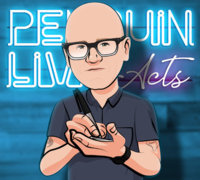 Today, when you order "Jay Sankey LIVE ACT", you'll instantly be emailed a Penguin Magic gift certificate. You can spend it on anything you like at Penguin, just like cash. Just complete your order as normal, and within seconds you'll get an email with your gift certificate.

"Jay Sankey has established a strong reputation as one of the top creators of innovative close-up magic." -Max Maven

"Jay will go down in history as one of the funniest, ground breaking, and most creative magicians of all time." –Nathan Kranzo

SIMPLY LETHAL: Powerful close-up mentalism that is easy to do.

For more than 30 years, Jay has entertained audiences at private events, trade shows, hotels, banquets and corporate functions all over the world for such clients as Honda, McDonald's, Toyota, Club Med, Manulife Real Estate, Chrysler, Panasonic, Labatt Breweries, Brand Voice, Cyanamid, Amp of Canada and Coca-Cola.
Jay has also appeared on many television networks including CNN, CBC, CTV, TVO, Bravo, Discovery and Japan's NHK channel.
As a creative consultant, Jay has worked with many of the world's most famous magicians including David Blaine, Criss Angel and David Copperfield, as well as consulted on several television series including AMERICAN GODS and IMPOSTERS.
And as a public speaker, Jay has presented talks and run workshops on persuasive communication, creativity and the psychology of belief in Canada, United States, England, Germany, Denmark, France, Holland, Italy, Spain, Australia and Japan. For more information about Jay's corporate talks visit SankeyTalks.com
Jay also holds the world's record for creating more original illusions than another other living magician.
And the magic and comedy videos featured on his popular SankeyMagic YouTube channel have been watched by more than 30 million people, and attracted more than 350,000 subscribers.
Working with Cream Productions, Jay even created a multi-layered social deception and convinced crowds of people in Toronto's Kensington Market that the world famous CN Tower had mysteriously vanished into thin air!
As an author, Jay has written several books on performance theory, including 'Zen and the Art of Stand-Up Comedy' and 'Zen and the Art of the Monologue,' both published by Routledge Press in New York.
Jay lives in Toronto with his wife Lisa, and two children Mason and Madelaine.

Purchase this product and on December 22nd anytime after 12:00pm Eastern, click the MyPenguinMagic area at the top of the Penguin site. You'll see the "learn" button appear next to this lecture.

Solid Sankey Material Report this review
Verified buyer Pro Privacy ON (login to see reviewer names) on March 15th, 2020
I have yet to meet a Magician or hobbyist that does not know who Jay Sankey is. Hes definitely a stalwart in the community. His effects are always organic. Where so many 'high tech" gimmicks are being sold, Sankey will show you how to use every objects to make extraordinary effects.

This Live Act was classic Sankey. While I didn't find any one particular effect that stood out for me, his lessons on the psychology of performance and persuasion is something any performer on a large auditorium scale or an intimate living room scale can benefit from.

The recording was not in the usual Penguin Live Studio and so I found the camera angles and audio quality were not as good as other live act recordings. Although Sankey wears a headset I just found the slight echo and lower the expected volume annoying as time passed. The camera angles and lighting were also not the best given the venue space.

In any event, I'm a Sankey fan and so despite the audio and video nuances...this is a good Live Act to download if you're looking to improve your performance skills, audience management and communication while learning some great effects done with everyday and accessible objects.

Audio dosent do justice Report this review
Pro Privacy ON (login to see reviewer names) on March 16th, 2020
A master class by a master magician unfortunatly compared to other liveacts from penguin ,lacks the good audio quality that one has become use to .Sankey over delivers like always 100 recomended if youre willing to deal with the audio
1 of 2 magicians found this helpful.
Did this review help you? Do you want to respond to this review?
Bestsellers