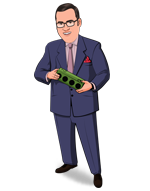 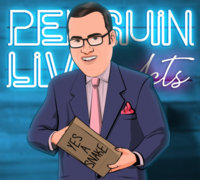 Today, when you order "Scott Green LIVE ACT", you'll instantly be emailed a Penguin Magic gift certificate. You can spend it on anything you like at Penguin, just like cash. Just complete your order as normal, and within seconds you'll get an email with your gift certificate.

"Scott Green is a talented magician and a really funny guy. His original routines are unique, witty, and creative. You will learn a lot from this lecture." -David Kaye (Silly Billy)

"Scott Green has some modern ideas about family entertainment that give you that rare “aha!” moment. A great thinker and a clever performer." -Carisa Hendrix

"Scott is a master of his craft and has a keen eye for elevating the art with the type of details that many miss. Top notch performer, amazing lecturer." -Mario “The Maker Magician” Marchese

"Anyone who can turn an old magic effect into a story about a family member being a klepto is alright in my book." -Bizzaro Galore

"Scott is sharing things I would have kept to myself!" -Stephen Bargatze

"Scott Green is a great performer, thinker and innovator. I love his thought process on routines and you will too!" -Ken Scott

"Every magician, whether performing for children or adults, will gain huge amounts of knowledge and inspiration watching Scott Green work. His routines are full of unexpected twists and turns that provide satisfying, fresh takes on even the most over-performed effects." -Christopher Barnes (Christopher T. Magician)

"I have a rule of thumb: If Scott Green puts out material on entertaining children, just get it—no questions asked, it’s a no-brainer. Scott really knows his stuff!" -Mike Bent

Underpants Opener—a new use for an old prop that establishes your character and teaches the audience what to expect and how to behave for your show by seemingly putting the children in the drivers’ seat.

Not-A-Snake—a hilarious sucker trick the children will bite hard on that has adults at the edges of their seats to see how you'll inevitably flip the script and fool everybody.

Bank Night—inspired by Stephen Bargatze’s excellent I Hate Kids routine (and with Stephen’s endorsement), this one-in-a-hundred bank night makes the whole audience think you’ve merely set them up for a joke… until the super strong kicker. Uses a simple method every magician already knows how to do.

Grandpa Was A Kleptomaniac—a hysterical Mutilated Parasol routine in which every element is motivated.

Rocket Book—a literal twist on a familiar principle—however the book is turned, the pictures remain right-side up. Also incorporates a single Topsy Turvy Bottle for a kicker ending that gets audiences screaming.

Spirit Slates/Rising Wand—a classic of spiritualism gets a hilarious makeover, thanks to a well-motivated magic wand.

Crayon Trick—a closer in which the magician seems to teach the audience a magic secret, until an impossible twist that’s been in plain sight since the beginning of the show.

Scott Green is a full-time family magician. He’s also the author of a breakthrough book on family magic, a popular lecturer at conventions across the country, and the creator of a number of top-selling innovative routines.

Among his fans is Teller, who loves Scott’s book, “Excellence in Family Magic” (a fact Scott learned on-camera during taping of his Fool Us appearance.)

Scott’s breakthrough was in focusing not on children’s magic but on magic for the whole family—effects simple enough for children to understand but strong and interesting and funny enough for the grownups.

That’s why Scott has a ton of TV appearances—aside from Fool Us he’s also often seen on ABC, NBC, CBS, FOX, WGN, ESPN and the CW—and was even the team magician for an NBA franchise. His style is fun for audiences and, best of all, it’s fun to perform.

He's the most sought-after family magician in Chicago and because parents love his shows as much as children, he’s able to command much higher fees than his competition. He does hundreds of shows a year and turns down hundreds more.

Scott lives with his wife and two children. He has a law degree he’s never used and has been a contestant on four game shows, including “Who Wants To Be A Millionaire?” and “The Price Is Right.”

Purchase this product and on February 2nd anytime after 12:00pm Eastern, click the MyPenguinMagic area at the top of the Penguin site. You'll see the "learn" button appear next to this lecture.

Yeah, 5 stars... Report this review
Pro Privacy ON (login to see reviewer names) on January 20th, 2020
...On the preorder - why? I’ve purchased almost all of these individually, they’re all workers, done in shows- love em. I don’t think his bank night was released before this live act but it exemplifies his style, which keeps both kids and parents entertained- he’s probably had the biggest effect on both my main children show and new library show. Did a recent parlor show, mother not a fan of magic...Snake, No Snake made her one, two thumbs way up!!
1 of 1 magicians found this helpful.
Did this review help you? Do you want to respond to this review?

Highly Recommended! Report this review
Verified buyer Pro Privacy ON (login to see reviewer names) on February 11th, 2020
Scott is fantastic at creating original premises for classic routines and structuring those routines into great showpieces. I've seen him get literal gasps with his rocket book routine. Don't hesitate on this one!
1 of 4 magicians found this helpful.
Did this review help you? Do you want to respond to this review?

Highly Recommended! Report this review
Verified buyer Pro Privacy ON (login to see reviewer names) on February 11th, 2020
Scott is fantastic at creating original premises for classic routines and structuring those routines into a great showpieces. I've seen him get literal gasps with his rocket book routine. Don't hesitate on this one!
1 of 5 magicians found this helpful.
Did this review help you? 1 comment

Highly Recommended! Report this review
Verified buyer Pro Privacy ON (login to see reviewer names) on February 11th, 2020
Scott is fantastic at creating original premises for classic routines and structuring those routines into a great showpieces. I've seen him get literal gasps with his rocket book routine. Don't hesitate on this one!
1 of 6 magicians found this helpful.
Did this review help you? Do you want to respond to this review?
Bestsellers