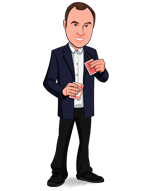 Today, when you order "Blue Illusion by Yarden Aviv and Mark Mason", you'll instantly be emailed a Penguin Magic gift certificate. You can spend it on anything you like at Penguin, just like cash. Just complete your order as normal, and within seconds you'll get an email with your gift certificate.

(6 customer reviews)
+ Add to Cart
Review Wishlist
In stock: usually ships within 24 hours!
Order in the next 6 hours 27 minutes and it will ship TODAY!
Tweet

"Shut up and take my money."
- Eric Jones

"I must say that this looks so good. It is by far the cleanest ALL-AROUND color-changing card box I have ever seen."
- Mark Mason

BLUE ILLUSION IS AN EYE-POPPING MOMENT OF MAGIC, WITH NO COVER.

A BLUE Bicycle card box is picked up off your table. It is shown to your audience in the fairest possible manner; no cover of any kind.

The box is opened, and a RED deck is slid halfway out. With just a wave, the ENTIRE BOX VISUALLY changes color to RED.

THIS REALLY HAS TO BE SEEN TO BE BELIEVED. ALL 6 SIDES CAN BE SHOWN.

The deck is removed and spread face up. Your spectator names ANY CARD; NO FORCE of any kind. NO COVER.

The freely named card is flipped face down. It is the ONLY BLUE-BACKED CARD in the ENTIRE DECK.

The named card is flipped face up and laid on the red card box. The deck is shown; there are no other BLUE CARDS in the deck.

At this point you explain it's all been an illusion.

The box was NEVER BLUE, there are NO BLUE cards in the deck and finally the card they named was also never blue -- the SPECTATOR turns over the card themselves; IT IS NOW RED!

This is work seriously Report this review
Verified buyer Pro Privacy ON (login to see reviewer names) on December 18th, 2019
It’s very clever idea 💡 and with little practice you will learn that.the only problem why I give this 4 stars is mark never explain how to repair the gimmick.
3 of 4 magicians found this helpful.
Did this review help you? 5 comments

The Gimmick isn't well designed Report this review
Verified buyer Pro Privacy ON (login to see reviewer names) on December 23rd, 2019
Without giving away the methodology of the gimmick, I can say it never completes the process because the "gimmick" isn't strong enough. It leaves 100% of the time an outlying, clearly visible flap along the edge.

I'm going to have to try to figure out how to strengthen those now, because this will never work with how weak the "gimmick" strength is. Or maybe mine is just badly designed?
2 of 2 magicians found this helpful.
Did this review help you? Do you want to respond to this review?

blue illusion Report this review
Verified buyer Pro Privacy ON (login to see reviewer names) on December 23rd, 2019
I hate giving bad reviews but this gimmick came apart ont he first attempts to use it. the crease on the box started tearing apart. I really like the idea behind this but the gimmick is to fragile to last very long. I tried taping it but then the box looks really tampered with. Sorry If they come up with a stronger box i might try it again...
2 of 2 magicians found this helpful.
Did this review help you? Do you want to respond to this review?

Wow! Report this review
Verified buyer Pro Privacy ON (login to see reviewer names) on December 23rd, 2019
I am having so much fun with this effect! I fooled myself the first time I did it.
All you need is a new deck of cards to match the included box and you are good to go. Set up is nominal. The trick itself is soooo simple to do and soooooooo powerful to your audience.
Do yourself a favor and get this one. You will use it for years to come.
1 of 1 magicians found this helpful.
Did this review help you? Do you want to respond to this review?

Best color changing box ever! Report this review
Pro Privacy ON (login to see reviewer names) on December 25th, 2019
Received this as a gift from my mentor and I wasn’t sure about it at first but once I played with it I realized this looks amazing! It works seamlessly with R. Paul Wilson’s Spectrum deck which gives a great reason to do a color change on the box! The secret is not complicated but there is one little thing that may not happen every time. But practicing in front of a mirror showed me that when that little thing doesn’t happen they can’t see it any way and a very light touch will solve the issue on that side. But this really is an all around change! Once it changes then it can be shown on every angle. Even before the change there is very little to hide. Totally recommend this!
Did this review help you? Do you want to respond to this review?

Great but incomplete Report this review
Verified buyer Pro Privacy ON (login to see reviewer names) on December 22nd, 2019
For the price, I think this should ship with the box completed and a deck of cards inside. Box is easy enough to complete, but since I don't do card tricks I couldn't practice this until I bought some cards. No big deal but irritating. Otherwise this is great.
0 of 2 magicians found this helpful.
Did this review help you? 2 comments
Bestsellers