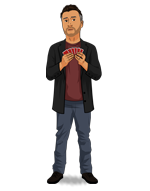 Today, when you order "Imagination Deck by Vinny Sagoo (Neo Magic)", you'll instantly be emailed a Penguin Magic gift certificate. You can spend it on anything you like at Penguin, just like cash. Just complete your order as normal, and within seconds you'll get an email with your gift certificate.

Take the spectator's mind on an imaginary journey with a BLANK DECK, ending with their selection physically appearing!
+ Add to Cart
Review Wishlist
In stock: Download INSTANTLY.
Tweet

You show a deck of cards that is BLANK on both sides, cutting and shuffling as you go.

You ask the spectator to imagine ANY card in the deck. You hand the deck to them and ask them to deal down to the value and suit, putting the deck back on top so you don't have a clue.

You then take out 3 cards to represent the Colour, Value and Suit of the imaginary card.

The spectator is looking at you rather bizarrely as you have just shown 3 double blank cards claiming that they represent the Colour, Value and Suit.

You ask the spectator what card they are mentally thinking of?

Let’s imagine that they say the 5 of Hearts.

Holding the packet of 3 cards, and in an instant, their thought of 5 of Hearts magically APPEARS in the middle of the packet.

You then turn their selection over, which instantly turns BLANK and is returned to the pack for another day!

This is one of my FAVOURITE effects to perform walk around as there are so many magical moments involved.