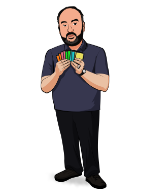 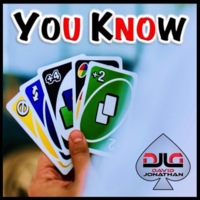 Today, when you order "You Know (UNO) by David Jonathan", you'll instantly be emailed a Penguin Magic gift certificate. You can spend it on anything you like at Penguin, just like cash. Just complete your order as normal, and within seconds you'll get an email with your gift certificate.

A Baffling Demonstration of Foresight With UNO Cards!

You Know is a mind-boggling demonstration of mentalism using regular UNO Cards. This powerful prediction effect is so FAIR, so DIRECT and so utterly baffling. David Jonathan has dusted off a long-forgotten and criminally underused principle, and modernized it with delightful new twists to create an unbelievable hands-off prediction that is INCREDIBLY EASY to perform!

The Effect:
After briefly bringing attention to an envelope in your pocket, you introduce a pack of UNO cards. A participant then names one of the four colors in the deck as their target color. They then take all the cards and genuinely shuffle them into a truly random order. Looking through the shuffled deck, they remove the first three cards of their target color that they come to. The numbers on these cards are added together to arrive at a total. You then remove the envelope from your pocket to show one number was written on it, which matches their total!

But that’s not all!

You now open the envelope to show that you also correctly predicted the COLOR and the EXACT THREE NUMBERS they had arrived at!

You Know
is a super fun and unique change of pace from run-of-the-mill card tricks. While this effect was designed for UNO cards, it can be easily adapted to playing cards. You will also learn a variety of extra ideas to incorporate the concepts into other routines like book tests, pin code revelations and more! Download now to learn one of the strongest effects with a pack of UNO cards!

"David Jonathan is one of my favorite creators... and this is one of the very BEST effects I’ve reviewed in a long time, and the BEST effect for the money. It’s an absolute steal."
- Rick Carruth (The Magic Roadshow)

"This effect is an almost perfect example of a great self-working trick. It gets my highest recommendation for anyone who loves impactful magic with a theme that suits both adult and children audiences. 10/10!"
- Alex Hui (Alex Magic Review)

"I have added this to my repertoire and I expect it to stay there. It is very easy to perform, sleight free and it is impossible to back track. 9/10"
- Straight Talk Magic Reviews

"This is my favorite effect of the year."
- Rob Jacks

"A perfect close up prediction routine. Easy to learn, yet the outcome is super mind-blowing. No unnecessary procedure, this looks exactly how a prediction should look like!"
- Miss Katalin

“David Jonathan is a very creative magician. I never knew you could have such a strong magical effect with a deck of Uno cards."
- Chinese Magic Reviews

You Know Report this review
Verified buyer Pro Privacy ON (login to see reviewer names) on January 27th, 2020
Follow the instructions, practice, and you will fool your guests. Visual with UNO cards and easy with several outs.
3 of 3 magicians found this helpful.
Did this review help you? Do you want to respond to this review?

Cool trick! Report this review
Verified buyer Pro Privacy ON (login to see reviewer names) on February 1st, 2020
I like this one. I like the idea of using Uno cards. On a side note, I also learned how to play UNO. This trick is easy to do and I have been getting great reactions. I know it is a good trick when people say “how?” Get this, you will not be disappointed.
2 of 2 magicians found this helpful.
Did this review help you? Do you want to respond to this review?

Fantastic Report this review
Verified buyer Pro Privacy ON (login to see reviewer names) on January 31st, 2020
Great routine that is well taught and easy to do. David teaches several great variations and other ways to use the underlying principle which has always been one of the best and most overlooked principles in magic IMO.
2 of 2 magicians found this helpful.
Did this review help you? Do you want to respond to this review?

yUNO IT Report this review
Pro Privacy ON (login to see reviewer names) on February 9th, 2020
It has a nice hook. It gets away from regular cards for a bit (which is nice) but can be done with regular cards too (which is also nice). The principle is clever and fooling. this can be done almost totally in the spectators hands and the small part you do may not even be remembered as you are simply showing them what to do. Crediting is given (almost 100 years ago) and in the end you have a great cross between a mentalism effect and a multiple prediction card effect that will fit into either genre of magic (or both together).

The effect itself is easy in that there are no knuckle busting card moves (and no Elmsley Counts) :-) The spectator can really do 95% of the work. I think for me, I will grab an UNO deck and show this to some younger folks and use it as a nice opener using an "everyday item" (of course I grew up in an era where everyone owned and still owns an UNO deck) then I can lead them down the path to regular card/coin effects.

One of the really nice aspects of this effect is that it has multiple kickers, without overdoing it and the prediction is in plain sight thru the effect. Also, you can easily show "proofs" that several simple different choices along the way would have resulted in a different outcome than the written prediction. Pocket space is very minimal other than the UNO deck, which could be borrowed.

The teaching video is a private Vimeo clocking in at just over 40 mins with a timestamp menu in the beginning. It is very well put together and not full of "Fluff" or the dreaded "overexplaining". Different details that you probably want to write down or take notes is boldly and colorfully left onscreen long enough to hit pause and copy down the part you need.

All that said, I did get a review copy to look over, give feedback and post a review (optional). Those who know me also know my reviews are non biased and if I see a problem or a flaw, I point them out. I would have given it 4 1/2 out of 5 stars simply because the UNO deck would be yet another deck to carry or borrow ---BUT--- I will give it a solid 5 out of 5 because he goes over how to do it with a regular deck, so - no extras if you choose the latter. It is not a long tutorial on the regular deck but the gist is a no brainer (substitute the 4 suits for the 4 colors and use the spot cards that match the UNO numbers. Not rocket science).

Then, to top it off. He figured a way to streamline the effect a little more and added it to the video as well as sent an updated PDF to those with the early copies. That, to me, shows real class. Buy this, it is honestly worth twice the price offered by Penguin.
1 of 1 magicians found this helpful.
Did this review help you? Do you want to respond to this review?

Get it! Report this review
Verified buyer Pro Privacy ON (login to see reviewer names) on January 28th, 2020
Amazing trick to perform with a deck of UNO cards.
1 of 1 magicians found this helpful.
Did this review help you? Do you want to respond to this review?

Excellent Prediction Effect Report this review
Verified buyer Pro Privacy ON (login to see reviewer names) on January 26th, 2020
A five-star prediction effect. Easy to understand and do. Very well taught. Can be done with regular playing cards as well. Everything examinable. Highly recommended.
1 of 1 magicians found this helpful.
Did this review help you? Do you want to respond to this review?

Ingeniously crafted Report this review
Verified buyer Pro Privacy ON (login to see reviewer names) on January 25th, 2020
David Jonathan has an extraordinary expansive mind for conceiving amazing effects! One of it's underlying secrets is a long lost and forgotten principle brought back to life presented through popular game cards that most of the populace can immediately recognize and identify with! There are multiple thematic
Connecting concepts in terms of presentation as a game of mentalism if you will via a game cards prediction! With many layers of impactful moments! check this & everything David J has out on the market !
1 of 1 magicians found this helpful.
Did this review help you? 4 comments

Excellent Instructions Report this review
Verified buyer Pro Privacy ON (login to see reviewer names) on March 17th, 2022
This is the first trick that I have downloaded from David Jonathan, and I was very satisfied with his explanation of the trick, and his excellent explanation of how to do the trick. At age 79 I am very happy to have the instructions stated very clearly and slowly; thanks for the great job David. I have just finished doing some of the prep work, and can’t wait to show the trick to my friends!
Did this review help you? Do you want to respond to this review?

Great way to force a date Report this review
Verified buyer Pro Privacy ON (login to see reviewer names) on January 19th, 2022
I do Gospel magic. I like to start by forcing the date I became a Christian. I have a calendar in full view, force the number, then have the guest look for that date and it has a big X on it. This method is a lot more fun for young audiences then my previous method. I am glad I made this purchase.
Did this review help you? Do you want to respond to this review?

Updated and better with added PDF Report this review
Verified buyer Pro Privacy ON (login to see reviewer names) on March 16th, 2021
I actually attended an online lecture with David Jonathan where he totally explained and basically gave away the method. Out of guilt and in support of working magicians I went ahead and bought the download video and am glad I did since it really fleshes out the method and presentation and gives great ideas. It also includes a PDF with some very cool suggestions regarding deck cutting. Note that there are lots of different Uno theme decks (I have a Star Trek version) so there's the chance to create fun variations on the specific theme. E.g., predicting BLUE - Spock - Sulu - Nurse Chapel in addition to predicting the sum of the card numbers. This is, in the end, a very FUN routine.
Did this review help you? Do you want to respond to this review?
Load more reviews
Bestsellers