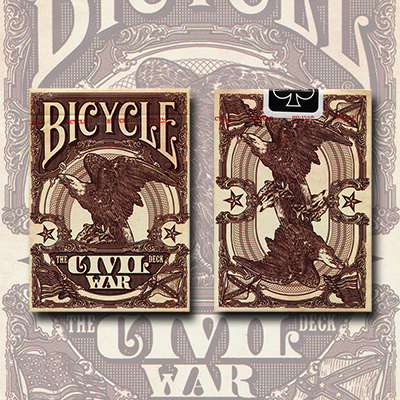 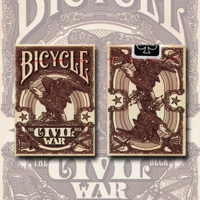 Today, when you order "Bicycle Civil War Deck (Red) by US Playing Card Co", you'll instantly be emailed a Penguin Magic gift certificate. You can spend it on anything you like at Penguin, just like cash. Just complete your order as normal, and within seconds you'll get an email with your gift certificate.

FREE SHIPPING TO UNITED STATES ON ALL ORDERS OVER $50.
+ Add to Cart
Review Wishlist
In stock: usually ships within 24 hours!
Order in the next 6 hours 56 minutes and it will ship TODAY!
custom-designed-decks
playing-card
Tweet

The court cards, card backs, and details are all rendered in the same engraved style as Jackson's popular Federal 52 Deck. Featuring players like Ulysses S. Grant, Robert E. Lee, Harriet Tubman, and more, this deck will make a historic addition to your collection!

Bicycle® brand decks are made in the USA and feature the patented Air-Cushion™ finish and softly beveled edges for enhanced game play.

Available in both red and blue.