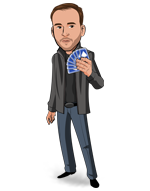 Today, when you order "Pin Thief by Jamie Daws", you'll instantly be emailed a Penguin Magic gift certificate. You can spend it on anything you like at Penguin, just like cash. Just complete your order as normal, and within seconds you'll get an email with your gift certificate.

​ REVEAL THEIR SECRET INFORMATION AND THEN STEAL THEIR CARD FROM RIGHT UNDER THEIR NOSE
+ Add to Cart
Review Wishlist
In stock: Download INSTANTLY.
Tweet

The idea that someone could know your deepest darkest thoughts is terrifying. But someone knowing the PIN to your bank account is even more frightening!

You ask the spectator to write down their PIN number. However, because of the sensitive nature of what is about to happen, they should change one of the digits. Once done, two more cards are introduced and on each, the performer has written "Computer Password" and "Internet History". Two more pieces of information the spectator might not want people to know!

Not only that, but the performer then whispers in the spectators ear and tells them which number they changed!

Finally, for a truly kicker ending, you prove that now you have their PIN, you can also steal their card. With a brush of the hand, the spectator discovered they are now only holding 2 cards!! Their PIN number has vanished and is found inside the performers pocket or wallet!

This is a killer routine, super commercial and great fun to perform! Filmed in the awesome Alakazam Studios, I am also joined by the incredibly creative Dave Loosley who also adds some brilliant little extras!


WHAT ARE PEOPLE SAYING ABOUT PIN THIEF?
​
"I love it and I will be using it!" - Dave Loosley (Alakazam Academy)

“Jamie has created a really solid routine here with a great emotional hook. The pin reveal is really strong and I just love the vanish of the ‘pin card’ from between their palms. A Worker!!!" - John Carey
​
"I would recommend you buy it as it’s a brilliant routine! It’s something you will definitely use!" - Phil Shaw