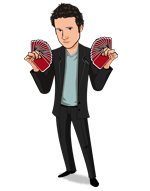 Today, when you order "Everlasting Sponge Balls (Gimmick and Online Instructions) by Eric Leclerc", you'll instantly be emailed a Penguin Magic gift certificate. You can spend it on anything you like at Penguin, just like cash. Just complete your order as normal, and within seconds you'll get an email with your gift certificate.

Sponges from the Mouth is the rare routine that plays as well for adults as it does for kids, is EXTREMELY deceptive yet easy to do, packs in your pockets yet can entertain 500 people, and can be learned and mastered before your very next show. This is Everlasting Sponge Balls.

Created by Eric Leclerc, Canada's two-time magic champion and host on National Geographic's Brain Games, this is a wonderful routine ready to be plugged into your children's show. Eric's use of the Finger Pointer Wand (which comes with the trick) adds to the deception and the fun! Watch the video! It's filmed in front of a live audience so you can see the tremendous impact of this routine.

Included is a detailed routine with all the components to create your own routine, or use the suggested routine that Eric performs! If you're looking for a routine that you can perform to music that features you alone on stage, a routine in which your props "get a bit out of control" resulting in magical hilarity, check out Everlasting Sponge Balls.
Questions about this product

Fun but a little incomplete Report this review
Verified buyer Pro Privacy ON (login to see reviewer names) on August 31st, 2017
This routine is cute and can play a good 5 or 6 minutes if you do it right. There are a couple of places that may or may not work for your kids show as you appear to be slapping a spongeball up your rear to pop out of your mouth, and the final reveal is a giant spongeball coming out of your rear as well. But if you are fearless and can really make it like a cartoon moment, it may fly by with no hesitation for you.

Joshua Jay comes on to give you his finale to the routine, and to me it plays a thousand times better and will almost guarantee you being rebooked. It does require one extra (preferably new) spongeball and a little preshow work, but it's worth it.

That being said, you will need to add a large black spongeball to your order to do the finale Eric shows you (a 2 inch spongeball is included, but his video shows a large one being produced and it does play better) and you'll also need a couple of other red 2 inch spongeballs for Joshua's finale (and it's worth it).

I can't say I'll play this exactly like Eric does, but combining it with Joshua's ending makes it an awesome routine.
11 of 11 magicians found this helpful.
Did this review help you? Do you want to respond to this review?

Good trick; not so good props. Report this review
Verified buyer Pro Privacy ON (login to see reviewer names) on December 27th, 2018
Love the routine but was a little disappointed with the props so minus a star. The white part on the end of the wand is just a piece of tape and despite what's seen in the trailer, the black sponge ball provided is the same size as the other sponge balls which makes the ending a little less impactful imo. Also, the online instructions are stream only which is annoying, you won't be able to watch it offline. Otherwise a great trick but if you've got the knowledge to create your own spongeball routines and are thinking of buying this just for the props maybe give it a miss and just buy your own wand and the different coloured/sized spongeballs you need.
5 of 5 magicians found this helpful.
Did this review help you? 2 comments

Marketing as a speaker Report this review
Verified buyer Pro Privacy ON (login to see reviewer names) on September 18th, 2019
This is just what I needed for my Speaking topic!
1 of 2 magicians found this helpful.
Did this review help you? Do you want to respond to this review?
Bestsellers