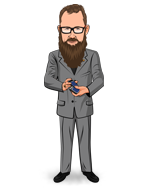 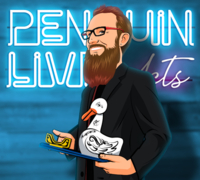 Today, when you order "Erik Tait LIVE ACT", you'll instantly be emailed a Penguin Magic gift certificate. You can spend it on anything you like at Penguin, just like cash. Just complete your order as normal, and within seconds you'll get an email with your gift certificate.

"A surrealist twist on a classic that updates an already powerful routine for a modern audience. The first time I saw this act was during a two hour gala show, I remember almost nothing of the rest of the show but I can still recall every beat of this. Just buy it already!" -Carissa Hendrix

"Erik Tait does card magic that I love. Why? Because it's entertaining and he is not afraid to use the right tool for the job."- Jon Armstrong

"Erik is a beast."- Brent Braun

"I count on Erik to teach me how to do the hard stuff. You should too."- Nick Locapo

"I've had the pleasure of sharing the stage with Erik a few times. If I go on before him, I ALWAYS stick around to see his fantastic show. If I go on after, I sit in the audience and watch, ignoring that fact that I should be preparing for my own set. His magic is top notch, but you know that! Now watch and learn how Erik adds humor that's sometimes subtle (and brilliant) and sometimes in your face to magic that slays. You'll be a better performer for it." - David McCreary

"Erik is a compelling and bizarre performer. He brings tricks you think are close up to the stage and turns classics on their heads. I'm always excited to see Erik's show." -Michael Feldman

The Strangest Thing - A new presentation for the magnetized cards. The magician is able to make the cards stick to their hands just by holding their breath.

Nick The Duck - An adult presentation for the card duck prop. A card is selected, and returned to the deck that is shuffled by the audience. A wooden duck is introduced, that smokes and can light a fire with it's mind. A hilarious routine gets the entire audience chanting "Nick The Duck" like they are at a rock concert, before the duck strikes and plucks the selected card out of the deck.

Free Association - A book test that divorces the book from the routine, and allows the performer to flex their improv comedy skills.

Silk To Egg To Fish To Watch - A silk to egg routine that includes a fish and ends with an audience member's watch being produced from an egg.

Erik Tait has won awards for both standup comedy and magic throughout North America. He graduated with honors from the prestigious Humber College Comedy Writing and Performance program, which means Erik can academically prove why he is hilarious. Beyond that, Erik is the only magician in the world with a degree in funny. He has put academic theory into practice on some of the most prestigious stages in the world, including The Magic Castle, Second City Toronto, and the Hollywood Improv. His client list has some of the most recognizable brands in the country including Honda, Macy's, and Bark Box.

Erik has also earned raves as an acclaimed burlesque host in both Los Angeles and across the Midwest. In recognition of his talent, Erik won the title "Master of Comedy" at the Burlypicks International Burlesque and Variety Arts Competition. Erik's quick wit and easy-going demeanor have made him the perfect host of Quiz Box, the popular live game show that plays to packed audiences at Columbus, Ohio's Shadowbox Live. But Erik has not restricted his creativity to live performances. As both artist and writer, Erik is the creative force behind the beloved web-comic "Beatnik Beat" and has been featured on Sirius/XM radio. His debut standup album, Nerd is the New Black, is available on iTunes.

As host of "The Penguin Magic Podcast" Erik has interviewed some of the top names in magic.

Whether it's standup, magic, or hosting, you will not want to miss this hilarious, multi-talented performer!

Beautiful Just Beautiful Report this review
Verified buyer Pro Privacy ON (login to see reviewer names) on August 12th, 2020
I don't know what to say. Erik Tait is so funny. His acts are great. I cant do most of the tricks because I don't have the gimmicks but just watching him has made this the best. Only 1 1/2 of them is gimmick less.Hes smart and funny and everything he says is funny. Worth the price to watch. But most of his stuff teaches you how to allow your routines to grow and improve.
3 of 3 magicians found this helpful.
Did this review help you? Do you want to respond to this review?

To 10 Acts of the Year ! Report this review
Verified buyer Pro Privacy ON (login to see reviewer names) on July 29th, 2020
All I could say is that Erik Tait is one of the worlds best magic Representatives on the contemporary magic scene !
there are some amazing effects on this session!

Get everything Erik shares on the magic marketplace!

By studying his methods you will evolve exponentially to the next level from
Such a consummate model of artistry!
To paraphrase Einstein's quote

" simple not simpler"
3 of 3 magicians found this helpful.
Did this review help you? Do you want to respond to this review?

Very funny Report this review
Verified buyer Pro Privacy ON (login to see reviewer names) on October 10th, 2020
This magic packs small and plays big. it is all fairly easy to do. He is very funny. This is a full 30-minute show you can do out of Dr Bag.
2 of 2 magicians found this helpful.
Did this review help you? Do you want to respond to this review?
Bestsellers 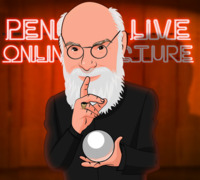