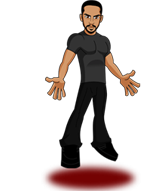 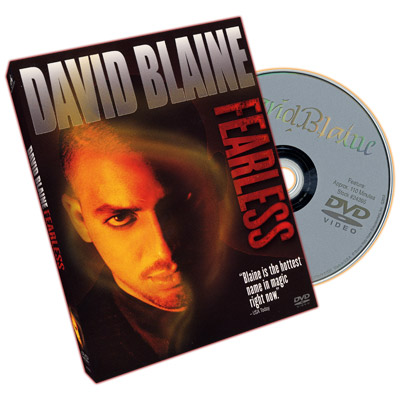 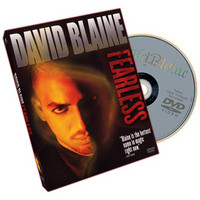 Today, when you order "Fearless by David Blaine", you'll instantly be emailed a Penguin Magic gift certificate. You can spend it on anything you like at Penguin, just like cash. Just complete your order as normal, and within seconds you'll get an email with your gift certificate.

The magic, wonder and intrigue of the mystifying David Blaine are now on DVD with the best of his three TV specials: Street Magic, Magic Man, and Frozen In Time.

The world is his stage, and watching Blaine's mastery is a magical mystery tour de force, whether he is on the streets of New York City or in the primitive jungles of South America. Prepare to meet ordinary passersby as they encounter extraordinary one-on-one magic as never seen before.

Magic has a new master. He is Fearless, and his name is David Blaine.

David Blaine! Report this review
Pro Privacy ON (login to see reviewer names) on April 10th, 2010
I am not afraid to admit that I am a HUGE fan of David Blaine. My parents used to tell me about how great the specials were and every time they would come on TV, my parents would have me watch. This was a BIG factor in causing me to stick with magic, and so not only is this DVD a fantastic collection of good street magic specials, but also a great DVD of reminiscing of when I was a kid.

I really like David's magic and he really revolutionized the way that we saw it on TV. He pushed the envelope and really is someone to be respected.

This DVD is worth it's weight in gold. Highly recommended.
Did this review help you? Do you want to respond to this review?

For Blaine Fans Report this review
Pro Privacy ON (login to see reviewer names) on April 9th, 2010
If you are like me and really enjoy watching David Blaine perform, then this is a great DVD. It is his first two television specials on DVD. This isn't an instructional video though but still fun to watch. David Blaine was a reason I got into magic (probably like many magicians) and even now when I see it, it inspires me. Pick up this DVD and you'll really enjoy it.
Did this review help you? Do you want to respond to this review?

Good Report this review
Pro Privacy ON (login to see reviewer names) on April 6th, 2010
If you are a fan or respect the work of Blaine you will like this DVD. You will not learn magic here but you will have the classic street magic performed by by him. There are things to learn from this DVD and I still find it entertaning to watch from time to time. A nice addition to your DVD library.
Did this review help you? Do you want to respond to this review?

The begining of commercial Street Magic. Report this review
Pro Privacy ON (login to see reviewer names) on April 5th, 2010
We all have to thank David Blaine, for making magic what it is today, you want inspiration watch this. Yeah we all know the tricks and all, but no one has done it like this. Magic at it's finest and purest.
Did this review help you? Do you want to respond to this review?

really inspiring Report this review
Pro Privacy ON (login to see reviewer names) on April 5th, 2010
One of my most favorite things to do in magic now, is not to learn. It's actually just watching other people perform. THis inspires me to go out and do what I love doing the most. Obviously, performing. It's just incredible to watch David get such good reactions from random strangers.

THe production value of this is great. Crystal clear, shot professionally, real time performances. I only saw 2 of David's specials, and one of which hooked me on magic so to watch the guy who inspired me is incredible. I'm sure from a performance aspect of this DVD, you will love it. It's even just fun to watch at random times to get you going again like I do

Overall, I would give this a 5 because there isn't much to go by to go less. It's simple, fun, and inspirational, like I said. Good work!
Did this review help you? Do you want to respond to this review?

The Revolution will be televised Report this review
Pro Privacy ON (login to see reviewer names) on February 10th, 2010
David Blaine's Fearless DVD is a showcase of his first 3 televised magical performances with everyday, normal (some not, haha) people on the street and it really kick started and reignited the embers for performing magic for strangers and using the world as your stage. I'm not going to lie and say this didn't change my point of view or how I wanted to approach magic. He completely blew me away, as well as the spectators with his own unique style of approaching strangers and showing them something I don't think they will ever forget.

Almost all of the effects performed can be purchased, so an aspiring young magician who watched this and then wanted to learn the arts of magic, David Blaine was the man to do so. Ever since then, there have been others who have attempted to try and do what does when it comes to magic, but they just don't have the same impact or the real drive to walk the streets of America and astonishing people all at the same time. So I highly suggest buying this if you don't already own it. You learn just one card effect, which is done so by the DVD menu, but regardless, if you're a fan of magic or a magician and has yet to see any of these performances, buy this right now!
Did this review help you? Do you want to respond to this review?
Bestsellers