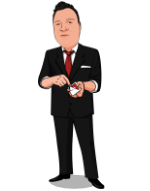 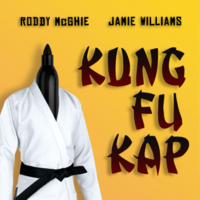 Today, when you order "Kung Fu Kap by Roddy McGhie and Jamie Williams", you'll instantly be emailed a Penguin Magic gift certificate. You can spend it on anything you like at Penguin, just like cash. Just complete your order as normal, and within seconds you'll get an email with your gift certificate.

A mid-air miracle. Toss a Sharpie cap in the air, and stab it with the marker. Everything in full view. EACH UNIT HAND-MADE BY RODDY McGHIE.

The mind of Roddy McGhie and Jamie Williams is where quirky effects become visual miracles that get gasps from your audience. Quick visual magic is one of the best ways to sprinkle extra effects throughout your routines, and if you want to give your signed card effects some extra kapow, look no further than Roddy McGhie and Jamie Williams Kung Fu Kap.

Kung Fu Kap is the perfect addition to any signed card routine. Once you’ve had the card signed you take your marker back and offer to show them a quick stunt. You claim you can toss the cap in the air and then in one swift motion re-cap the marker just by stabbing the cap out of the air. You toss the cap in the air, but instead of it landing perfectly re-capped you stab the marker through the cap! The marker visually goes through the cap, which can then be handed out for examination.

Kung Fu Kap comes with the specially gimmicked cap, and a matching marker. You’ll learn in detail from Roddy how to make this minor miracle play huge. This is the perfect addition to your ambitious card routine, or any time you need an audience member to sign anything. Easy to do, and it resets in a snap. This is Roddy McGhie’s and Jamie Williams Kung Fu Kap.

Kung Fu Kp by Roddy McGhie and Jamie Williams Report this review
Verified buyer Pro Privacy ON (login to see reviewer names) on July 13th, 2020
I have a Kung Fu Cookie and of course a Kung Fu half dollar (Karate Coin) which most of us have. The Kung Fu Kap is a totally unexpected effect from the point of view of the spectators. This is a well made if not simple gimmick and it gets laughs with various patters. It works just like it is advertised. It is a fun ice breaker to use during a table or small group approach. Great angles and with a little practice this is a short but killer opener.
3 of 3 magicians found this helpful.
Did this review help you? Do you want to respond to this review?

Kung Fu Kings of Magic! Report this review
Pro Privacy ON (login to see reviewer names) on June 25th, 2020
Short and sweet but to the point!


Bought this at the lecture and it went straight in to my set, a quick easy to do effect, and a bargain! Awesome well done guys!
2 of 2 magicians found this helpful.
Did this review help you? Do you want to respond to this review?

probably the best karate stab trick there is Report this review
Pro Privacy ON (login to see reviewer names) on November 18th, 2022
I always had an issue with the karate coin effect as its all about swapping and hiding the gimmick and they cant keep it etc.
What i love about this is it solves all those issues. It is your pen but they have been using it the whole time, so you dont have to worry about it being kept or examined etc.
A underated gem .

Genuinely think Jamie needs to do a Penguin lecture as he clearly has some amazing ideas that need to be seen.
1 of 1 magicians found this helpful.
Did this review help you? Do you want to respond to this review?

saw this in his lectue and laughed so much Report this review
Pro Privacy ON (login to see reviewer names) on October 26th, 2022
Jamie performed this a few nights ago at his lecture and had five of us up taking part, dancing and twirling and it was so funny , such a good and better routine then whats on the DL.
This is so easy to do and the idea to give them a sharpie with your business sticker on it at the end is a brilliant idea
1 of 1 magicians found this helpful.
Did this review help you? Do you want to respond to this review?

Jeeze this is easy and fun Report this review
Pro Privacy ON (login to see reviewer names) on July 4th, 2022
Picked this up after seeing an online review and it getting 5 stars. I dont tend to perform things like this but did the "lets play a game routine" i saw on line and it was great fun.
this gives you all the time you need to do the load and it gets a whole table up and enjoying it.
And for a very low price its a hidden gem
1 of 1 magicians found this helpful.
Did this review help you? Do you want to respond to this review?

On point! For a middle road effect. Report this review
Verified buyer Pro Privacy ON (login to see reviewer names) on December 9th, 2020
Decent build, been practicing dropping the gimmick and it seems to be holding up. Nothing much to this it does what the trailer says. The instruction is concise.( I omitted clear because there is a a Scottish accent to understand while not the thickest I ever heard it did have me taking pause to re listen to a few things.)
I bought this for segue to an effect which I’ve yet to purchase.
It can be done pretty easily and the angles are pretty easy to deal with.
It’s a middle of the road effect that can be done as a one off but works best for a lead in chuckle or perhaps a throw away finale to an effect using a sharpie, you know, to reiterate that your magi” is on point.“
Smilesotheylikeyou
1 of 1 magicians found this helpful.
Did this review help you? Do you want to respond to this review?
Bestsellers