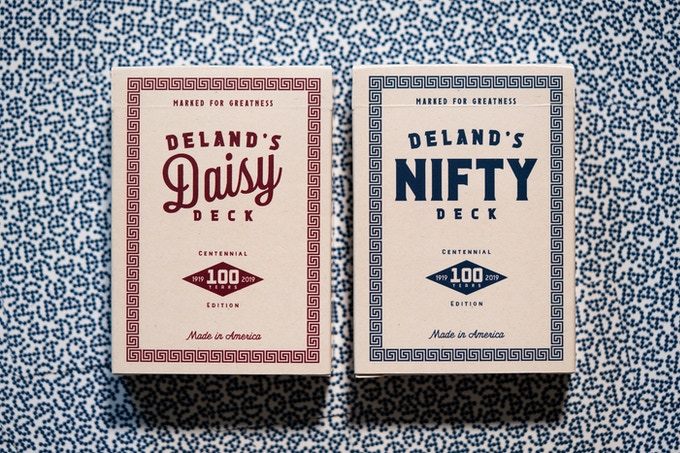 Today, when you order "DeLand's Centennial Edition", you'll instantly be emailed a Penguin Magic gift certificate. You can spend it on anything you like at Penguin, just like cash. Just complete your order as normal, and within seconds you'll get an email with your gift certificate.

A 100-year-old marked deck, recreated and improved for the 21st century. Designed by Phill Smith, printed by USPCC.

This is a limited "Stripper Deck" version of the DeLand Centennial that has been factory-cut with a taper to allow a wide variety of magic tricks to be performed.

The DeLand Centennial project brings two amazing decks of marked playing cards back to life. Originally printed in 1919, the Daisy Deck and Nifty Deck were created by Theodore DeLand. In honor of their 100th anniversary, we have recreated these ingenious decks from the ground up.

We have teamed up with renowned magician, graphic designer, and marked deck expert, Phill Smith (creator of the DMC ELITES) to create these stunning Centennial Editions. These are not simply reprints - each deck has been painstakingly redrawn and enhanced with new art and new features.

Origins:
Theodore DeLand was a genius creator and innovator in the magic world. DeLand lived from 1873 to 1931. Before departing this world, he left behind an enormous collection of mind-boggling creations. His best-known work is the "Dollar Deck", a groundbreaking marked deck of cards.

Few are aware that DeLand actually created many marked deck designs in addition to countless magic tricks. Originally offered in 1919, the Daisy Deck and Nifty Deck appear to be simple, innocent cards at first glance - but each deck holds many secrets waiting to be decoded.

Backs:
Each deck has a full-bleed borderless back design that looks right at home on the poker table. We have meticulously recreated each design to be faithful to the original, while making small changes to make the decks more useful for the modern performer.

To offer them as a complimentary pair, the Daisy Deck has been designed in a deep Burgundy and the Nifty Deck is dark Blue.

Markings:
Not only is each deck marked to tell you the Suit & Value of every card, but there are other secret marks as well. We have expanded upon the core design originally created by DeLand and taken it a step further. In the Centennial Edition, each deck has OVER 500 MARKS in total. A quick glance at any card back will tell you the identity of not just one, but THREE different cards, as well as how many cards are left in a pile.

Every deck comes with an instruction card that will teach you how to decode the markings, as well as access to an instructional video by Kevin Reylek. The systems are hard to detect but are simple to learn and can be mastered with moderate practice.

Tuck Boxes:
The tuck boxes feature all-new, 100% custom designs that deliver a vintage vibe that has been elevated with a touch of modern elegance. Each deck also has a custom sticker seal.

Faces:
We absolutely LOVE vintage card faces. Both the Daisy Deck and Nifty Deck have gorgeous custom faces based on designs from the early 20th century.

The faces have been completely redrawn for modern printing, but fully capture the essence of vintage designs, including subtle asymmetry and small imperfections.

The Ace of Spades and Jokers are faithful recreations of DeLand's classics.

Stack:
The deck comes in Si Stebbins stack direct from the factory, allowing you to perform a number of diabolical effects.

Printing:
Have you ever tried to fan or shuffle a 100-year-old deck of cards? It's not easy! Manufacturing techniques have improved immeasurably since the original 1919 decks, so one of the biggest upgrades that the DeLand Centennial offers over the originals is the handling quality.

These were printed with the US Playing Card Company on a Classic stock with top-of-the-line coating for the ultimate performance for magic, games, cardistry, and more. The decks are traditionally cut. This means that the cards are cut from face to back, which creates a minuscule yet important edge bevel that aids in executing card moves flawlessly.