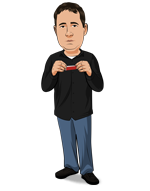 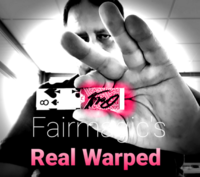 Today, when you order "Fairmagic´s Real Warped", you'll instantly be emailed a Penguin Magic gift certificate. You can spend it on anything you like at Penguin, just like cash. Just complete your order as normal, and within seconds you'll get an email with your gift certificate.

A Card Warp effect that ends with an 'impossible' signed card with half turned face-out and the other half back-out.

Effect: A playing card is folded and then signed by a spectator. This folded and signed card is inserted between another folded card, just like in the classic Card Warp effect. Then the inside card is pushed from left to right and from right to left. First the direction of the white border of the card's back switches position. Then one half of the card turns face outward. At this point the folded and signed card can be handed out as souvenir to the spectator. It will have one half face outward and the other half back outward - impossible!

There are no glues, magnets or strings involved. I will teach you how to create the gimmick, and the sleight-of-hand that will allow you to perform the effect. This is the killer climax to an already very strong and visual effect.