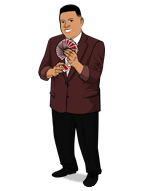 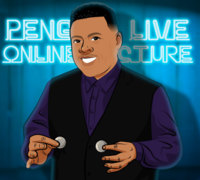 Today, when you order "Kevin Bethea LIVE", you'll instantly be emailed a Penguin Magic gift certificate. You can spend it on anything you like at Penguin, just like cash. Just complete your order as normal, and within seconds you'll get an email with your gift certificate.

"Kevin and I have been good friends for over 30 years and I've seen him work many times. He is gifted with an easygoing performance style and an exceptionally soft touch with his sleight of hand. If my life depended on having someone being astonished and blown away with close up magic, I would have NO reservations of putting my life in the hands of one Mr. Kevin Bethea." -Eric DeCamps

"Kevin is one of the busiest real workers I know. He is a full time pro, a fine technician, superb presenter of magic and a very creative guy. Kevin really thinks about his work and works very hard in crafting strong commercial magic for lay audiences. He is not satisfied to perform the typical tricks that most strolling magicians perform. Everything he does looks very different from the typical. When I need to recommend a close up magician for a gig, Kevin is my go to guy!" -Marc DeSouza

Nine Hard hitting routines that you will use and your audiences will love. Great for stand-up, close-up, corporate and restaurant work. You will learn new secrets along with insights and time tested wisdom from a pro.

Silver Serenade- Multi-phase three coin routine with productions and vanishes. One of the coins defies gravity before growing into a jumbo size silver dollar. This routine has a lot of surprises.

Triple Flurry Spellbound- A silver dollar changes to copper then to a chinese coin, before changinging back to the silver coin. Vanishes and productions are incorporated into the routine allowing the performer to end clean.

What are The Odds- A spectator randomly tosses a business card into a shuffled deck and causes it to mysteriously land on top of their selection.

Detective Kings- A fun paced crime solving sandwich routine where the detectives find their suspect by using forensics and a little bit of magic.

Wand Vanish- A complete vanish of a ball during your cup and ball routine where you can show both hands empty. There is no sleeving, no topits, no gimmicks holdouts. This fools EVERYONE.

Diamond Thieves- The four queens rise to the top of the deck, the deck turns blank, the Queens vanish, all culminating in the production of a giant diamond once owned by Cleopatra.

Mint Condition- An Okito box routine where four coins vanish one at a time and appear in a small metal box. The coins then vanish all at once from the box and appear back in the magician's hand. For the finale, the coins change into mints and are poured out onto the table.

Kevin Bethea is a full time Professional Magician with over 30 years of performing experience. His interest in magic was ignited at the young age of seven when he first saw a movie about his soon-to-be childhood idol, Harry Houdini. His dedication and love for the art of magic have evolved into a career that has made him one of the most sought after entertainers in the greater Philadelphia and Tri-State area. His silky smooth award-winning sleight of hand magic at corporate events, cruise ships, trade shows, private parties, hospitality suites, and weddings have amazed audiences from coast to coast.

Recently, he was awarded Close-Up Magician of the Year by the International Association of Black Magical Artists.

Kevin is a published magician and has been featured in a book that has been distributed in school libraries all across the country to inspire others to pursue magic as a career. Some of his original effects can also be seen in Harry Lorayne’s ApocaIypse and Stephen Hobbs - Labyrinth.

When not performing private venues Kevin can be seen performing table-side magic weekly in some of the finer restaurants in the Philadelphia/New Jersey areas.

Purchase this product and on August 30th anytime after 12:00pm Eastern, click the MyPenguinMagic area at the top of the Penguin site. You'll see the "learn" button appear next to this lecture.

Honored Report this review
Verified buyer Pro Privacy ON (login to see reviewer names) on September 1st, 2020
As Dan mentioned at the end of this lecture, thank you Kevin for sharing your magic! A lot of great magic and Kevin goes into the reasons why and why not on each routine he teaches. There are sleights you may not know, some you may know, but Kevin has ironed them all out in real world experience. It was a pleasure to learn from him.
3 of 3 magicians found this helpful.
Did this review help you? Do you want to respond to this review?

Grace is Powerful Report this review
Pro Privacy ON (login to see reviewer names) on September 1st, 2020
Kevin Bethea is a BEAST. You know how to tell if a magician has mastered his props. Those props appear to weigh nothing. Everything Kevin handles looks weightless, effortless, and graceful. It looks like magic! At a mere $3.33 per trick, you'll not find a bigger bang for the buck anywhere. The routines will require some work, however you will be amply rewarded when you do your due diligence. Be bold, and take the next step to making your magic not only deceptive, but beautiful to watch.
2 of 2 magicians found this helpful.
Did this review help you? 1 comment

definitely worth the money Report this review
Verified buyer Pro Privacy ON (login to see reviewer names) on October 4th, 2020
If you're into coin magic and ready to step ahead this lecture is definitely for you...
Kevin Bethea definitely knows his business and is a kind performer.

What I lack a little bit, is the enthusiasm other teachers put into their performances - this is just me and my opinion about my fun watching it.

Other than this it's a definite recommendation for coin guys!
Did this review help you? Do you want to respond to this review?

Love the originality Report this review
Verified buyer Pro Privacy ON (login to see reviewer names) on September 16th, 2020
This is one of those performances that makes you just shake your head in total amazement. Kevin Bethea is so smooth and polished that my first reaction to his performance was "there's no way I could pull off that sleight of hand". But after buying the video and watching it twice, Kevin makes the impossible almost easy (not to say that it won't take practice). I like the originality of the tricks and I love that he explains his thought process behind each trick and how he's evolved it over time. His audience insights alone are worth the price of the performance. Also enjoyed the format with Dan Harlan's questions and commentary mixed in.
Did this review help you? Do you want to respond to this review?

High Caliber Magic Lecture Report this review
Pro Privacy ON (login to see reviewer names) on September 13th, 2020
Wow! You won't get bored watching this lecture...fast paced visual magic from a busy working pro. Close-up magic with Coins,Cards, Balls ...and more coins.All Excellent material with the psychology and misdirection thoroughly worked out from years of performance.Kevin shows you how to get the best audience impact from each of the effects. Most of the items are FULL ROUTINES with many effects incorporated within each. There is plenty to choose from and a lot of stuff that will fool the pants off your audiences as well as other magicians. He teaches a cup and ball move that fools everyone.
Highly Recommended.
Did this review help you? Do you want to respond to this review?

Kevin Bethea live Report this review
Verified buyer Pro Privacy ON (login to see reviewer names) on September 8th, 2020
Very good material from a smooth performer. I must admit, I was not familiar with Kevin or his work. But after the teaser I just had to take a chance. I was not disappointed. I will definitely be working on some of his work and keeping an eye out for more of his material.
Did this review help you? Do you want to respond to this review?

He love to practice and perform Report this review
Verified buyer Pro Privacy ON (login to see reviewer names) on September 6th, 2020
Classic magic at its best! Sleight of hand is not easy but Kevin makes it look easy and natural. Be prepared to do a lot of work but then if you love to do something it's not work but fun. I think Kevin has had a lot of fun in life and his magic is the best.
Did this review help you? Do you want to respond to this review?
Bestsellers