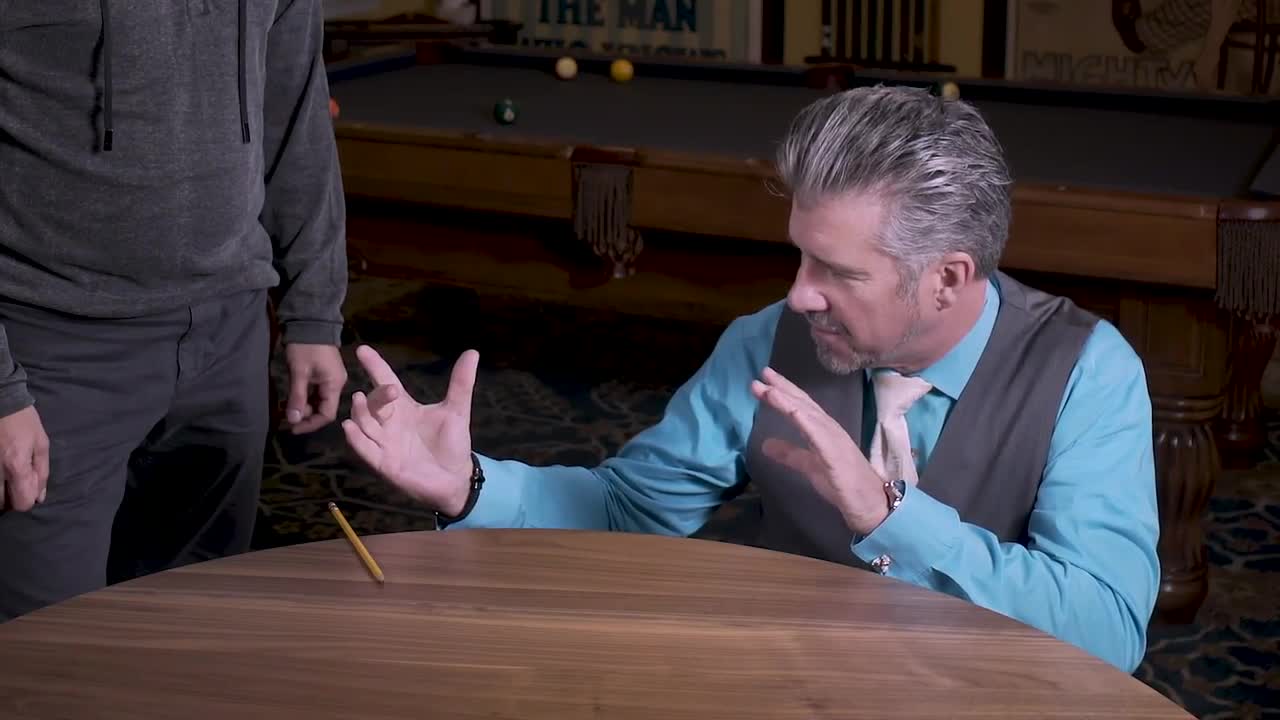 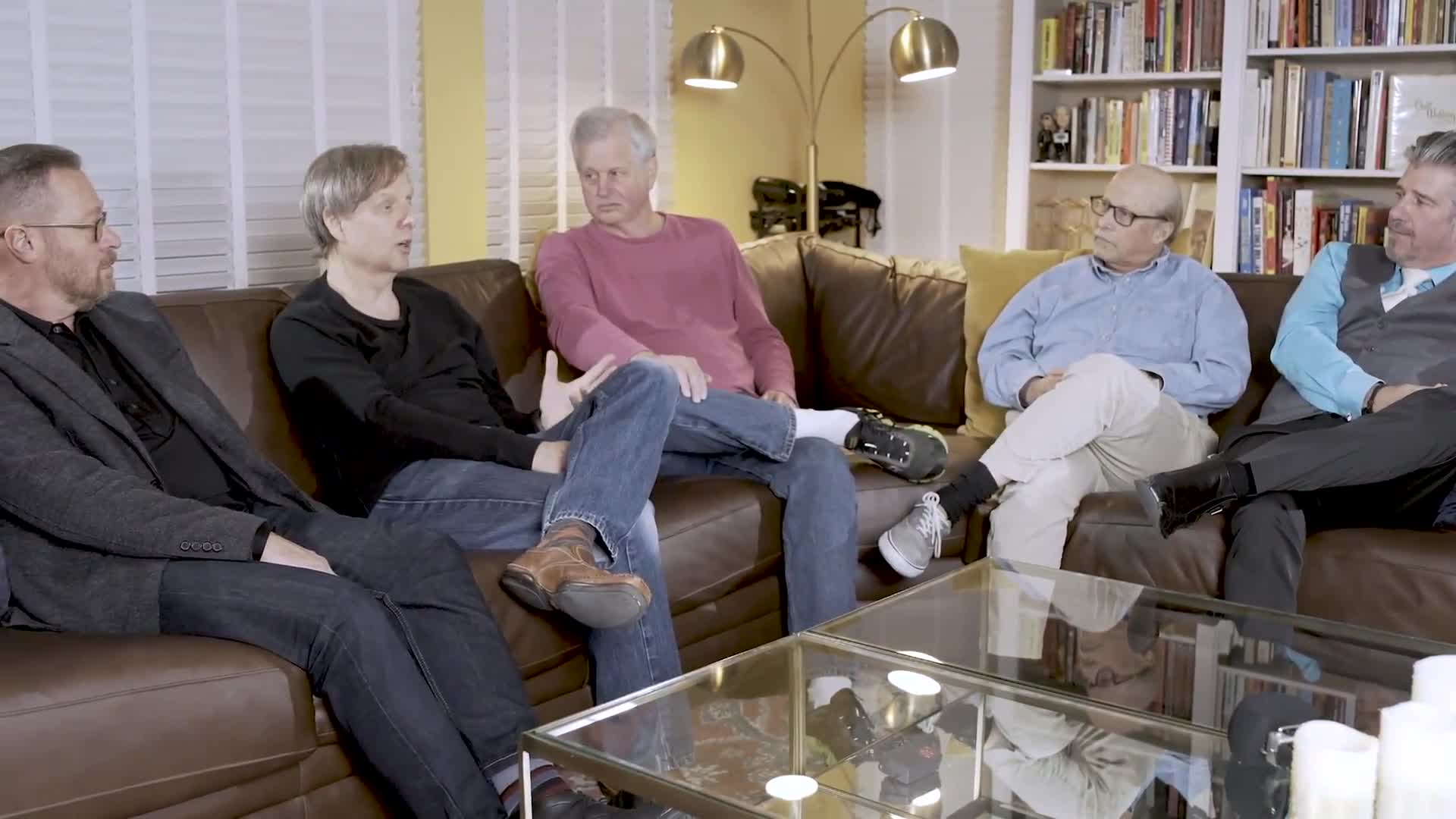 Today, when you order "Impromptu Magic Project Volume 1", you'll instantly be emailed a Penguin Magic gift certificate. You can spend it on anything you like at Penguin, just like cash. Just complete your order as normal, and within seconds you'll get an email with your gift certificate.

Four effective and easy-to-do impromptu tricks plus an hour of intimate conversation with some of the most respected names in magic. START LEARNING INSTANTLY.

You’re at a party, someone mentions you’re a magician, and the next thing you know you’re being asked to perform. Sound familiar? Vinny Grosso noticed that his professional repertoire wasn’t a perfect fit for those social settings, so he gathered some of his most knowledgeable friends to learn mind-blowing tricks that work virtually anywhere on a moment’s notice.

This is Volume one of a three-volume download, Banachek, Bill Herz, Chris Kenner, Mac King, and Mike Caveney take turns teaching Vinny their favorite impromptu effects. For each trick you’ll learn from detailed one-on-one instructions, watch real world footage of Vinny performing at a cocktail party, and polish it all off with in-depth discussions and critique from the group.

From Kenner’s Picture This to King’s Bill in Pen, the Impromptu Magic Project will get you ready to perform for friends, family, and strangers, no matter where you are (yes, even over video). Some of these tricks you won’t have seen before, while others will offer new applications and subtleties you can adapt for both impromptu settings and other kinds of magic you perform.

Volume 1 tricks:
Give Me That (Mac King) - Vanish a coin in a cloth napkin, produce the coin, then produce someone’s drink!

Vanishing Napkin (Bill Herz) - Roll a paper napkin into a ball that slowly gets smaller and smaller until it disappears.

PK Pencil 1&2 (Banachek) - Make a pencil move using only your mind, then split it in half with a borrowed bill.

Instant Psychic (Mike Caveney) - Give anyone psychic powers; you’ll leave the room while they divine a random selection.

"Impromptu effects are the sort of thing we all love to trade around and jam on at magic clubs or conventions. The style, structure and content of this project makes it feel like a jam session you would kill to get in on." - Carisa Hendrix

"Six of the best minds in magic together in one project, I shouldn't say anything else besides 'buy it now and thank me later!' It’s just f****** great!" - Bernardo Sedlacek

"This series reminds us all that the secret to the art of magic lies in the subtleties. You’ll find some simple tricks and, more importantly, the little touches to make them great. Lots to learn here." - Stan Allen

"I'm only halfway through the video and there are already a few things that are going into my permanent repertoire. I'm a big fan of impromptu magic and I was surprised to learn some great things I’ve never seen before. Every magician should watch this masterclass in impromptu magic so they're always ready when the situation arises." - Michael Mode

"First, what an amazing group. You can't go wrong when you bring Banachek, Bill Herz, Chris Kenner, Mac King, Mike Caveney and Vinny Grosso together to teach and discuss magic. The effects are great and truly impromptu, designed to perform with everyday objects rather than special props. The panel discussions include valuable tips, ideas and insights based on the group’s many years of professional experience in magic. Highly recommended!" - Jen Kramer

"This is like being a fly on the wall while some terrific (and noteworthy) magicians have a session. The result is one of the most enjoyable and useful videos one could wish for." - David Regal

"The Impromptu Magic Project would be a must-buy if it was just hearing these legends of magic give advice. The fact that they also tip the tricks that back up their philosophy (and you get to see Vinny perform the tricks in a real-world setting) means this has to be in your library if you are serious about magic" - David Corsaro

"Who gets to spend three hours with five world class magicians learning some simple, very effective tricks and discussing the finer points of presentation? There are some great insights shared that are invaluable to any magician, regardless of their level of experience. And the material is presented in such a wonderful, refreshing manner. I highly recommend this to all magicians!" - Marc DeSouza

"I love the premise of this project. Not only will you learn amazing tricks but you will learn how to do it and how NOT to do it. Vinny could have edited the tape but he didn't and that is why those tapes are valuable. Don’t miss out!" - Michel Huot

Perfect Report this review
Verified buyer Pro Privacy ON (login to see reviewer names) on September 26th, 2020
Some of the effects are older, I love how they demonstrated, taught it and then Vince tried at a dinner party. Vinnie was far from perfect and it still killed. It shows the importance of practice.
A great value in my opinion
1 of 1 magicians found this helpful.
Did this review help you? Do you want to respond to this review?

Thought it would be better Report this review
Verified buyer Pro Privacy ON (login to see reviewer names) on September 30th, 2020
Several of these tricks are old and not that exciting. I felt that for almost $20.00, I would get some fresh and new and GOOD tricks. Should have been a $9.95 cost for what was provided. These are some of the best magicians around and I thought we'd get some new tricks!
1 of 2 magicians found this helpful.
Did this review help you? Do you want to respond to this review?

Great impromtu magic Report this review
Verified buyer Pro Privacy ON (login to see reviewer names) on September 27th, 2020
5 Stars, I love it!
Hope there will be more of this.
Did this review help you? Do you want to respond to this review?

Perfect Report this review
Verified buyer Pro Privacy ON (login to see reviewer names) on September 26th, 2020
Some of the effects are older, I love how they demonstrated, taught it and then Vince tried at a dinner party. Vinnie was far from perfect and it still killed. It shows the importance of practice.
A great value in my opinion
Did this review help you? Do you want to respond to this review?
Bestsellers