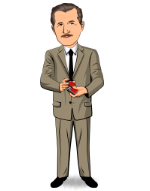 Today, when you order "Dai Vernon: A Biography", you'll instantly be emailed a Penguin Magic gift certificate. You can spend it on anything you like at Penguin, just like cash. Just complete your order as normal, and within seconds you'll get an email with your gift certificate.

The last great undiscovered artist of the 20th Century.

(1 customer reviews)
+ Add to Cart
Review Wishlist
In stock: usually ships within 24 hours!
Order in the next 5 hours 12 minutes and it will ship TODAY!
book
Tweet

Artist. Magician. Muse. Miracles flowerd from his fingertips -- effortlessly. The source of his secrets: the underbelly of gamblers and hustlers that roamed back-room dens of iniquity, jail cells and city streets of America. Vernon sought them out, befriended them and made their work his. This book traces the first half of his remarkable journey -- through Ottawa, Coney Island, Manhattan, Chicago, Havana, Kansas City, Colorado Springs. And the celebrities -- Houdini, Billy Rose and Roosevelt that Vernon encountered along the way.

This biography also details the evolution of magic in the 20th Century. From the stages of London and Paris to the backrooms of magic emporiums where secrets were bought and sold, Vernon's life and work escort the read through vaudeville, Broadway theatres, grand magic spectaculars, New York nightspots and the dawn of television. At last, the cornerstone of the craft has been unveiled for all to see.

If you are a fan Report this review
Pro Privacy ON (login to see reviewer names) on April 6th, 2010
If you are a fan of Vernon you will love this book. It is well written and will give you even more insight into the life and times of the Professor. I enjoyed this read but may be biased as a result of my admiration for Vernon. Add to cart and enjoy.
1 of 2 magicians found this helpful.
Did this review help you? Do you want to respond to this review?
Bestsellers