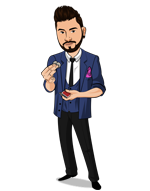 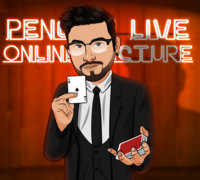 Today, when you order "Luis Carreon LIVE 2", you'll instantly be emailed a Penguin Magic gift certificate. You can spend it on anything you like at Penguin, just like cash. Just complete your order as normal, and within seconds you'll get an email with your gift certificate.

"What do you get you combine dangerous chops, dangerous good looks and a charming personality? Luis Carreon! One of the few card magicians that knows how to keep the action happening and audience enthralled from start to finish, and one of my favorite live performers." -Bill Abbott

"Simply put, Luis Carreon is one of the best magicians in the world. What sets him apart, is his ability to marry technical virtuosity with an entertaining, and often hilarious, performing persona. His magic fools audiences badly, without making fools of them. His performances are an invitation into a world where anything can happen and does! I am thrilled that he has agreed to share some of his secrets with all of us! I look forward to learning from Luis and you should too!" -Benjamin Barnes, Entertainment Director at The Chicago Magic Lounge

"The Card Magic Of Luis Carreon is Impressive Dynamic and Modern, I Love IT!" -Fenik, Mexico's premiere Magician

La rosa de el amor - This is the opening act Lui's used for over 10 years, coins appear and disappear and ends with an unexpected bottle production.

Steranko is a Matcho Man- From a shuffled deck 3 cards are match, using wonderful technique by Jim Steranko.

If I Could- A everywhere and nowhere where the full deck changes to a named card,a perfect opener for close up.

Lane 4 Aces- A quick ace production where a 4 of clubs gets split in to the 4 aces.

The Guardians of the Calaxy- The perfect collectors routine for walk around no table required.

Metal Bending Routine- This is a full 8 min metal bending act, Luis's has taken what could be done fast into a full evening act. One of the first things he device for stand up. Learn some of his own original bends and his thinking behind this act over 12 years.

CML Coin Routine- This routine has been tested in every scenario possible, coin fluries coins thru table and a fast coins across all build in one act! perfect for close up.

Mulita- If you are a fan of Roy walton's smiling mule! then this is the trick for you.

Return of the Slop Shuffle Monster - imagine how much magic you can get from just a slop shuffle, A lovely opener or the perfect closer for your card act.

Mini Rising Cards- A rising card effect with a mini deck where everything can be examine before and after, yet you are completely reset for your next table.

Magician and mentalist Luis Carreon won the Harlan Tarbell Close up Competition Award from the International Brotherhood of Magicians 2 years in a row, took home 1st place at the Chicago Magic Competition hosted by the Society of American Magicians, he travels the country teaching other magicians about the art of magic and he is the head demonstrator at Magic Inc, the oldest family-owned magic shop in the country. Carreon has performed his show Bending Minds and Bending Dreams at theaters around Chicago, has been featured on the Univision evening news, was semi-finalist on Tengo Talento, the Spanish language equivalent of America's Got Talent, he is also a regular performer at the famous Magic castle In Hollywood California.

Purchase this product and on October 25th anytime after 12:00pm Eastern, click the MyPenguinMagic area at the top of the Penguin site. You'll see the "learn" button appear next to this lecture.

Luis Carreon Live lecture 2 Report this review
Verified buyer Pro Privacy ON (login to see reviewer names) on October 26th, 2020
I think this lecture is great. There are a lot of effects and you get some ideas. Highly recomend to get this.
3 of 4 magicians found this helpful.
Did this review help you? Do you want to respond to this review?


1 of 2 magicians found this helpful.
Did this review help you? Do you want to respond to this review?

Love his thinking Report this review
Verified buyer Pro Privacy ON (login to see reviewer names) on October 27th, 2020
I love not just Luis's thinking and theory but I think he's hysterical :)
Great lecture!
1 of 3 magicians found this helpful.
Did this review help you? Do you want to respond to this review?

Favorite Penguin Lecture Report this review
Verified buyer Pro Privacy ON (login to see reviewer names) on January 18th, 2021
This lecture is packed with a variety of different types of effects for close up, stand up and stage. I really appreciate Luis`s touches that make each effect stronger without making them a lot more difficult. One of my favorite lectures.
0 of 1 magicians found this helpful.
Did this review help you? Do you want to respond to this review?

Is he a man or a beast? Report this review
Verified buyer Pro Privacy ON (login to see reviewer names) on January 11th, 2021
Luis is a beast!
0 of 1 magicians found this helpful.
Did this review help you? Do you want to respond to this review?

Top Report this review
Pro Privacy ON (login to see reviewer names) on November 27th, 2020
Beautiful powerful magic. Just loved the first lecture. For me Luis is a perfect magician in the modern magic
0 of 1 magicians found this helpful.
Did this review help you? Do you want to respond to this review?
Bestsellers