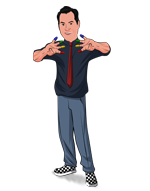 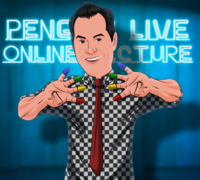 Today, when you order "Farrell Dillon LIVE", you'll instantly be emailed a Penguin Magic gift certificate. You can spend it on anything you like at Penguin, just like cash. Just complete your order as normal, and within seconds you'll get an email with your gift certificate.

"Everything Farrell Dillon performs in his act has a heart! He consistently takes deep dives into the history of an effect to find the perfect method, solid framework and nuanced subtleties, that make his performances completely entertaining. His ardent respect for the craft and art of magic makes each piece resonate with an audience, producing not only consistent laughter, but pure reality-shattering amazement!"- Scott Alexander

"Farrell Dillion combines solid sleight of hand with outrageously funny comedy.  He has a very strong footing in both worlds.  I am very much looking forward to hearing what he has to say" - Kevin James

The Lesson- Two of stand up Magic’s strongest tricks combined into a powerhouse.

Signed Bill to Signed Card- A signed bill ends up inside a signed playing card.

Farrell Dillon has been on 6 seasons of Masters of Illusion, he has been a
headliner on the Las Vegas Strip, he regularly performs in the countries largest
Performing arts Centers, He has performed on all the major cruise lines, and has
been nominated for Stage Magician of the Year by the Magic Castle.

Purchase this product and on February 28th anytime after 12:00pm Eastern, click the MyPenguinMagic area at the top of the Penguin site. You'll see the "learn" button appear next to this lecture.

Farrell Dillon Rocks Report this review
Verified buyer Pro Privacy ON (login to see reviewer names) on March 2nd, 2021
This was my favorite lecture ever, Farrell is fantastic.
Thank you so much Farrell for releasing some very wonderful Magic. I was so thrilled to see your Penguin Live Lecture.
If you perform or plan to perform on Stage this is the lecture for you, however every Magician will learn so much from this lecture, Close-up, Parlor, Stage.
Do yourself a favor, get this lecture, it will make your Magic better.
1 of 1 magicians found this helpful.
Did this review help you? Do you want to respond to this review?

Awesome in so many ways Report this review
Verified buyer Pro Privacy ON (login to see reviewer names) on March 1st, 2021
I was wondering if I would ever see Farrell lecture. He did a great job teaching some great magic and manipulation that proves you don't need to do a manip routine silently to music. He puts so much effort into every detail of his effects and show. Well done and worth waiting for. This lecture has something for everyone in it. Great Job Farrell and Penguin.
1 of 1 magicians found this helpful.
Did this review help you? Do you want to respond to this review?

Great lecture Report this review
Verified buyer Pro Privacy ON (login to see reviewer names) on June 22nd, 2021
I learned a lot of things in this lecture, especially if you interested in manipulations, Farrell Dillon is such a great teacher
Did this review help you? Do you want to respond to this review?

Loved this. Report this review
Verified buyer Pro Privacy ON (login to see reviewer names) on June 1st, 2021
This was super inspiring. It was awesome to see what stand-up material looks like from a top guy in the industry.

I got great tips on card manip and table setups. Excellent lecture. Definitely not easy stuff.
Did this review help you? Do you want to respond to this review?

Farrel Dillon Report this review
Verified buyer Pro Privacy ON (login to see reviewer names) on April 18th, 2021
I've bought a few of your lectures and all but one met my expectations, however, the Farrell Dillon lecture was a "Home Run" as far as I am concerned. The effects he performed and explained were all classics. I mainly do parlor magic, and Farrell did an outstanding job of explaining every detail, from setting up, performing, and additional tips. His silk to lemon/bill to lemon combo was worth the price of the video. If your looking for some strong stage magic, this is the one to get!
Did this review help you? Do you want to respond to this review?

Just get this! Report this review
Verified buyer Pro Privacy ON (login to see reviewer names) on March 9th, 2021
What a great video! His take on the Salt Pour is worth the price of the lecture. He's a good performer, a great teacher, and I thoroughly enjoyed this lecture. Add it to your cart. You won't be sorry.
Did this review help you? Do you want to respond to this review?

Fantastic and a must watch! Report this review
Verified buyer Pro Privacy ON (login to see reviewer names) on March 8th, 2021
Farrell's lecture is fantastic and is a must watch. He is extremely talented with some great real world material.
Did this review help you? Do you want to respond to this review?

One of the BEST! Report this review
Verified buyer Pro Privacy ON (login to see reviewer names) on March 8th, 2021
Wow! This is some WONDERFUL material!

Doing a performance/lecture without a live audience feels like a rehearsal but in the words of Dan Harlan during Farrell Dillon's lecture, it looks like a "beautiful rehearsal"!
Live audience or not, Farrell's material WORKS!

I have had the pleasure of seeing him perform from a large college campus auditorium to a headline performance with THIS material on the Vegas Strip - The Jubilee theater at Bally's. He absolutely destroys with it every time!

He is one of my favorite comedy magicians and when I found out he had a Penguin Live, I clicked Add To Cart right away!

If you want to learn some amazing and highly entertaining audience foolers that play anywhere from a small room to a large theater, this is the lecture to watch now!

Farrell's material is designed not only to entertain and make audiences laugh but to also BLOW MINDS, as (he explains) a magician should do.

Don't hesitate!
Did this review help you? Do you want to respond to this review?

Farrell Dillon Report this review
Verified buyer Pro Privacy ON (login to see reviewer names) on March 6th, 2021
Very good show. I learned a lot in terms of routines and presentations. It is nice to have sometimes sleights of hands.
0 of 1 magicians found this helpful.
Did this review help you? Do you want to respond to this review?
Bestsellers