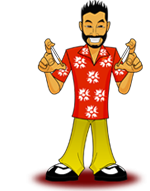 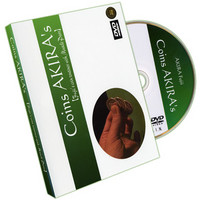 Today, when you order "Coins Akiras by Akira Fujii", you'll instantly be emailed a Penguin Magic gift certificate. You can spend it on anything you like at Penguin, just like cash. Just complete your order as normal, and within seconds you'll get an email with your gift certificate.

In 1993, Akira Fujii's lecture notes were released in Japan. At that time, the Muscle Pass was transformed from an acrobatic stunt to an element of real magic.

In 1996, Coins Akira's was developed as a routine that did not use gimmicked coins.

In 2002, rumors spread to foreign countries and 'Jet Coin' was published in Genii Magazine.

Now this routine - and others - are explained on DVD!

Flash Back: Four coins concealed with cards (in a Matrix set-up) . Coins gathers in one place, and immediately return to their starting positions!

Jet Coin: Three coins pass from one hand to the other. This is NOT your standard Coins Across!

Grow Up Coin: One coin disappears and reappears, then expands visibly - twice!

Three Ahead: Three coins thrown in the hand disappear. You have to see the work on this one to believe it!

Incredible Report this review
Pro Privacy ON (login to see reviewer names) on April 10th, 2010
Let's get this out of the way first. This dvd is for advanced skill level and higher. This coin material is exceptionally hard. This is the very reason I bought this dvd. Once you have it down though it looks amazing.
This material uses the muscle pass quite a bit. It assumes you can already do it very well. I used The Muscle Pass dvd by Jay Noblezada to learn it. If you have it down though this is the dvd you want. Amazing material here. If you are an experience coin worker this should be in your collection
1 of 1 magicians found this helpful.
Did this review help you? Do you want to respond to this review?
Bestsellers