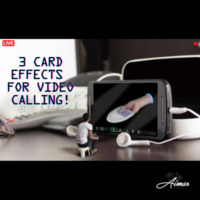 Today, when you order "3 Card Effects in Videocall by Aimar Garcia Attis", you'll instantly be emailed a Penguin Magic gift certificate. You can spend it on anything you like at Penguin, just like cash. Just complete your order as normal, and within seconds you'll get an email with your gift certificate.

This pack includes this 3 effects can you do it for fun or in your online shows .

-The Good and Bad Intuition

-Though Card in their Hands

The spectator shuffles the cards and deals 5 cards to 3 players, selects a pack and remembers a card, mixes the pack again and loses it among the other 2 packs, now with those same cards he deals cards for 5 players and takes a pack at random one by one until he sees his thought card , now he deals 3 cards from the pack he selected and mixes them on the table and the magician knows which is his card.

The classic assembly of aces that happens in the package that the spectator selects.
Four aces are put face down and 3 cards on top of each one, the spectator decides how to recompose the 4 packs with each ace, cuts and complete the packet and mixes the aces again by dealing 4 cards on the table, the spectator eliminate 3 piles and put his hand
in the only one left, take the remaining packages one by one and turnover ,the aces are not there, the spectator raises his hand and now the aces they are under the package of his hand.