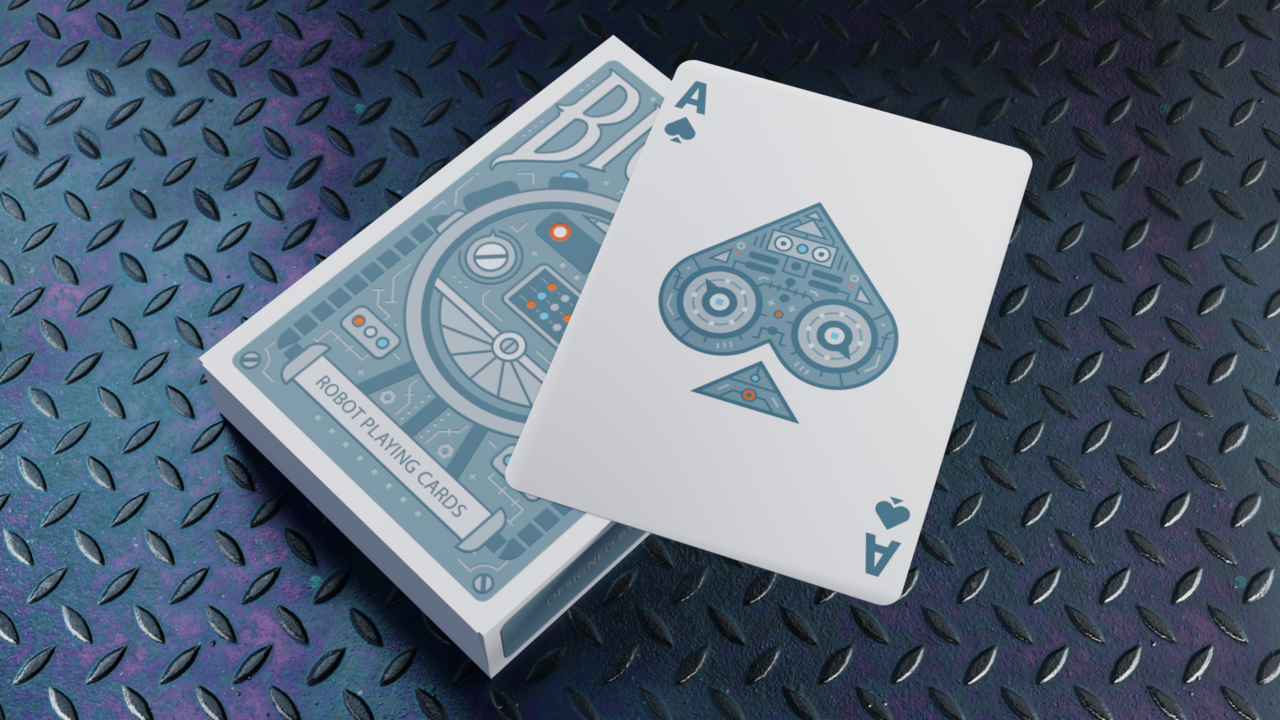 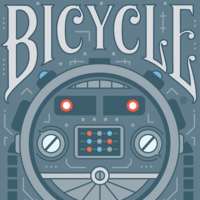 Today, when you order "Bicycle Robot Playing Cards", you'll instantly be emailed a Penguin Magic gift certificate. You can spend it on anything you like at Penguin, just like cash. Just complete your order as normal, and within seconds you'll get an email with your gift certificate.

A 100% custom deck limited to 2,200 featuring a variety of fun robots. Great for games AND magic. ORDER TODAY AND GET FREE SHIPPING

The Bicycle Robot deck is a 100% custom deck of playing cards featuring a variety of fun, futuristic-style robots on the back design and faces. This is a fantastic deck for games, and it opens up a world of presentational possibilities for magic routines.

Printed in the USA on traditionally-cut Classic stock with embossed Magic finish by the United States Playing Card Company, Bicycle Robot playing cards are printed using vegetable-based inks and starch-based laminates on FSC-certified paper sourced from sustainable forests. This means the cards not only shuffle, fan, and spread perfectly for all of your favorite games & tricks, they're made with the environment in mind!

Bicycle Robot Report this review
Verified buyer Pro Privacy ON (login to see reviewer names) on March 5th, 2021
A nice deck. I boycott Facebook.
2 of 2 magicians found this helpful.
Did this review help you? Do you want to respond to this review?

Futuristic human-like machines Report this review
Verified buyer Pro Privacy ON (login to see reviewer names) on March 23rd, 2021
Bicycle Robot Playing Cards is another charming novelty deck that is fully custom. The artwork on the tuck box immediately invites us to enter into its futuristic theme, and join a world of technology that is inhabited by computers and robots.

The card backs have a rather complex design, that fortunately isn't burdened with the addition of too many colours, so it works well. The graphics bring to mind the idea of a circuit board, which has been carefully screwed onto the card backs with eight well-placed tiny screws. Against this soft grey-blue backdrop are various components, with robot-like features.

The court cards continue a somewhat minimalist approach to the colours, which is a wise choice given the many details on the actual designs of the characters. As you'd expected, each of these represents a different kind of robot, depicted somewhat according to the cliched popular view of a human-like machine, complete with head and hands. The King and Queen characters are given crowns that emphasize their royal standing.

I really appreciate the custom pips that adorn this deck, especially on the number cards. They're very large, which means that they can incorporate more details than usual. This has been used to good effect, with looking somewhat like the inside of a machine, and containing a small system of cogs and gears. Gun metal greys and blues work well for the artwork here, because it helps the crisp blue of the robot eyes stand out, as well as the vibrant orange red of the pips used for the Hearts and Diamonds.

The deck is finished off with a couple of robot Jokers, where the human-like features of the court cards have been abandoned in favour of a more fully machine look. The robot theme will appeal to most people, and some magicians will appreciate the possibility of integrating this with card tricks that have a presentation closely linked to this theme. Two gaffs cards are also included.
1 of 1 magicians found this helpful.
Did this review help you? Do you want to respond to this review?
Bestsellers