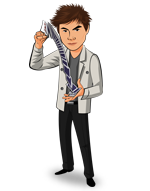 Today, when you order "EVOLUSHIN MAGIC SET (ENGLISH) by Shin Lim", you'll instantly be emailed a Penguin Magic gift certificate. You can spend it on anything you like at Penguin, just like cash. Just complete your order as normal, and within seconds you'll get an email with your gift certificate.

The EVOLUSHIN Magic kit by Shin Lim is the most innovative and exciting Magic Kit on the market!

Most magic kits put focus on the "toys" in the kit and not the person performing them. Shin Lim has developed a magic kit focused on the beginner, which makes YOU the star of the show!

EVERYTHING IS EASY TO LEARN AND PERFORM!

You will receive all the SECRET TOOLS and SPECIAL APPARATUS to perform AMAZING MAGIC!

PLUS, MUCH, MUCH MORE!

TEACHING:
All the teaching is taught by SHIN LIM! This is just like getting a one on one private lesson from one of the world's greatest magicians. Shin goes over all details of each trick so you will not only know the SECRETS but how to preform them properly.

BONUS! Shin Lim will be teaching 2 close-up acts! This way you will have plenty of magic to perform and will be able to create your own versions of these great tricks!

Better than I expected Report this review
Verified buyer Pro Privacy ON (login to see reviewer names) on February 4th, 2021
As someone who is new to magic, I have bought a couple of "magic sets" and each time was thoroughly disappointed. I was hesitant to purchase this kit, but I was curious because Shin Lim has his name on it, and was wondering if he was making a money grab, no matter what effect it had on his reputation. I could not have been more wrong.

I was first impressed with how it was packaged. Everything is laid out nice and neat, and the design on everything looks nice.

There is a 32 page booklet that contains 100 card tricks. I have not read through it all, but included in the tricks are descriptions of certain slights and forces. I will read it thoroughly later. I noticed there are very short descriptions for the tricks, in fact there are multiple tricks on most pages.

The accompanying video link was very good. Outstanding video and audio quality, and the angles were good as well. For the majority of it, Shin is demonstrating the tricks and his wife (who is not a magician) is learning it as he teaches. He has a very easy to understand way of teaching the tricks, always with additional information or references to other source material on the subject. The video runs 2 hours and 22 minutes and focuses on everything contained in the box excluding the card trick manual.

There are a few things some may think of as "cons". The biggest is the fact that the cards are bridge sized cards, so they are narrower than a poker deck. However for beginner magicians or kids, these will probably be a lot easier to handle. I know I find them easier to do some things with.

Second, there is not a full standard deck included. You get a gimmick deck and about 5 packet decks for different tricks. A full standard deck to perform the tricks in the manual would have been nice. I just kind of think it would look weird to be using these, then all of a sudden, red bicycles. But that is just me.

As far as the "pros" go, there is a lot. I've paid $10 for a packet trick in the past, and the 5 packet tricks included I like very much, and to me, are worth the price of the set alone. Everything appears to be of decent quality. Even the card stock is very nice.

The age range on the box says 8 - adult, and although there are a lot of things a child 8 or 9 can do fairly easily, there are a lot of tricks I look at geared more towards an older teen or adult. In fact, not 20 minutes into the video Shin shows a palm that, though amazing, is a bit advanced. Like a lot of magic, some of the tricks and gimmicks included will require a bit of practice before you would be ready to perform them.

If you are a beginner, no matter the age, I do not think you will be disappointed in the $50 investment. I seriously was thinking it was going to be another one of those "maybe I can get one or two decent tricks out of it" magic sets, but there are at least 8 of the provided tricks I plan to incorporate, and I haven't even really delved into the card trick manual yet!

I far exceeded my expectations.


5 of 6 magicians found this helpful.
Did this review help you? Do you want to respond to this review?

The ideal magic kit for beginners, packed with gimmicks and teaching from Shin Lim Report this review
Pro Privacy ON (login to see reviewer names) on March 28th, 2021
Initially you should ignore the printed book of instructions that comes with the set, which promise 100 card tricks. It's sketchy and not covered by the videos or anything else in the kit. But what you get is over 2 hours of only video instruction from Shin Lim himself, teaching you how to use the 15 excellent gimmicks included.

1. CONTEMPORARY RATHER THAN OLD FASHIONED: Instead of traditional magic props like a wand, ball and vase, and the classic cups and balls, it focuses on street magic style tricks often seen in TV specials, like a levitating bill, a self-folding bill, blank papers turning into bills, an instant vanishing device, a coin vanish using a Tic Tac style box, a Card Box Vanish, and the anti-gravity bottle trick.

2. GIMMICKS RATHER THAN STANDARD CARDS: Everything relies on the gimmicked props that you get, and tricks with a standard deck aren't really covered on the video instruction or the items included.

3. TOOLS RATHER THAN TOYS: Shin Lim makes this point very deliberately and often, that the things included aren't flashy items that draw attention to themselves, but are intended to be tools with multiple uses.

4. EASY-TO-PERFORM RATHER THAN DIFFICULT SLEIGHT-OF-HAND: Unlike a lot of other magic videos I've seen for beginners, the focus isn't on teaching sleight of hand with a deck of cards, because the aim is to get people performing magic without worrying about complex moves - very little sleight of hand is taught.

5. TECHNIQUES RATHER THAN ONLY TRICKS: Besides the tricks, he does teach some some techniques like dribbling cards, a Criss Cross Force, the French Drop, and a few more.

6. PRINCIPLES RATHER THAN ONLY GIMMICKS: Shin Lin covers a lot of general magical principles in the process of teaching the different tricks covered on the video, such as misdirection, equivoque, and multiple outs.

7. AN EXPERT TEACHER RATHER THAN AN AVERAGE AMATEUR: You get good teaching from Shin Lim himself, which is a far cry from the very average youtube tutorials commonly relied upon by many youngsters today.

8. STRONG MAGIC RATHER THAN MEDIOCRE MATERIAL: This is a carefully curated set that includes really good material, because all the tricks are strong, and are ones you'll want to do.

9. PROVEN CONTENT RATHER THAN PASSING FADS: What you get in this kit are only familiar gimmicks that are tried and true props, and even the packet tricks are mostly familiar items, e.g. a B'Wave style effect, an Ultimate 3 Card Monte effect, and something reminiscent of Nick Trost's 8 Card Brainwave.

10. HONESTY RATHER THAN HYPE: Some magic products claim that every trick is "super strong", guaranteed to "slay people", all while being "easy to perform"; this doesn't give false expectations, and Shin himself is very honest and down-to-earth.

11. VARIETY RATHER THAN OVERLAP: There's very little sense of duplication or overlap between the different items that are included.

12. VALUE RATHER THAN LUXURY: For the price, you get a stunning array of different gimmicks and tools, and while they're not the top-of-the-line quality, you do get a very solid collection of goodies to play with, without requiring you to spend a fortune.

Shin Lim's EVOLUSHIN Magic Kit gives children and beginners a real chance to develop their abilities in magic, and to get a taste of what it's like to entertain people by doing amazing things. Even people who have been in magic for a while will want to snap up this set due to the great value of all the gimmicks it includes, and the many solid tricks you can do with these.
4 of 5 magicians found this helpful.
Did this review help you? Do you want to respond to this review?

I loved this magic Set. Report this review
Verified buyer Pro Privacy ON (login to see reviewer names) on February 11th, 2021
Everyone in there live have at least bought a magic set and thought that it was so bad. This is the oppistie. If you have a kid and are just got into magic this is the magic set for you. It also has something for everyone.
2 of 3 magicians found this helpful.
Did this review help you? Do you want to respond to this review?
Bestsellers