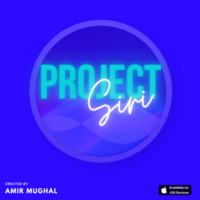 Today, when you order "THE SIRI PROJECT! by Amir Mughal", you'll instantly be emailed a Penguin Magic gift certificate. You can spend it on anything you like at Penguin, just like cash. Just complete your order as normal, and within seconds you'll get an email with your gift certificate.

Learn to perform incredible effects with SIRI and immediately add them to your repertoire.

"This SIRI Project is quite playful. It’s got a very fun element to it. Interesting how you can use the virtual assistant to perform something in the real world. It has got a very modern feel to it because it uses SIRI. It’s a clever application."
-Nique Tan Chats


"It is really clever because its customizable and very modern updated way of using iPhone in Magic. I think this Is great for anyone who’s doing like close up, walk around & even parlor! perfect for them."
-Fiddlin Jonny


"Its a really great piece of magic that you can roll into your own act. You can use these principles to do some pretty clever things. Really cool ideas, I really like them!"
-Michael O'Brien

"SWISS ARMY KNIFE FOR MAGICIANS!!
I really like this wonderful concept, the whole Siri Project gives many possibilities and you can customize it, its a great tool for closeup and stage."
-Shahul Breaker

EFFECT # 01 - CELEBRITY PREDICTION
You handover cards with celebrities' names written on it to the spectator. Spectator then generates a random number with SIRI. Spectator has free choice on whether to select this random number or to generate a new random number.

And when the spectator turns over the card they stopped at, it matches the prediction lying in front of them the whole time.

Spectator does all the work. They hold the phone, generate the numbers, and deal down the cards. You do not need to touch the phone or the cards!

EFFECT # 02 - BOOK TEST
Cards with different words written on them are given to the spectator. Spectator then deals down the cards one by one onto the table and they can stop at any card they want (free choice).

Spectator then finds the corresponding word in the book on the numbers generated by them.

Whatever WORD spectator locate in the book, it matches perfectly with the word written on the card they stopped at earlier.

EFFECT # 03 - CARD MATCH
Spectator freely chooses a playing card. You then ask SIRI to generate a random playing card. When the spectator’s chosen card is flipped over, it matches with the random card shown by the SIRI.

EFFECT # 04 - CARD AT RANDOM NUMBER
Spectator generates a random number with SIRI. They can even change the number multiple times. The card at their chosen number perfectly matches with the prediction.

⦿ Works for IOS Devices only.
⦿ Effects can be customized.
⦿ Easy to perform.

NO APP NEEDED Report this review
Verified buyer Pro Privacy ON (login to see reviewer names) on August 10th, 2021
Hi guys,
I just purchased this today and still learning. If you are familiar with iPhone, Siri, and technology, you will have a basic idea of how this works. However, I will not mention how it works here. What I would like to say is this project took a creator a lot of time to create 1 routine and you get a steal deal. Why not choosing right? I love iPhone, Siri, and technology. That’s why I choose this. You can do anything not just some given ideas, it’s customisable.
Did this review help you? Do you want to respond to this review?

Swish knife for magicians Report this review
Pro Privacy ON (login to see reviewer names) on August 3rd, 2021
I really like his wonderful concept, the whole siri project gives many possibilities and you can customise it , and great tool for closeup and stage …
Did this review help you? Do you want to respond to this review?

Genius! Report this review
Pro Privacy ON (login to see reviewer names) on July 21st, 2021
I received this as a gift, and i’am very happy with it.

So simply and clever! 👏👏👏
Did this review help you? Do you want to respond to this review?
Bestsellers