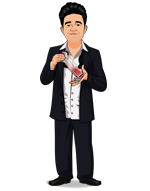 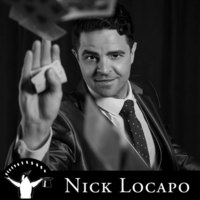 Today, when you order "Nick Locapo: Sinister Svengali, Wednesdays 5p (PST) / 8p (EST), Oct 6 - Oct 27, 2021", you'll instantly be emailed a Penguin Magic gift certificate. You can spend it on anything you like at Penguin, just like cash. Just complete your order as normal, and within seconds you'll get an email with your gift certificate.

Join Nick Locapo for a deep dive into the most powerful trick deck in the world. The Svengali Deck. You will learn everything from basic moves & routines, to new ideas and techniques that have never been seen before.

You will learn a brief history behind the svengali deck, and get an overview of how the deck works. Then you will learn the complete toolbox of moves you'll need. Riffle shuffles, overhand shuffles, run shuffles. Indifferent card spread displays, both in the hands and on the table. Instant double lifts, cuts, and forces. And finally you will learn the basics behind a little known technique, that will change your svengali work forever.

You will learn Nick's approach to the classic "Svengali" style plot, and his go-to routine a Svengali Deck. It's powerful, modular, and It uses every strength the Svengali deck has to offer. Transpositions, color changes, spelling tricks, ambitious card, vanishes, and various other reveals. The pieces in this routine are interchangeable, so using Nick's svengali blueprint, you can move them around to even create your own routine. Along the way you will learn the minor details that make a big difference, and which tricks are Nick's favorite to do. In addition, Nick will show you how you can take this routine and convert it into a "Svengali Pitch" routine, so that you can sell the decks at your shows.

This routine was born after Nick was asked by the producers at "Penn & Tellers Fool Us" to audition as a guest on the show. The challenge was to create a svengali deck routine powerful enough to fool them. "Stabbing Penn & Teller" employs a variety of Nick's favorite exotic svengali ideas, that you will learn. The first few phases of this routine use special techniques to hide the svengali deck in plain sight. You'll start by performing several "regular deck" card tricks. These tricks build dramatically, layer together, and set up the final phase where you get to perform an impossible card stab that can only be done with a svengali deck. This routine has seen high praise from some of the top names in magic, and was a highlight of Nick's lecture on the Penguin MAXX tour.

Finding a selected card, at a number named by the spectator is one of the most popular plots in all of card magic. There are countless methods published to accomplish it, however performing this routine with a svengali deck is arguably the most deceptive and fair way to do it. You will learn Nick's multi-phase, card at number showpiece, that has been crafted over thousands of performances. This routine is dangerously easy to perform, and very powerful.

Nick Locapo has been teaching magic for over 10 years, and is obsessed with the svengali deck. He has trusted the it every style venue imaginable, from simple tricks at the bar, to the parlor at the Magic Castle. If you have ever seen him do trick at a magic convention, it was probably with a svengali deck.

It is mandatory that all students have a working video camera and leave it on for the duration of each class.

These sessions are not to be recorded. Please do not use Zoom’s recording feature, or third-party recording software to store these classes for later viewing.

Registration can be cancelled or changed until 5 days prior to the class start date. If you are purchasing classes as a gift, it is your responsibility to inform us of the recipient’s name during checkout or by emailing support@penguinmagic.com. Late cancellations, transfers, name changes cannot be accommodated after the cancellation/change cutoff date.

Great Class Report this review
Verified buyer Pro Privacy ON (login to see reviewer names) on October 27th, 2021
This is the first Penguin School I have attended. It was great Nick gave us lots of great information and showed us some great handlings of the svengali deck. He always gave us a video the following day to recap the class. This was a great help to have as we worked on the things we learned. You can take notes but seeing the moves and routines is better. Thank you Nick for teaching us a great class.
Did this review help you? Do you want to respond to this review?

Wonderful series! Report this review
Verified buyer Pro Privacy ON (login to see reviewer names) on October 13th, 2021
Nick showed a routine in the second lecture that was worth the price of the series. It would destroy anyone who didn't know you were using a Svengali.

And we have two more lectures to go!

Thanks, Nick.
Did this review help you? Do you want to respond to this review?
Bestsellers