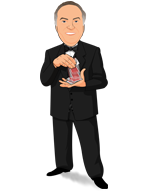 Today, when you order "In The Trenches with Paul Green", you'll instantly be emailed a Penguin Magic gift certificate. You can spend it on anything you like at Penguin, just like cash. Just complete your order as normal, and within seconds you'll get an email with your gift certificate.

Paul Green performs the kind of magic that audiences love, and that you'll love performing. Paul was named "Lecturer of the Year" at the world famous Magic Castle in 2002 and additionally has been nominated by his peers at "The Castle" for Close Up Magician of the year two times. With years of experience and thousands of performances under his belt, Paul Green's magic is practical, powerful and memorable.

In The Trenches contains:

Great DVD Report this review
Verified buyer Pro Privacy ON (login to see reviewer names) on December 9th, 2011
The DVD is definitely worth it for the Jeopardy effect!
But the other tricks are kinda bad and not that strong and some of them even cant be done without a special gimmick.
Did this review help you? Do you want to respond to this review?

amazing Report this review
Pro Privacy ON (login to see reviewer names) on April 4th, 2010
this is a great DVD! period. jeopardy is worth the price alone. it is commerical and one of my most requested trick. the other tricks are great too. paul is a great teacher and a great performer. he has an ability to entertain his audience through magic and personality which transcends the dvd. add to cart!
Did this review help you? Do you want to respond to this review?

If you get it, get it for Jeopardy Report this review
Pro Privacy ON (login to see reviewer names) on April 7th, 2010
I got this as a bonus item from penguin. The dvd explains Mr. Green's act with which, honestly, I didn't think it was that strong. I recently saw the act in the Magic Castle and I don't think it had a great impact in the audience. The best trick, in my opinion is Jeopardy. The material is not original and better versions of most tricks can be found elsewhere (books and dvds)better executed. It is not bad magic but I think you could spend your money better.
0 of 1 magicians found this helpful.
Did this review help you? Do you want to respond to this review?
Bestsellers