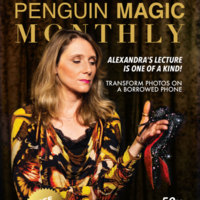 Today, when you order "Penguin Magic Monthly: October 2022", you'll instantly be emailed a Penguin Magic gift certificate. You can spend it on anything you like at Penguin, just like cash. Just complete your order as normal, and within seconds you'll get an email with your gift certificate.

The 52-on-1 issue! Change photos on a borrowed phone, shrink signed cards, and predict the impossible, with top card pros like Ryan Schlutz, Dean Dill, and Jon Armstrong.

Learn the most exciting, entertaining, and innovative routines you've ever seen with a 52-on-1 card. Make impossible predictions, shrink a deck of cards, and change the photos on a spectator's phone. You can do all of this and more as soon as you pick up this copy of Penguin Magic Monthly and the included Bicycle gaffed playing card. Pick it up for free during the month of October with every physical order at Penguin Magic over $50.

Here's a taste of what you learn this month:

George Schindler created perhaps the most popular routine in the world using the 52-on-1 card. You can learn his original routine exactly as he first marketed it so many years ago. This is the routine that made the 50-on-1 a bonafide classic. This routine is still used by thousands of professionals every day all over the world.

Blow up and shrink a deck of cards at will with Steve Beam's innovative ideas. All 52 cards visually shrink to fit on a single playing card you can carry in your wallet! That same card can be expanded to create an entire, full-sized, deck of cards.

IN CASE OF EMERGENCY
by Dean Dill

One of the cleanest card predictions you'll ever see from a legend in close-up magic. Place a card face down on the table, they freely name a card, and that's the card on the table. This application of the 52-on-1 card is a hardcore fooler.

SIGNED AND SHRUNKEN
by Jon Armstrong

Shrink a signed playing card, then return it to its original size. This is a go-to routine from one of the world's greatest close-up magicians.

Change a photo on a spectator's phone. It's like a piece of James Bond technology in real life, and it could already be on your phone! This one principle has thousands of mind bending applications.

Alexandra Duvivier also joins us in the studio, directly following her appearance at the world championship of magic. She teaches some of her pet routines from her Parisian magic show on her Penguin Live lecture. Read all about her lecture in this issue of Penguin Magic Monthly.

Usefull tips n bits Report this review
Verified buyer Pro Privacy ON (login to see reviewer names) on November 19th, 2022
Good book has some usefull information.
Did this review help you? Do you want to respond to this review?

Loved it Report this review
Verified buyer Pro Privacy ON (login to see reviewer names) on November 4th, 2022
Great issue with a bonus 52-1 card included. Multiple routines and handlings that leave wonderful reactions. Solid issue
Did this review help you? Do you want to respond to this review?
Bestsellers