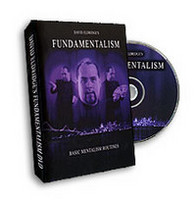 Today, when you order "Fundamentalism by David Eldridge", you'll instantly be emailed a Penguin Magic gift certificate. You can spend it on anything you like at Penguin, just like cash. Just complete your order as normal, and within seconds you'll get an email with your gift certificate.

The complete mentalism show of David Eldridge all on one DVD.

Fundamentalism, the complete mentalism show of David Eldridge all on one DVD. All the classics are here, including some you've probably never heard about. The props fit nicely in your pockets and the routines can be performed just about anywhere.

Going to take some work before you can use it all Report this review
Pro Privacy ON (login to see reviewer names) on April 2nd, 2010
As long as you can keep in mind you're not seeing Max Maven in action here, you'll probably enjoy the simple effects available. Some of the mentalism offered is straightforward and plays well to a small group or even two individuals. The "ESP with Playing Cards" routine plays well for a layman audience, but it won't fool anyone with even a beginner's experience in magic until you get to the sandwich effect at the end. That pays off well, I'll admit.

"Flip Flop" is so complicated it almost confuses the spectator in the video. The "Hoy Book Test" and "Pick-A-Date" are old routines that are probably on several other videos out there (Ross Johnson's "Simply Psychic" has a better version of the book test that involves describing entire paragraphs rather than a single word, and the video costs half the price). To be fair, David's method does allow a certain impromptu handling if you're at a party and you know someone is going to ask you to do some magic for them.

"Grey Elephants in Denmark" really blew the audience away...in 1995 when Max Maven did it on "World's Greatest Magic". Unfortunately, since then it's been so over-used you can't even consider trying it any more. My 13 year old son came home from school trying to pull it on me because his friends had taught it to him. You might fool a few folks with it, but it's a risk.

"Jumbo 8 Card Brainwave" is probably one of the best effects on the video. It can be adapted for regular Poker size cards if you don't want to play it big for stage. His handling is good on it and for the effect it doesn't take much practice (one move is all you have to learn). He also does a couple of routines using ESP cards that you might consider. It should be mentioned that they can be adapted for use with regular playing cards if you tweak them a little. That would allow you to throw in a little mentalism in the middle of your card routine if you wanted to.

So all totaled we have one killer routine, two fairly good ones, two that can be tweaked to be useful, and four that probably shouldn't have been used. If you're just getting into mentalism, you might consider this, but if you have any experience with it you can skip it.
15 of 17 magicians found this helpful.
Did this review help you? Do you want to respond to this review?

Give me a break! Report this review
Pro Privacy ON (login to see reviewer names) on December 5th, 2008
Have you seen this guy perform? If not, "believe me" you aren't missing a thing! For starters, he sounds like he has a serious head cold/ is stuffed up. Nasally (did I spell that right) is how he sounded, and irritated is how I felt listening to him. In my opinion, a serious Max Raven wanna-be! You have been warned. Penguin, do us all a favor and pull from the shelf immediately. In addition, a "total recall" for any purchased wouldn't be a bad idea either!
10 of 11 magicians found this helpful.
Did this review help you? 3 comments

Little too basic Report this review
Pro Privacy ON (login to see reviewer names) on May 3rd, 2008
For the price, I didn't feel like any of the "tricks" really would make anyone say "wow!". For the most part they are suitable for young kids but adults would not be impressed. It lacks the real punch of a trick that makes things disappear, transform, or float. They are closer to simple card tricks, which are a dime a dozen. People can sense when items are forced, which is the problem I had with the esp card tricks. The chain trick is not bad, but again just not a lot of bang for your buck.
7 of 8 magicians found this helpful.
Did this review help you? Do you want to respond to this review?

fundamentalism Report this review
Pro Privacy ON (login to see reviewer names) on July 4th, 2008
the effects taught in this dvd are very basic effects the dvd is not worth 29.00 i am really glad i didnt pay for it but got it free through a promotion. i gave it a thumbs up be cause the first esp card is pretty good but still basic
7 of 9 magicians found this helpful.
Did this review help you? Do you want to respond to this review?

HAVE TO BUY CARDS Report this review
Pro Privacy ON (login to see reviewer names) on June 10th, 2016
THIS IS A VERY EASY TRICK TO LEARN BUT I'M VERY DISIPOINTED BECAUSE YOU HAVE TO BUY THE CARDS SEPERATE. TOTAL COST 12.72. HAD I KNOWEN THAT WOULD NOT HAVE BOUGHT THE DVD. I WOULD HAVE LOOKED FOR AN ALL INCLUSIVE SET. THE FACT THAT YOU HAVE NO IDEA YOUR GOING TO SPEND MORE MONEY IS A BIG TURN OFF.
6 of 8 magicians found this helpful.
Did this review help you? 3 comments
Bestsellers