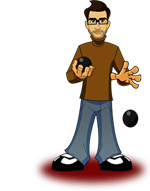 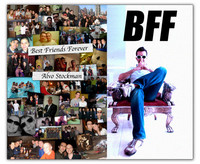 Today, when you order "Best Friends Forever by Alvo Stockman", you'll instantly be emailed a Penguin Magic gift certificate. You can spend it on anything you like at Penguin, just like cash. Just complete your order as normal, and within seconds you'll get an email with your gift certificate.

A secret writing technique for close-up performers. Learn this crazy skill and you'll be able to read minds and create stunning prediction effects under fire. This is next level.

"This is the best thing I've seen in a couple years." -- Bob Cassidy

"No matter where you are, who you're sitting with, you'll have this. Predict their thoughts, read their minds. It's whatever you want it to be, the potential is overwhelming." -- Alvo Stockman

From the unconventional mind of Alvo Stockman comes a revolutionary technique for group level mentalism. BFF isn't just one trick, it's an entire system for prediction you can use to create a limitless number of miracles. Here are some examples:

At a restaurant, with 3 friends, you offer a demonstration.

Ā“You guys know me so well... youĀ’re three of my best friends. I want to try something interesting. Whenever we talk, a lot of times, I feel like I know what one of you is going to say before you even say it. For example, John, if I said the word Ā‘barnĀ’ to you, whatĀ’s the first word that pops into your mind?Ā”

Ā“Ā‘HorseĀ’, right. Well if I predicted that, it wouldnĀ’t be so impressive. A lot of people would probably say Ā‘horse.Ā’ What IĀ’d like to try is something a little more difficult. IĀ’m going to try to predict a chain of associations that the 3 of you will have. For example, if I said Ā‘barn,Ā’ John said Ā‘horse,Ā’ Luke said Ā‘jockey,Ā’ and Michael said Ā‘helmet,Ā’ predicting the final word Ā‘helmetĀ’ would be considerably harder!

IĀ’m going to write down a word here, and IĀ’m going to try to start a chain of events that will end with Michael saying this word. IĀ’m going to cover it with my hand for now. Now to start off, John, whatĀ’s the first word you think of, when I say Ā‘blue?Ā’Ā”

Ā“WeĀ’ve known each other for a long time. And weĀ’ve had some great times, havenĀ’t we? IĀ’m thinking of one of those times. IĀ’m going to write down a word that reminds me specifically of that time, and I want the three of you to figure out not only what event IĀ’m thinking of, but the word that sums up that experience.Ā”

WhatĀ’s great about this plot is that it gets your friends to reminisce about some of the best times the four of you have had and to decide on one and a word. This elevates the mood of the group and builds rapport.

Ā“IĀ’m thinking of a time. A time that was special to the four of us. A very specific time, and I know that the three of you subconsciously know what IĀ’m talking about. IĀ’m going to write down the time here on the placemat.

Do you guys remember the time we were at the beach in San Diego and played beach volleyball with the womenĀ’s national team? We must have all been thinking about that subconsciously, because that was at right around 4:37pm, just like I have written here.Ā”

Toss out 4 different colored pens. Everyone grabs one, secretly writes their lucky number on the table in front of them and covers it with their hands. Using the remaining pen, you write your lucky number as well. All four pens are returned to the center of the table and after your three friends have revealed their 3 numbers, you reveal that yours is the largest one. WhatĀ’s not immediately obvious, is that your number is the sum of their lucky numbers!

With one friend, write down a word and cover it with your hands. Ask her to try and read your mind by looking into your eyes. Have her try to read the word youĀ’re thinking of. Ā“Window?Ā” she asks? Ā“Very close!Ā” you exclaim. Ā“I was thinking of 'wind'" you say as you uncover the word.

AND MUCH MORE! Read on..

While the method of this manuscript is a prediction technique, the magic of it is the involvement of a group of people sitting around bonding and reconnecting.

In an effort to be thorough, I looked up Ā“friendshipĀ” in Wikipedia and it says itĀ’s a term used to denote co-operative and supportive behavior between two or more beings. IĀ’m not sure thatĀ’s how I would have put it, but now that you know what friendship is, we can move on.

BFF grew from my desire for a magical routine I could use to bring people together. Specifically, I wanted a way to perform for my close friends and family that made sense, helped us all subtly remember the value of our relationships and could be performed in a casual environment.

What follows is my solution.

BFF - the good and the bad Report this review
Verified buyer Pro Privacy ON (login to see reviewer names) on July 28th, 2008
Stockman's BFF is a combination of a new technique for undetectable writing, and an approach to presentation.

If you have mastered a technique for undetectable writing, Stockman's thoughts on presentation, especially in front of a small group, are inventive and novel.

The technique side, however, is more challenging. When done as he describes, the hand position for undetectable writing is, as I view it, not particularly natural, that is to say not how one would normally hold the hands in that setting.

Perhaps more of a problem is the difficulty of developing adequate competence in the technique so that the writing is both undetectable and appears to be legible natural hand writing when shown to the audience. To become proficient requires more than hours to days, or even days to weeks of practice. It will take weeks to months of diligent practice to really become adept at the technique. This is not so much a criticism of the effect per se as of the advertising that does not really make clear what is required to master the effect, so that the buyer can make an informed choice.
3 of 3 magicians found this helpful.
Did this review help you? Do you want to respond to this review?

Not for everyone Report this review
Verified buyer Pro Privacy ON (login to see reviewer names) on February 28th, 2011
i still prefer my super sharpie, but this is great. i forgot my super sharpie at home one day (only human) when a friend of mine said that i should read his brothers mind. i told him i would then relized i didn't have my favorite tool one me. no problem, i said i needed a writing tool and grabbed a crayon from the front. issue solved. i dont want to reveal the trick but i will say you need to be at a table for this effect to work.
2 of 2 magicians found this helpful.
Did this review help you? Do you want to respond to this review?

Taking the Swammi into the 21st Century! Report this review
Pro Privacy ON (login to see reviewer names) on April 2nd, 2010
Ingenious. One word that describes this effect. Extremely versatile and unique. No more need to secure the swammi gimmick to your nail, this method takes all that away in a way that leaves you 100% clean at the end. Totally a mind blower and you can show your hands empty. Now how many other written predictions can you do that with?

BUY NOW!
2 of 2 magicians found this helpful.
Did this review help you? Do you want to respond to this review?

Really cool! Report this review
Pro Privacy ON (login to see reviewer names) on April 3rd, 2010
This isn't my favorite thing Alvo has put out. The effect is really nice and you can accomplish a ton of other effects with it, but it's not GREAT. It's just very cool. THe method is pretty simple but also really difficult to do and it will definitely take a lot of practice to master and get down. Alvo has always been my favorite magic teacher. It's simple and he knows how to get it points across to the reader/viewer. This package comes with a book, and some props. I won't go over the props, but let's say they are "interesting". When I first got this, I opened it up, and the cover is really cool. Plus, it's bound perfectly and a lot thicker than I had imagined. there are scripts, and other performance ideas in here, plus some practice techniques. If you are a mentalist that wants something new to add to your close up show, I suggest this.
1 of 1 magicians found this helpful.
Did this review help you? Do you want to respond to this review?

Pretty good! Report this review
Verified buyer Pro Privacy ON (login to see reviewer names) on April 2nd, 2010
This will require practise but I think the end result is worth it. If you do buy this then please don't be put off by what you receive in the package- if you practise enough then the effect will get the reactions you want.

I like Alvo's work, his effects are a bit quirky and a bit different and I'm a fan of his style. If you're the same then do buy this trick!
1 of 1 magicians found this helpful.
Did this review help you? Do you want to respond to this review?

interesting method Report this review
Verified buyer Pro Privacy ON (login to see reviewer names) on February 6th, 2014
It's nothing new. Just a secret writing method and some performance ideas. The method is not the easiest to master and takes some patience. The advantage is you can make it yourself, but it's not angle proof. I don't think it's worth , but I got it when it was on sale.
Did this review help you? Do you want to respond to this review?

Not too practical Report this review
Verified buyer Pro Privacy ON (login to see reviewer names) on January 29th, 2014
I did kind of like the idea with crayons but would take some work.
Did this review help you? Do you want to respond to this review?

Too much time Report this review
Pro Privacy ON (login to see reviewer names) on August 29th, 2010
I'm spoiled. I like the out the box into the routine type of tricks. This one is good, but would take a little time to master. If you do restaurants, then this could be very cool.
Did this review help you? Do you want to respond to this review?

BFF Report this review
Verified buyer Pro Privacy ON (login to see reviewer names) on April 5th, 2010
Alvo has once again produced a great effect. Mentalism should be incorporated into every magician's repertoire. Making accurate predictions has been made easy using this technique but having said that, it is only easy after you've mastered it. This effect will take a lot of practice to get right but once you've done that, you've got a killer effect.
Did this review help you? Do you want to respond to this review?

trick to do. Report this review
Verified buyer Pro Privacy ON (login to see reviewer names) on April 2nd, 2010
I like the idea behind this and I think that if really could be a good trick but this is very tricky to do, it will require alot of practice but if you can pull it off, yes it will work well. Again a good concept.
Did this review help you? Do you want to respond to this review?
Load more reviews
Bestsellers