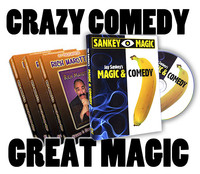 Today, when you order "Crazy Comedy Combo", you'll instantly be emailed a Penguin Magic gift certificate. You can spend it on anything you like at Penguin, just like cash. Just complete your order as normal, and within seconds you'll get an email with your gift certificate.

ONE WEEK ONLY PRICE. The TWO BEST comedy and magic DVD courses in the world, now together for a LAUGHABLY LOW price.

There are few forms of misdirection better than COMEDY -- and even fewer sure-fire ways to entertain. The benefits are endless. But the sad misconception about FUNNY is that you either "have it" or "you don't."

The truth is, NOBODY was simply "born funny" -- not only did they have to LEARN it, but they worked their butts off if they ever got REALLY good.

Two of the BEST examples of true students of comedy and magic are Rich Marotta and Jay Sankey. http://trick.ly/3HW

Both are hilarious, amazing, and BOTH studied psychology in University. Coincidence? I don't think so! These two masters are funny, self-aware, and ARTICULATE enough to describe what it is that they're doing.

They were also both GENEROUS enough to share their insight and expertise with us. I've been in this game a long time, and these are the two ABSOLUTE BEST courses in magic and comedy on the planet:

In "Comedy Magic", Rich Marotta shares a TON of great, commercial magic that can go RIGHT into your act. It's practical, easy, and as you'll see, VERY entertaining. He goes in depth, hands on with all of the tricks, and shares all of his experience from his years in show business. He also shares what it took to get from being a TEACHER to being a professional entertainer. A fantastic 3-volume set.

Finally, Jay Sankey comes in and teaches some of the most beautifully insightful lessons in comedy (and more importantly ENTERTAINMENT) to take what you're already doing and crank up the funny. In 20 years I've never heard anyone talk more articulately about what makes something funny as Jay Sankey. If you only know him as a wacky trickster, you're in for a big surprise: Jay takes humor seriously!

The myth that the "trick" makes a magician is FAR off the mark. The real "secrets" that professional magicians are keeping are how they entertain. Which makes these DVDs some of the most valuable in all of magic.

PROFESSIONALS: If you didn't realize that I was speaking directly to you during this whole email, let me clarify ;) If you're performing magic for money, this course is a must. It will most certainly pay for itself in a single show and I'll even go one step further. If for whatever reason you're dissatisfied with the Crazy Comedy Combo, I will personally refund you no questions asked. I want you to feel as comfortable investing in this as possible. If you have any questions, email us at magician@penguinmagic.com and get a fast response from a fellow pro.
Questions about this product

Entertaining and informative Report this review
Pro Privacy ON (login to see reviewer names) on July 23rd, 2010
This to me is less of a trick teaching set and more of an example of how to use comedy. Granted Rich's DvD's have more tricks taught in them, but for me I enjoyed the display of how they used comedy. Both Sankey and Moratta have different styles. Sankeys DvD was in lecture format and had much to say on how to use comedy, when and where. Rich Marotta taught a lot of effects and gave subtle hints on how he uses comedy in his explanations. Its important to know how and when to ad humor to magic. This set gives you insight.
4 of 4 magicians found this helpful.
Did this review help you? Do you want to respond to this review?

Good for the price. Report this review
Verified buyer Pro Privacy ON (login to see reviewer names) on July 20th, 2011
If you want new effects (Mostly fillers) for your repertoire (Close-up or walkaround) then, for the price (cheap), this set is good. But I would get Gregory Wilson or Bill Malone DVDs first tough. Bill Malone is more about cards, but Gregory have a lot of stuff out there (Two close up card DVD's, his impromptu "On The Spot" DVD and his In Action series are a must). They have better material magic wise, and those guys are funny.

Jay Sankey's lecture is more about finding comedy in close-Up situations, and not about writing (or scripting) funny lines and patter about your effect. He teaches a trick in it (a card to pocket)

Rich Marotta's DVD's are cool. you will find a lot of effects you will use (The walkaround ones are great, definite workers). But the DVDs are more about magic than comedy.
2 of 2 magicians found this helpful.
Did this review help you? Do you want to respond to this review?

Rich Marotta makes it worthwhile Report this review
Verified buyer Pro Privacy ON (login to see reviewer names) on October 8th, 2011
The Rich Marotta DVD's were very good. He doesn't really teach you how to do comedy but has some great examples. And he teaches quite a few good tricks. I watched all 3 DVD's in one sitting. They were really enjoyable and kept my interest the entire time. I will definitely watch them multiple times and make tons of notes. I will use some the tricks taught as well. Very good DVD's. Well worth the price.

The Sankey disk... well I'm glad it was only more for the combo so I really didn't waste much money. He uses a bunch of clips from a lecture but they put have no flow. It looks like he just took a bunch of random clips and threw them on a disk. Most of them repeat the same things. And I don't mean same ideas, I mean the same clip. It looks like it was all taken at one lecture. The only funny parts were his old stand up stuff back from when he still had hair. His aimless rambling in the lecture really didn't teach anything.

Buy this for Marotta Report this review
Verified buyer Pro Privacy ON (login to see reviewer names) on August 31st, 2011
Marotta's part of this is simply brilliant. The Sankey DVD is a tremendous let down.

Marotta demonstrates tremendous performance and wonderful effects. I am extremely impressed, and use a ton of this material on a regular basis. I would recommend picking this up simply for Marotta's 3 DVD's. However, the Sankey DVD is a disappointment. Sankey is normally a rock-solid name, and if he releases it, I trust it to be worth the time and money. Unfortunately, this is a complete miss on his part. His "lecture" rambles and is gloriously devoid of ACTUAL advice. It must be what it's like to be in his brain for a short period of time. There seems to be thoughts and concepts flying every which way, but they never really materialize into something solid that you can say, "I will definitely try that," when the DVD is over. In my opinion, it's akin to a lot of self-help material. Rather than give you hard and fast ideas towards improvement, it is more along the lines of, "be witty and spontaneous", or "entertainment is paramount". Yeah, I get that, but if I didn't tend toward it already, simply telling me to do it isn't going to help me get there.

I would very much recommend the Marotta series, but you'll get more mileage out of Gazzo's "Read Between The Lines" than you will out of the Sankey DVD included in this deal. I'm giving it four stars completely due to Marotta. The fifth star is docked because Sankey didn't hold up his end of the bargain.
1 of 1 magicians found this helpful.
Did this review help you? Do you want to respond to this review?

Marotta and Sankey Report this review
Verified buyer Pro Privacy ON (login to see reviewer names) on January 12th, 2012
The Marotta DVD set was very helpful. I have always been a serious magician without the comedy flair. I have began to work comedy clubs and Rich's act was very good for the crowd I entertain. Taking bits and pieces from other full time workers help add some substance to my act. I would give
Marotta 5 stars and 3 stars for Sankey.
Did this review help you? Do you want to respond to this review?
Bestsellers