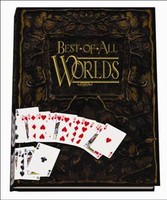 Today, when you order "Best of All Worlds", you'll instantly be emailed a Penguin Magic gift certificate. You can spend it on anything you like at Penguin, just like cash. Just complete your order as normal, and within seconds you'll get an email with your gift certificate.

Best of All Worlds (Book)

The definitive resource on the cleverest card trick of all time. Order today and get Out of this World FREE to download immediately.

(5 customer reviews)
+ Add to Cart
Review Wishlist
In stock: usually ships within 24 hours!
Order in the next 9 minutes and it will ship TODAY!
book
card
close-up
Tweet

Filled with history, stories, and, most of all, magic, Best of All Worlds pays tribute to one of the greatest card tricks of all time: Paul Curry's classic card effect Out of This World.

Best of All Worlds is not just a book about a 'Magic Trick". It is an extensive, in-depth look at what Dai Vernon called "the card trick of the century."

Here are SOME of the reviews:

"This is certainly the most complete resource on this subject that I have seen. If you are thinking about adding this killer trick to your repertoire, you need to study this book to find the method that best fits your needs. It's all in there. All you need to do is start digging!" - Doc Eason

"This book is a true resource for lovers of the Paul Curry Classic, Its a honor to be part of it" - Jon Armstrong

"The quintessential reference work for the well stocked magic library, collecting final words on one of the greatest card effects of all time" - Michael Ammar

"This book is like visiting the brains of different magicians and seeing how they think." - David Regal

"Best of All Worlds is an excellent tome that will save you countless hours of research on the greatest card trick ever invented. I love it!" - Daryl, The Magician's Magician

"Best of All Worlds is a first-class production"- Karl Fulves

"A unique collection of what most of us believes to be the best card trick for lay audiences. Well done!" -Roberto Giobbi

"Your beautiful book arrived to day, many many thanks. I'm privileged to be part if it - I'm sure I'll feel even more so when I have the chance to work through it. Good luck with - I hope it is as successful as it is elegant."-J. K. Hartman

"Your Best of All Worlds has reached my doorstep, and it is a handsome effort. I've begun paging through it, reacquainting myself with certain handlings, enjoying others new to me. It is very generous of you to have sent me a copy, and I assure you, it will provide pleasure and future reference. Thank you"

"I got the book and had my money's worth by the second page of Weber's intro. You guys did a great job on this -- great title, great organization, excellent references." -Bob Farmer

"We are impressed by the production value - it is beautifully designed." -Norm Nielsen Magic

Chronicling the creative evolution of this single magical effect over seven decades, Best of All Worlds brings the history and challenges of Out of This World to light. It is a unique collection of over thirty routines -- some old, some new, some never before seen in print -- submitted by the world's leading magicians. In addition to their personal performances, the contributors have given insight into and musings about how this classic effect has influenced their magic.

Out of This World has influenced some of the world's greatest magicians. It temporarily put a World War on hold. The odds of it actually happening are staggering.

there are so many different routines and perspectives in this book. many of them contradict each other, which is what makes the book so awesome I think. it allows you to see the wide range of perspectives that the magicians that inspire us have and choose what works best for you as an individual.

I got so much out of reading this. It's one of those books I like to just open to a random page and read. I think card people should definitely have it.
2 of 2 magicians found this helpful.
Did this review help you? Do you want to respond to this review?

Best of All Worlds Report this review
Verified buyer Pro Privacy ON (login to see reviewer names) on September 24th, 2014
Great collection of methods and presentations for this perennial favourite. I suggest you read only one or two chapters in one sitting. If you read more than that (in one sitting) it becomes to feel rather repetitive.

I'm surprised that Arturo de Ascanio's version wasn't included - It's one of my favourites.
1 of 1 magicians found this helpful.
Did this review help you? Do you want to respond to this review?

Not only the title, but it is the Best of all Worlds Report this review
Verified buyer Pro Privacy ON (login to see reviewer names) on July 11th, 2020
This book is a great history lesson on one of the "Best Tricks in Magic" according to many surveys. There are nice stories in the "Interview Section" on how many top magicians recall the first time they ever saw the effect in action. Best of all, there a many nice versions by many great magicians both alive and passed on covered in these pages. Plus, there are still different versions that have come out since the book that are not covered giving you room for even more ideas out there. A fantastic reference for any card magicians bookshelf. Highly recommended.
Did this review help you? Do you want to respond to this review?

Really great book Report this review
Pro Privacy ON (login to see reviewer names) on March 6th, 2011
I got this book a little while ago * I have to say I probably use the trick all the time. I recommend it to be put in your routine & see the reactions you will receive.
Did this review help you? Do you want to respond to this review?

Out of this world Report this review
Pro Privacy ON (login to see reviewer names) on September 21st, 2010
I bought this effect back in the mid 80's and have worn out many decks using this trick. It will blow anyone's mind who sees it. I love performing this because it just amazes me every time I see it. It looks like a real miracle because it happens while the spectator handles the cards. If you don't have this, BUY IT, NOW. Any borrowed deck and any time.
0 of 1 magicians found this helpful.
Did this review help you? Do you want to respond to this review?
Bestsellers