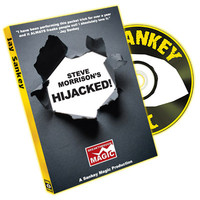 Today, when you order "Hijacked (with DVD) by Steve Morrison and Jay Sankey", you'll instantly be emailed a Penguin Magic gift certificate. You can spend it on anything you like at Penguin, just like cash. Just complete your order as normal, and within seconds you'll get an email with your gift certificate.

Hijacked (with DVD) by Steve Morrison and Jay Sankey


Featuring an incredible collection of FIVE OUTSTANDING EFFECTS including:

. THINK OF A JACK

The fronts and backs of four Jacks are slowly shown to the audience and given to a spectator to hold. The spectator is asked to "think of any Jack." A moment later, the magician removes the named Jack from his pocket! Then the four cards held by the spectator are revealed to be the FOUR ACES! No sleight-of-hand. The extremely devious gimmicks do all the work for you! (And yes, the spectator can name ANY Jack!)

A pack of cards is spread face down and a spectator asked to touch any four cards. Impossibly, the four cards turn out to be the four Jacks! Commenting that, "four Jacks is a great poker hand, but they could still be beat by four Queens and even four Kings," the magician changes the four cards into an even stronger poker hand, THE FOUR ACES!

The four Jacks are introduced and the magician says they are "marked." The magician draws attention to the fact that there is a different letter written on the back of each of the Jacks including a 'C,' an 'A,' an 'S', and an 'E.' The four cards are laid face down on the table in a row so they spell the word 'CASE.' The magician then rearranges the cards so they spell 'ACES' and then turns over the four cards to reveal that all four Jacks have impossibly changed into THE FOUR ACES! (And again, the backs and fronts of all the cards are completely shown!)

The four Jacks change places with four Aces HELD IN THE SPECTATOR'S OWN HANDS!

wow! it's a killer.. Report this review
Verified buyer Pro Privacy ON (login to see reviewer names) on June 17th, 2013
I never knew a few cards can be powerful, I priced the entire DVD and one week I got it down faster than that but I wanted to master it completely, once I mastered it I took it to work and a blue people away, they didn't know what to say. I'm super amazed and happy with this purchase Jay Sankey did a good job teaching too. the ic its really not that hard, but like all great magicians you should practice and you should master it before you take it to the streets.. add to cart you'll be so happy with it.
1. think about Jack absolutely amazing
2. little poker is also a color
3. A.c.e.a. is my favorite one because they have no clue what's coming and they just get blown away.
4. 4 x impossible a killer magic in the specktators hands
5. and Rainbow Jack it's nice but not for me.
Did this review help you? Do you want to respond to this review?

Don't want to give anything away, but I use roughing fluid.
Did this review help you? Do you want to respond to this review?

great Sankey Report this review
Verified buyer Pro Privacy ON (login to see reviewer names) on May 28th, 2013
i,ve got several products from Mr. Sankey and i think this man is pure genious. Hijacked is brilliant, amazing and very easy to perform. I absolutely recommend this
Did this review help you? Do you want to respond to this review?

Ok Report this review
Verified buyer Pro Privacy ON (login to see reviewer names) on February 28th, 2011
The effect is so visual and just great, but at the end the cards can't be examined, for that 3 stars. It's a great packet trick, I would recommend it, but better is: Bring me to the head of packet trick by mark elsdon!!!!
0 of 1 magicians found this helpful.
Did this review help you? Do you want to respond to this review?
Bestsellers