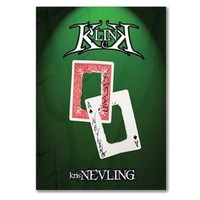 Today, when you order "Klink", you'll instantly be emailed a Penguin Magic gift certificate. You can spend it on anything you like at Penguin, just like cash. Just complete your order as normal, and within seconds you'll get an email with your gift certificate.

From the creator of The ReinCARDnation, Kris Nevling once again proves why he has become one of Magics most creative thinkers. Never has there been an easier or more deceptive card link. Its the most practical linking card effect in existence. Also included is Kris Nevlings Million Dollar Card Trick.People asked if a card can be ripped up, completely restored and handed back to the spectator in one piece. Kris teaches you just that with his Million Dollar Card Trick. The method is ingenious.

Two powerful effects Report this review
Pro Privacy ON (login to see reviewer names) on December 14th, 2018
The title effect is simple to explain. Have the spectator choose two cards. (The choice can be free, but you may have to force a card on the spectator. More about this point later.) Both cards are torn so that their centers are removed and what remains is a pair of "frames" (the outer parts of the cards). You then cause the two solid frames to link. Once they are clearly linked, you separate them and instantly hand them out for inspection. Both cards are intact, and there is no apparent way that they could have been joined.

There are many things you cannot do with the two linked cards. You cannot hand them out while they're linked or hold one card and show the other dangling from it. That said, the effect looks incredibly impressive. It absolutely looks as if the two cards are separate, then linked, then separate. Put another way, this doesn't look like a card trick; it looks like real magic, and the fact that the two torn cards are handed out immediately for inspection heightens the illusion.

There are no gimmicks, and the effect can be performed completely impromptu. If, say, you are doing table magic at a restaurant or bar and someone hands you a fresh deck of cards, you can work this trick with that very deck. (You would, however, destroy two of the cards in the deck when you tear them.)

There are some concerns with angles, and there is some practice required, but the effect does not require any particular skills in terms of sleights of hand. Some sleight of hand is required, of course, but would you really expect an effect like this to work without either gimmicks or sleights? After all, that'd pretty much be real magic.

There is a second, completely different effect on the DVD. It's a torn-and-restored effect, and, honestly, it's not one of my favorites, but that may be largely because I didn't like the routine used in the video. My complaint there is that the magician appears to fail to find a signed card. There are many effects or routines that involve supposed failures, but the issue here is that the failure comes before the tearing and restoration and is not resolved until afterward, meaning that too much time elapses.

But, of course, it's possible to change routines, and the basic method and effect of the torn-and-restored portion is powerful. That said, there are other torn-and-restored effects available, including one from the creator of the linking effect here.

So get this for the linking cards. And practice for a long time in front of a mirror before going out to demonstrate the effect. Done right, the effect is extremely powerful. People will gasp, shake their heads, or laugh in disbelief. Really.

As for the video, everything is explained extremely clearly and shown in more than enough detail. A few alternate approaches to the linking effect are presented, including one that allows you to have the linked cards separate in a spectator's hand.