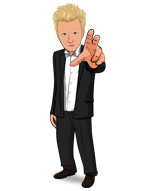 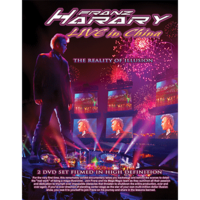 Today, when you order "Live in China by Franz Harary", you'll instantly be emailed a Penguin Magic gift certificate. You can spend it on anything you like at Penguin, just like cash. Just complete your order as normal, and within seconds you'll get an email with your gift certificate.

Live in China by Franz Harary

For the very first time, this remarkably candid documentary takes you backstage and behind the scenes to detail the "real work" of being a mega-illusionist. Join Franz and his Mega-Magic team as they summon all their passion and dedication to triumph over impossible obstacles that threaten to shutdown the entire production, over and over again. If you've ever dreamed of standing center stage as the star of your own multi-million dollar illusion show, you owe it to yourself to join Franz on his journey and share in the lessons learned.

Great Magic, But Not Much For Magicians Report this review
Verified buyer Pro Privacy ON (login to see reviewer names) on December 22nd, 2013
This is one of those reviews where I wish there were more than five ratings, as my true rating would have been a 3-1/2. But being that I got this as part of a Cool Box special, and that it's near Christmas, I'll round up. This is a two-disc set, and I'd rate the first a three and the second a four.

The first DVD includes next to no magic, and instead spends about 90 minutes telling you how hard it is to produce a show while being challenged by culture, weather, budget, language, scheduling,personalities, etc. I got that message clearly from the trailer and really didn't pick up much more from my 90 minute investment.

Things picked up on the second DVD, which was all footage from the actual show. He had some impressive illusions that rivaled Copperfield, including one that he ended up selling to Copperfield.

But it was the DVD commentary track that I both found most interesting and most disappointing. He got into his magic philosphy a bit, which I found interesting, but was awfully stingy when it got to methodology. He said he would be talking in "code," lest the DVD fall into the hands of any non-magician. But the extent of his coded revelations was that to vanish a silk in his hand, he "used a 'tip' if you know what I mean."

Yes, we know what you mean. And for a DVD that was marketed by a magician to magicians, I really expected more, if you know what I mean.
3 of 3 magicians found this helpful.
Did this review help you? Do you want to respond to this review?

OK Report this review
Verified buyer Pro Privacy ON (login to see reviewer names) on March 23rd, 2014
Quite a hectic ride and definitely worth a watch if you've been interested in staging a large stage show.
I wish there was more rehearsal stuff on it as it seemed to concentrate on the staging problems more than the magic, but on saying that, I did enjoy watching this DVD. It's more of a production getting set up DVD than magic being shown.
The show DVD was OK, but I wish it had the full show on it rather than just the TV special.

I found it interesting and I'm pleased I got it.
Also a quick shout out for Penguin Magic's great service. Thanks
Did this review help you? Do you want to respond to this review?
Bestsellers