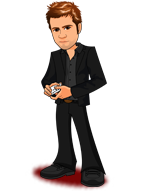 Today, when you order "Card Tricks For Money by John van der Put", you'll instantly be emailed a Penguin Magic gift certificate. You can spend it on anything you like at Penguin, just like cash. Just complete your order as normal, and within seconds you'll get an email with your gift certificate.

12 JAW-DROPPING routines taken directly from the working repertoire of John van der Put, creator of Piff the Magic Dragon. This is the material John used to earn his living from as a professional close-up magician, before he decided to pack it all in and become a magic dragon.

VISUAL DECK PRODUCER
The production of a deck of playing cards from an unfolded card box.

LOSING FACE
An all back ace routine with no gimmicks that John won The Magic Circle Close up Magician of the Year 2011 with.

FLYPAPER
ThreeFly with a playing card and a bonus restoration at the end.

SMOKED
A cigarette rises out of a borrowed pack. Resets immediately and ends totally clean.

E.T.E.
Everything to envelope. A signed playing card and borrowed, signed bill end up in a sealed envelope. This is the effect John fed himself with for five years in the trenches.