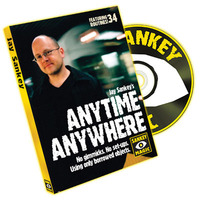 Today, when you order "Anytime Anywhere by Jay Sankey", you'll instantly be emailed a Penguin Magic gift certificate. You can spend it on anything you like at Penguin, just like cash. Just complete your order as normal, and within seconds you'll get an email with your gift certificate.

For years, magicians and mentalists have been asking Jay about his unreleased impromptu work. Now on this very special DVD, Jay shares a mind-blowing collection of 34 routines, the vast majority of which have never before appeared in print, on video or DVD.

Jay also shares the real work on such essential topics as the power of impromptu performances, combining magic and mentalism, magic with a borrowed deck, scripting, the importance of simplcity, and handling props within the impromptu setting.

Never again say, "Sorry, I didn't bring anything with me!"

Here are just a few of the 34 incredible effects...

The Wager: Killer mentalism with borrowed coins! (You even borrow the prediction!)

Slow Motion Coins #2: The much streamlined handling of Jay's acclaimed coins across effect.

Soft Spot: A key melts on and off a borrowed key ring!

Inside Out: Jay finally tips the "real work" on this close-up classic including the never-before-revealed 2-phase handling!

Seed Money: A pair of coins change, not once, but TWICE!

Sight Unseen: You'll perform this lethal demonstration of "behind your back" paranormal ability EVERYWHERE!

Apparition: The card the spectator has in mind literally APPEARS in your empty hands! Guaranteed gasps!

The Perfect Switch: The ultimate coin switch for when the crowd is BURNING your hands!

Against All Odds: The magicians sends a thought to the spectator three times in a row!

Pawnbroker: A wildly magical transposition routine with just a coin and a ring!

Somebody Else's Money: The new king of commercial card effects!

The thing with Sankey. Report this review
Pro Privacy ON (login to see reviewer names) on April 4th, 2010
The thing about Jay Sankey is he doesn't like to create a DVD with a COLLECTION of other peoples good effects... He creates hundreds of his OWN good, impromptu effects. That is what really makes this DVD and anything else by Sankey an incredible value.

This DVD is around 23 dollars... Explained on here are almost 30 effects. You do the math. Plus, ALL of these effects are fantastically good, and most of them are ones that I do from time to time when "asked to see a trick".

This DVD is a GREAT value; don't let this slip by.
2 of 2 magicians found this helpful.
Did this review help you? Do you want to respond to this review?

another winner Report this review
Pro Privacy ON (login to see reviewer names) on April 4th, 2010
bought this from sankey magic a while back and loved the practicality of these routines. after performing some of these routines, you will not underestimate the power of using borrowed objects and everyday objects. Personally, i love the slow motion coins, which is taught in great detail and very visual for everday use.
1 of 1 magicians found this helpful.
Did this review help you? Do you want to respond to this review?

To me, this is REAL magic Report this review
Verified buyer Pro Privacy ON (login to see reviewer names) on February 1st, 2013
There are some throw away tricks here....
but you get a ton of tricks!

I love the idea of being able to do something magic, ANYTIME!

I like some gimmicks too, but you need to be able to back up those tricks with some of these.
Did this review help you? Do you want to respond to this review?

Hmmm Report this review
Pro Privacy ON (login to see reviewer names) on April 7th, 2010
I didn't take too much away from watching this DVD. Most of the effects are very basic, and just because a trick is impromptu doesn't mean it can't be strong (just look at Greg Wilson's effects). As always Jay uses a handful of sleights and milks them for all they're worth, so I didn't learn anything new.
0 of 1 magicians found this helpful.
Did this review help you? Do you want to respond to this review?

Not worth the price Report this review
Pro Privacy ON (login to see reviewer names) on October 10th, 2014
Thank god i got this used! I paid 10 bucks and even then i still feel a little ripped off. There's nothing new. Also, some of the effects he tries to teach just suck so bad. There's a couple good ones. If the price was lower it would be fine.
0 of 4 magicians found this helpful.
Did this review help you? Do you want to respond to this review?
Bestsellers