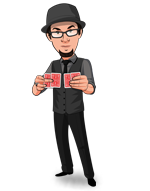 Today, when you order "Spare Change by Josh Janousky", you'll instantly be emailed a Penguin Magic gift certificate. You can spend it on anything you like at Penguin, just like cash. Just complete your order as normal, and within seconds you'll get an email with your gift certificate.

In Spare Change you will learn 4 super visual coin routines and 4 bonus effects perfect for the strolling magician!

In Spare Change, you will learn FOUR super visual coin routines that are perfect for walkaround magic. Shot in HD, this download is nearly 50 min long with multiple live performances, studio performances, and voice overs to guarantee that you will master these effects in no time.

Ninja Coins Across: A very visual, impromptu coins across. As seen in Linking Ring magazine, this is a routine that you will find yourself using all the time.

Coinception: A multi phase Three Coin routine where the coins appear, vanish, and transpose. Perfect for strolling gigs, this routine is the perfect opener.

C.S.T.: A Copper Silver routine that takes place entirely in the spectators hands! This routine is fun to perform and will leave your spectators amazed. This routine was also featured in Linking Ring Magazine (July 2012).

TBD: A prediction effect when the spectators thought of coin not only matches a prediction that has been in their hand the whole time, but the coin also vanishes and reappears in the most startling place.

In addition to the four routines listed above, you will also learn four bonuses!

Ninja Production: A three coin production that leads in perfectly into Ninja Coins Across. Uses a variety of palms, so its a perfect way of practicing your concealments.

Pivot: The traditional pivot move from card manipulation, adapted to a coin. The perfect move for any Miser's Dream routine, it can also be used as a vanish!

The Wipe Change: With just a wave of your hand change any coin (can be borrowed) into a different coin or into any small object. Super easy to learn, this will make a great addition to a Spell Bound routine

The Nothing Vanish: A coin is crumpled up into a tiny piece of nothing, only to reappear in previously empty hands.

While the routines is this download won't take long to learn, an intermediate knowledge of coins is encouraged. All the sleights needed are taught in detail.

Some routines may require the use of an Expanded Shell, a Copper/Silver coin, or a Scotch and Soda gimmick.

You won't be left with Spare Change when you get this download Report this review
Pro Privacy ON (login to see reviewer names) on July 14th, 2012
Spare Change by Josh Janousky is a great coin magic tutorial that you'll want to add to your collection.  First off let me tell you these routines aren't for beginners but don't let that change your mind about adding these effects to your set.  This is a total compliment to Josh because I know this wasn't intended to be a beginners  series of effects. Spare Change will give you the ability to learn four very visual coin routines that are great for walk around street magic.  The DVD runs about 50 minutes long and you will see several  live and studio performances.   You'll get a great understanding of the teachings and performances and be able to perform and master these awesome effects pretty quickly.    You won't learn basic coin handlings here...but you will learn some mind blowing effects to add to your arsenal so you can slay your audiences minds.  If you have an intermediate understanding of coin magic then Spare Change no doubt is a great choice to add to your repertoire. If you only have a basic understanding of coin magic then now is the time to step up your game and  get Spare Change so you can take your coin magic to the next level .  The routines won't take too long to learn but an intermediate knowledge of coins is recommended,  don't worry all sleights needed are taught by the One & Only Josh Janousky.  Just a heads up, some  of these routines may require the use of an Expanded Shell, a Copper/Silver coin, or a Scotch and Soda gimmick.

My favorite effect is C.S.T.: A Copper Silver routine that takes place entirely in the spectators hands! Josh adds his own spin to the classic Copper Silver routine which is very creative and I've never seen it done this way before.  This routine was so good it was recently featured in Linking Ring Magazine (July 2012).   My second favorite routine is Coinception:  This is a multi phase three coin routine where the coins appear, vanish, and transpose. This one is perfect for walk around , and is a great choice to use as an opener.  Then there is Ninja Coins Across: A very visual, impromptu coins across. As seen in Linking Ring magazine, you'll probably find yourself reaching for this quite often because of the great reactions will get when blowing your spectators minds.
TBD: A prediction effect when the spectators thought of coin not only matches a prediction that has been in their hand the whole time, but the coin also vanishes and reappears in the most startling place.

In addition to the four routines above, you will also get four bonuses! You know in the past You've paid $30 to learn just one coin effect (I know I have) but for only $10 bucks you get a total of 8 effects,  that's only $1.25 per effect.  You can't beat that!
2 of 2 magicians found this helpful.
Did this review help you? Do you want to respond to this review?

When Josh told me that he was considering releasing a download, I thought Great, another coin download I didnt expect much, especially since he was producing it independently (which, due to the Wire, has rendered most magicians unable to judge what is good and whats not in the magic world).

Months later, Josh sends me the trailer. I was in Starbucks as I watched it. As the baristas stared as if I were possessed, my jaw dropped. I hadnt seen a trailer that was that well filmed and edited in a very long time. No stop signs, no street lights no metal music. Just a demo that showed the magic in an aesthetically pleasing manner.

The download itself explains 4 effects and several sleights. The quality of the video ranges, but for the most part is incredibly well filmed.

Though I must say that Josh expects that you know a lot of moves before you buy the download Classic Palm, Pointing Transfer etc. He does explain everything, but for some of the moves, I felt like the explanation was very brief.

Overall? I liked this download a lot. I found a few ideas that Ill be putting into use in my own performances. It was fun to watch, and for $10? I think its definitely worth the money even if you only get one usable effect out of it.
1 of 1 magicians found this helpful.
Did this review help you? Do you want to respond to this review?

Fantastic! Report this review
Pro Privacy ON (login to see reviewer names) on July 15th, 2012
In this 50 minute download, Josh is sharing 4 real-world worked effects plus some bonus ideas. These do require gimmicks (c/s + expanded shell), but are nicely put together and will be some strong coin magic to add to your existing routines.

In most $10 downloads you'll buy a single move or idea, but to score 4 real routines that are coming from a pro's set is a steal. Buy it.
1 of 1 magicians found this helpful.
Did this review help you? Do you want to respond to this review?

Spare Change Report this review
Verified buyer Pro Privacy ON (login to see reviewer names) on June 7th, 2015
Refreshing handling and enjoyed it. Will practise to use.
Did this review help you? Do you want to respond to this review?

Very Nice. Report this review
Verified buyer Pro Privacy ON (login to see reviewer names) on August 23rd, 2014
I have been searching for a no table needed coins across routine and I have finally found it. This download is worth every cent of the cost beacause of that AWESOME Ninja coins across routine. Its one of the easiest but not to easy. And the other none gaffed routine was not bad. Only reason I gave 4 stars is because the teaching could have been a little better. Ninja coins across is top-notch.
Yes I would recommend this to a friend.
Oh, I feel that three or more coins going across is pro coin work and is usually very difficult that makes this download even more valuable for its great moves.
Did this review help you? Do you want to respond to this review?
Bestsellers