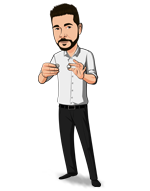 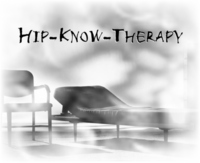 Today, when you order "Hip-Know-Therapy - Paul Carnazzo", you'll instantly be emailed a Penguin Magic gift certificate. You can spend it on anything you like at Penguin, just like cash. Just complete your order as normal, and within seconds you'll get an email with your gift certificate.

Effect:
The mentalist displays a test card from a hypno-therapy training center, explaining that this test is similar to the Rorschach test, in which the subjects perception of abstract images are analyzed. With this Hypno-Therapy card, letters, rather than images are used. It is explained that the card can also be used to see if someone is a good subject for hypnosis/hypnosis therapy.

The card is shown to have an Induction side, which is used to place the subject in an altered state of awareness.

When the subject completes this induction phase, the inside of the card is displayed and the subject is asked if they can visualize a word or words appearing within a jumbled list of strange looking letters, and if so, to keep this information to themselves for now.

The subject confirms that he can clearly see two words.

The induction side is then used to remove the subject from this altered state, and it is explained that there are actually no words on the card, but due to the altered state that the subject was in, he was able to tap into certain areas of his personality where he can benefit from some improvement. The subject is instructed to take a second look at the card, and then verifies that there are NO words on the card...only an arrangement of random letters!

The mentalist goes on to give the subject an accurate description of their personality, and then, amazingly is able to reveal the two words that were likely to appear only in their mind, based on their personality.

The Hip-Know-Therapy card can be examined by the participant and shown that the words that they saw were indeed only in their imagination, as the card does not contain anything but jumbled letters. They will be sure they saw words appear on the card, but it is clear that there arent any words on the card.

Only one card is used (which is examinable). No dual reality or instant stooging!

A 13 page PDF with a printable image for the Hip-Know-Therapy card. The PDF includes the full routine, images and construction instructions.

Please note that the card as is is performable in English, but there is a template included of the card with no text, so that you can customize the card in other languages with just a little work.