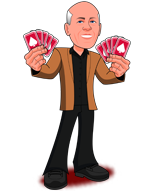 Today, when you order "Card Tricks for the Fractured Mind by Peter Duffie", you'll instantly be emailed a Penguin Magic gift certificate. You can spend it on anything you like at Penguin, just like cash. Just complete your order as normal, and within seconds you'll get an email with your gift certificate.

All Using a Regular Deck.

And all at a GREAT Price!

K.F.C.
A card attached to a ribbon with a sticker changes into the selection.

Misdirection Monte:
A bluff explanation of Three Card Monte ends in the revelation of a previously signed selected card.

From Beyond the Veil:
A two-card discovery with a little help from the spirit world!

Biddle Wed:
Another look at the classic Hofzinser plot where Kings and Queens magically marry!

Numberville:
A self-worker based (loosely) around the Card at any Number plot. The effect is almost hands off.

Royal Apex:
You cause the four Queens to vanish one by one. Then, in a fast series of actions, you cut the deck into four piles, each with a face up King on top. Finally, you reveal that each King has found his Queen.

Populace Revisited:
A different handling for a previous effect that appeared in Covert Concepts. In this version, all four Aces are visible at all times.

Post Production:
A trick with an invisible Post-it Note becomes a Miracle with a "visible" Post-it Note!

Searles Aces:
My handling for an Ace effect that appeared in the Lin Searles Folio of Pallbearers Review. In this version, the X cards that are dropped on each Ace can be shown to be random cards.

Safe Cracker:
A Four Spot is inserted into the deck, which you immediately crack open at the middle to reveal a display of four single spots  the four Aces!