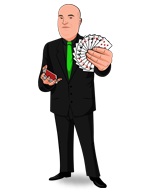 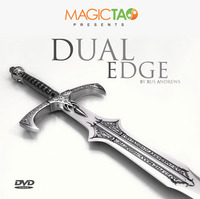 Today, when you order "Dual Edge By Rus Andrews And Mark Bendell", you'll instantly be emailed a Penguin Magic gift certificate. You can spend it on anything you like at Penguin, just like cash. Just complete your order as normal, and within seconds you'll get an email with your gift certificate.

Imagine telling a Spectactor that, with their help, you are going to create the perfect coincidence.

You hand a small envelope to the Spectator and ask them to put it somewhere safe; perhaps in their pocket.

You and the Spectator then bring the cards out from behind your backs and spread them, face down, on the table. This shows two reversed cards; the two cards make the perfect blackjack hand; demonstrating that, indeed, coincidence has taken place.

You now show that the prediction cards are from the deck that is being used; the two cards that were reversed by you and the Spectator have completely different backs to the rest of the cards.

To take things a step further, and to show that there was no way that any other cards could have been reversed, the rest of the deck is now spread out on the table  every single card in the deck is completely BLANK!

This is DUAL EDGE a joint collaboration between Rus Andrews and Mark Bendell.

Instead of a blank deck you can just use a normal deck.

"I've been playing with this today.
It really is great and I'll be using it at this weeks weddings for sure!
Rus has taken the "reversed card match" effect to another level with this.
The added kickers of the odd backs followed by a deck of blank cards will fry laymen, and most magicians alike.
The quality of the DVD my Magictao is first class.
A live performance followed my a clear concise explanation.
Rus is a clever thinking honest guy, an I can't wait to see what lease he releases for us in the future!! "
MATT WAINWRIGHT

dual edge Report this review
Verified buyer Pro Privacy ON (login to see reviewer names) on May 2nd, 2016
Dual Edge is an amusing trick with incomprehensible end you have to practice a bit but it is worth investing the time.
Did this review help you? Do you want to respond to this review?

A+ trick! Report this review
Pro Privacy ON (login to see reviewer names) on August 14th, 2013
Dual Edge is a fooler and entertaining trick for lay people.
They don't see the ending coming and is the classic "lead them down the garden path and then turn the hose on them" scenario.
0 of 1 magicians found this helpful.
Did this review help you? Do you want to respond to this review?
Bestsellers