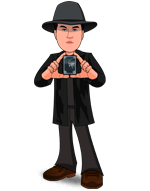 Today, when you order "Fulton's Clip Joint Playing Cards by Brad Fulton", you'll instantly be emailed a Penguin Magic gift certificate. You can spend it on anything you like at Penguin, just like cash. Just complete your order as normal, and within seconds you'll get an email with your gift certificate.

Inspired by vintage Los Angeles and Film Noir, Fulton's captures a time and place where men were men, women were dames, and the next deal could be your last.NOW SHIPPING.

Post WWII Los Angeles. In the dead of night you enter Fulton's, a clip joint hidden in the murk of downtown. Take your seat and stash your heat; your drink is on its way. Smoke curls along the crown molding and lingers in the air. What little light there is tingles through the vapors as a femme fatale appears between the shadows. She'll be by soon. Get cozy, you're in for the night - it's either that or put up a fight. In a few hours your boys will join you. For now, a deck of cards from inside your coat is tossed on the table and your fedora set aside. As broads sit and sip, gents go for the grift. Are you in?

Fulton's Clip Joint Playing Cards celebrate our fascination with cinema, history, and the art of the grift. Taking inspiration from vintage Los Angeles and Film Noir, Fulton's captures a time and place where men were men, women were dames, and the next deal could be your last.

These limited edition playing cards feature original artwork by Dan Phillips and are beautifully encased in a linen box with embossed ornaments and foil stamping.

Classic and timeless Report this review
Verified buyer Pro Privacy ON (login to see reviewer names) on February 27th, 2014
I am very pleased with this Deck.

This Deck is classy, elegant and subtle with a slight touch of nouveau which for me would place these cards between the mid 1920's and early 1930's.I speaking about the ornate pip work which you will find out and from the elegant cat jokers

I enjoy when the artist interpertation is not far from the classic format of your classic English style playing cards we all know and love but yet pushes it just a bit farther and I mean just enough with out going over board.That is what I want from these designer cards and meny other artists miss the boat complete and fall in the drink and get eaten up by card sharks...well ,not this guy.I am a fan of his work.

THese are very ELEGANT cards and they feel nice to the touch.

I believe these cards could be well sought after collectables in the future.They are that classy

These are elegant cards.
Did this review help you? Do you want to respond to this review?
Bestsellers