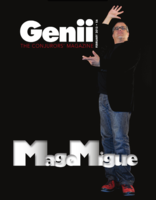 Today, when you order "Genii Magazine: February 2013 ISSUE", you'll instantly be emailed a Penguin Magic gift certificate. You can spend it on anything you like at Penguin, just like cash. Just complete your order as normal, and within seconds you'll get an email with your gift certificate.

The oldest and most respected magic magazine on the planet. ORDER TODAY AND GET DANI'S TRICK FREE.

Genii Speaks by Richard Kaufman
On the Slant by Jon Racherbaumer
Now Performing
The Genii Session The Ten Best Card Tricks … Ever by Roberto Giobbi
The Chamber of Secrets The French Flying Cards by John Gaughan
DaOrtiz a la Carte! The Suit Freely Thought Of by Dani DaOrtiz
The Expert at the Kids’ Table You Simple Humans with Your Simple Brains by David Kaye
International Property Law and Magic Imitation, Law, Ethics, and the Community by Sara Crasson
Cardopolis Straight to the Point by David Britland

Good Magazine Report this review
Verified buyer Pro Privacy ON (login to see reviewer names) on December 23rd, 2017
Go for it
Did this review help you? Do you want to respond to this review?

Awesome Report this review
Verified buyer Pro Privacy ON (login to see reviewer names) on March 15th, 2013
Love the penguin promos with free magazines. I wouldn't have bought a magazine otherwise but will always be tempted to spend more in the cart to get one for free... is that wrong?
Did this review help you? Do you want to respond to this review?

How Sweet It Is!! Report this review
Verified buyer Pro Privacy ON (login to see reviewer names) on March 7th, 2013
Weather you are a novice, amateur or a performing professional, a subscription to Genii magazine is a must. The archive section alone is worth the cost of the annual rate. If you were to practice medicine or the law, you would subscribe to magazines of your chosen profession. Genii magazine is the publication for magicians, as the the New England Journal of Medicine is for doctors. Furthering your education is a must for all, even if it is for our own pure enjoyment!!!
Did this review help you? Do you want to respond to this review?
Bestsellers