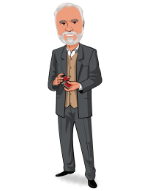 Today, when you order "Glorious Deception by Jim Steinmeyer", you'll instantly be emailed a Penguin Magic gift certificate. You can spend it on anything you like at Penguin, just like cash. Just complete your order as normal, and within seconds you'll get an email with your gift certificate.

"I consider Jim the most brilliant mind in magic. He's a very deep thinker, and he understands the psychology of magic and how to create wonder." -Doug Henning

In a biography woven from equal parts enchantment and mystery, Jim Steinmeyer unveils the secrets behind the most enigmatic performer in the history of stage magic, Chung Ling Soo, the "Marvelous Chinese Conjurer" - a magician whose daring made his contemporary Houdini seem like the boy next door. Soo's infamous and suspicious onstage death in 1918 mystified his fellow magicians: he was shot during a performance of "Defying the Bullets," in which he attempted to catch marked bullets on a porcelain plate. When Soo died, his deceptions began to unravel. It was discovered that he was not Chinese but a fifty-eight-year-old American named William Ellsworth Robinson, a former magicians' assistant and the husband of Olive Robinson. But even William Robinson was not who he appeared to be, for he had kept a second family with a mistress in a fashionable home near London.

Here is a look at the rough-and-tumble world of turn-of-the-century entertainments, the West's discovery of Oriental culture, and Soo's strange descent into secrecy as he rose to stardom-written by the foremost chronicler of magic's history and culture. Due to the scandals surrounding Robinson's death, this is the first time his full story has ever been told.

This book is a great value! Report this review
Verified buyer Pro Privacy ON (login to see reviewer names) on August 25th, 2013
Steinmeyer is a solid writer who breathes real life into a story from long ago. He looped me in very quickly and kept me going from start to finish, staying up and reading this book (way too late) until I was done. I was blown away at my first foray into magic history; the detail, depth and overall entertainment value was simply great! Jim, you are truly a stellar author, thanks So Much for the great read and keep them coming!
Did this review help you? Do you want to respond to this review?

Steinmeyer is truly unique! Report this review
Verified buyer Pro Privacy ON (login to see reviewer names) on July 20th, 2013
I already had read the book, talked about it for years, and recommended to others. Penguin's deal made me the proud owner of the book easily!
Did this review help you? Do you want to respond to this review?

Great book, and full of magic Report this review
Verified buyer Pro Privacy ON (login to see reviewer names) on May 24th, 2013
This is a great read, especially for magicians. The description of Harry Kellar and Alexander Herrmann racing through the Midwest with William Robinson tagging along was really inspiring. There are some great magic performances recreated in the book that will make you feel as if you were there. Highly recommended!
Did this review help you? Do you want to respond to this review?
Bestsellers