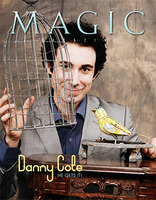 Today, when you order "MAGIC Magazine: January 2013 ISSUE", you'll instantly be emailed a Penguin Magic gift certificate. You can spend it on anything you like at Penguin, just like cash. Just complete your order as normal, and within seconds you'll get an email with your gift certificate.

COVER: Danny Cole — He Gets It!

He started gaining attention as a teenage magician from Southern California, but today, Danny Cole performs all over the world. And he has turned his talents toward creating unique magic effects for Internet viewers. To date, he’s released ten of these short videos — and we’ve got ‘em all on MAGIC Plus. Danny has also given us an exclusive behind-the-scenes look at his most recent head-scratcher!

An Evening with Harry By Joe Givan & Carol Massie-Givan

Magic. Mayhem. Mystery. Murder? Maybe. Maybe not. One thing’s for sure: somebody’s dead, and the art of magic may have something to do with it.

The scene is the Trocadero Vaudevilles theater at the 1893 World’s Fair in Chicago. Florenz Ziegfeld Jr. has hired Harry Robenstein to perform his magic in a variety show, alongside a number of other acts. Things get hairy for Harry when another magician barges onstage and cuts the wire Harry uses to raise his Hindu Rope in the air. The interloper is the young Erik Weisz. He exposes Harry’s method, claiming that he, Erik, will be the greatest magician in the world. Robenstein is enraged that this young man not only exposes his magic, but that Erik wants his spot in the show! And he gets it, replacing Harry with his own magic and escape act. What follows is an interesting and hilarious battle of two magicians trying to make it in the world of showbiz.

Alana: The Girl Just Wants to Have Fun By Jaq Greenspon

It’s a magician’s nightmare. You’re set to go onstage at FISM for your competition slot. Standing in the wings with your act loaded, you psych yourself up to go out there and wow the crowd. You see your name on the screen, you hear the microphone turn on, and you take a deep breath. This is it. And then the announcer says that there will be a half hour intermission, and before you can even register your shock and surprise, the house is half empty and you’re left with thirty minutes in which to psych yourself back up again. That’s exactly what happened to Alana Moehlmann, one of the German participants at last year’s FISM in Blackpool, England. And yet, a half hour later, she took the stage and wowed the crowd.

Taking Another Look at Houdini’s Movies By Chris Philpott

Houdini’s movies are a fascinating but neglected part of his legacy. The conventional wisdom about these movies is that the stories were just excuses for his escapes and that he was a very weak actor. Story-wise, why is it a problem that the films are excuses for escapes? We don’t complain that action movies are just excuses for action scenes. The question is, are they a good excuse? A film like The Dark Knight is. Unfortunately, most of Houdini’s movies are not. As for Houdini’s acting, yes, it’s awful in spots, but most of it is fairly good and there are moments of emotional honesty, power, and charisma that hint that maybe, if things had gone a little differently, Houdini might have become a real movie star.

Wayne Houchin suffered first-degree burns on his scalp, face, and right arm while taping a television program in the Dominican Republic on Monday, November 26. The injuries came at the hands of the host of the show, who doused Houchin with a flaming liquid.

In February 2000, Robert E. Markwood was found guilty of the second-degree felony of indecency with a child, stemming from an incident with a boy in January 1999. He was released from prison last February, having served the full twelve-year sentence. Bob Markwood, now 67, showed up in the media recently, when the Inside Edition television show did a segment on registered sex offenders who are still working as children’s entertainers.

Steve Truglia’s The Card Shark Show debuts at the Mayfair Theatre in London, over 50 invited magicians from 22 countries took part in the first International Magic Carnival in Beijing, Wittus Witt realizes his dream of presenting public exhibitions of his private collection, and Fantasma Toys opens its Houdini Museum of New York.

New Tricks for a New Year
An all-card issue, with two impossible locations: Pete McCabe’s The Watchman is an impossible location that requires a special “something extra,” while Trapper Keeper achieves a similar result with a regular pack. Josh Janousky gives us One Card Monte, an interesting take on a card change, and Ernesto Melero and Christian Grenier share pet moves to add to your toolkit.

Singer Zinger
A seemingly impossible piece of direct mindreading is featured in this month’s “Loving Mentalism.” Under test conditions, a spectator concentrates on one photograph chosen from eight possibilities. You then tell him exactly which image he is thinking of. You can do this from across the stage, without even looking in the spectator’s direction and with none of the usual methods in play — no force, no ambiguity, no electronics, and no preshow. The powerfully deceptive principle is extremely subtle and highly versatile.

#12. Take a Bow!
The closing of your act or show should be clean and well structured. The show should be riding a steadily increasing momentum that builds to a crescendo and leaves the audience wildly excited and enthusiastic about you. But the show is not over until you exit the stage. The same care that is given to planning your act should go into crafting your bow, as well.

Wooly Bully, or How I Learned to Stop Worrying and Accept the Clown
Do you remember Play-Doh, Etch-a-Sketch, X-ray Specs, Sea Monkeys, and the game Clue? These are more than toys; they are art, as important as the simple Campbell’s soup can that Andy Warhol immortalized. When an audience sees one of these objets d’art, which have never been out of production since they were created, there’s an instant emotional hook, a bonding with the performer.

And We’re Off!
When Stan Allen and I first talked about my writing a twelve-part series celebrating the golden anniversary of the Magic Castle, we agreed it shouldn’t be a chronological account of events, but rather a collection of stories about the movers, do-ers, and finger-flippers who somehow worked together to make the Castle and the Academy of Magical Arts a unique success in the world of magic. So let’s turn back the clock to the morning of January 2, 1963. We had announced that the Magic Castle would open its doors to members and guests at 6 p.m. Were we ready? Hell no!

Protecting Your Assets
Theft is a horrible thing. I remember an instance from my childhood, when my brand new bicycle was stolen by one of the “big kids.” At the time, that bicycle was my most treasured possession. I felt victimized, helpless, and angry. For most of the magicians I know, the magic routines they have created are among their most treasured possessions, so the theft of these routines by other performers can leave them with similar feelings of helplessness, anger, and mistrust. The good news is that the law can provide some protection for our creations.

On the Road Again
In order to gain a greater appreciation of magicians who don’t live in Los Angeles or Las Vegas (I’m told there are many), I piled my two dogs — Zsa Zsa and Goulash — into the car and headed out on an 8,000-mile road trip. I’m no stranger to the road. I pride myself on expert packing, but the first night, I couldn’t find my cell phone charger and tore apart everything in my SUV looking for it. And so it begins. The first rule of travel: there will be problems.

The Myth of Mentoring
A couple of years ago, a documentary was released that IMDb.com describes as “a coming of age journey set in the quirky subculture of magic.” Make Believe followed six young magicians who competed in the Teen World Championships, held in conjunction with the 2009 World Magic Seminar in Las Vegas. It is an excellent film that shows what it takes to make it in the dog-eat-dog — or perhaps rabbit-eat-rabbit — world of high-level magic competitions. It is also a film that encapsulates some of the problems I see in the world of magic today.
Questions about this product