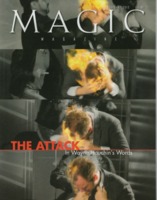 Today, when you order "MAGIC Magazine: February 2013 ISSUE", you'll instantly be emailed a Penguin Magic gift certificate. You can spend it on anything you like at Penguin, just like cash. Just complete your order as normal, and within seconds you'll get an email with your gift certificate.

COVER: Wayne Houchin After the Fire By Alan Howard

Toward the end of November, Wayne Houchin was appearing with Curiosidades, a group of magicians who get together annually for a series of performances in the Dominican Republic. On November 26, the thirty-year-old Houchin suffered first-degree burns during the taping of a television program in the capital city of Santo Domingo. The burns came at the hands of the host of the show, Franklin Barazarte, who had a "spirit water" known as Aqua de Florida poured into his hands then set ablaze; Barazarte then dumped the flaming liquid onto Houchin's head. The incident made news worldwide, but many questions remain unanswered. To fill in as many details as possible, Wayne Houchin talked to MAGIC Magazine from his home in Chico, California, on December 20, 2012, just three and a half weeks after the incident.

Daniel Madison of the Lions Den By Jamie D. Grant

Barnsley, England: 1998. There was no way Daniel Madison could have known that within two hours he'd be lying in a deserted parking lot, unconscious, with three broken ribs, a broken kneecap, and two broken bones in his right hand — the hand that was, at this moment, shuffling three Kings to the bottom of a deck of cards while in a game of five-card draw. In addition to being a real-world card cheat, Daniel went on to become a magician and a teacher of card techniques to conjurors and hustlers both. A shady past evolved into a shadowy present, all based on his skills with a pack of cards

La Maga Lupe: A Backstage Life in the Spotlight By Alan Howard

When Guadalupe Maria Ah Chu was twelve or thirteen years old, she spent Saturday mornings watching a children's television program that was broadcast from her hometown of Panama City, Panama. After telling her mother that she intended to be on that program, young Lupe took a bus to the television station and asked where she could find the producer of the show. A secretary said he was out to lunch at the moment, but told Lupe the name of the restaurant. "I just went there and saw him," Lupe recalls, "and said, 'I want to be on your TV show.'" When he asked the girl what she would do on the show, she answered, "Magic." Throughout the years since then, Lupe Nielsen's fascination with conjuring — along with a history of excelling at tasks no one else wanted to take on — have gained her unique experience in staging, performing, and building magic.

Peter Matz on the Music of Doug Henning By John Armato

Some time capsules are accidents. A micro-cassette of a phone interview recorded by a young writer in the mid-1980s lay untouched in forgotten files. Two cross-country moves and a quarter of a century went by before it was rediscovered. The tape preserved comments by Peter Matz, one of the entertainment industry's most prolific composers, arrangers, and conductors, about creating music for Doug Henning, one of the most important magicians of the 20th century. Henning left us in 2000; Matz was gone just two years later. But through this accidental time capsule, we have one more piece of history to add to the archives of magic, a glimpse into the collaborative process of a world-class magician and a world-class musician that is as relevant to performers today as it was when the interview was first recorded.

The biggest surprise in Germany last year was the successful tour of two young magicians who were totally unknown to the public: the Ehrlich Brothers. The tour began on December 3 in Berlin, then traveled to 29 more cities, playing 2,000- to 5,000-seat venues. Amazing. Besides this large-scale tour, there were two additional magic shows running in well-known German variety theaters from November to January and into February.

Seen, But Not Heard, 'Round the World

On Saturday, December 22, 2012, a deaf audience in Beijing, China, gathered at a local club for their annual holiday party. Beginning at 2:30 in the afternoon, American magician Simon J. Carmel performed a ten-minute act for the eighty Chinese attendees. Carmel was later told that the audience was "deeply astonished and excitedly screamed aloud when I demonstrated the color changes of the fanning cards, and four other colorful and stunning tricks." Simon had to be told of the reaction he received, not only because he, too, is deaf, but because he was on the other side of the world, in his home in West Palm Beach, Florida.

The Magic Castle, the clubhouse of the Academy of Magical Arts, originally opened its doors at 5 p.m. on January 2, 1963. Irene soon-to-be-Larsen was still cleaning things with Windex; Nancy Keener was sweeping out the lobby; and Snag Werris was racing in with the first delivery of booze that was held up waiting for approval of the liquor license. On January 2, 2013, fifty years later, things were a lot different!

A Late Holiday Present
Professional magician Will Fern tips three of his workhorse pieces for us this month, including two routines that are totally different in effect but rely on the same principle. Jeff Prace offers an effect with chewing gum, and Harapan Ong surprises us — and our spectators — by offering a way to suck up a playing card through a drinking straw.

Clairvoyaint
A very direct and inexplicable piece of "hands-off" psychic divination is on offer in "Loving Mentalism" this month. Several spectators, genuinely chosen at random (by someone else, not you), write personal information on pieces of paper. These are folded, gathered, and mixed (by someone else) and one of them, selected at random, is sealed in an opaque envelope (by someone else). Impossible as it may seem, without going anywhere near this envelope, you identify exactly what is written on the sealed billet and who wrote it. No stooges, no forces or glimpses, and nothing involved except normal pen, paper, and envelopes you could obtain anywhere!

There's a Signpost Up Ahead. Your Next Stop, The Comfort Zone
Being able to do your sleights and secret magic stuff with confidence so that they don't require a lot of your attention is great, because it frees you up to think about other things, such as — oh, say, entertaining people. But your act? From my experience, people who flaunt the "do it in my sleep" attitude like it's a badge of honor have earned that badge. I've seen their acts, and that's exactly what it looks like: they're sleepwalking onstage, just going through the motions. Not only are they not there, they're a million miles away. They look bored.

Fifty Years of Fine Food, Fun, and Failures
From the day we opened the door of the Magic Castle fifty years ago, we envisioned a grand club offering a new meeting place for magicians and magic aficionados. Part of that vision was to offer fine food and beverage service. We had our liquor license, and I built a faux turn-of-the-century bar. We hired a bartender. That was easy. It never occurred to us that taking an old house with a residential kitchen and turning it into a restaurant might be a tad more challenging. It was!

The Power of the Press Release
Chances are, if you saw a story about a celebrity in a newspaper, magazine, on television, or online, that story probably started as a press agent's press release. Press releases can be an extremely cost-effective form of advertising, raising your profile in a given market by generating media coverage. You don't need to escape from a straitjacket while hanging upside down or do a blindfold drive to get media coverage (though such publicity stunts can get great results when properly promoted with press releases). This article will show you how to act as your own press agent by creating press releases and getting them into the media pipeline for your market.

Fresh
Russ Merlin is one of Las Vegas' most reliable killers. He performed his comedy mask act approximately a thousand times in one year and in almost every one of those sets, he killed. His act packs into a small satchel and as soon as there are four chairs onstage and the mic is turned on, he is ready to go. Fourteen minutes later, he's done. Kills. Over and over and over again. He craves the monotony. He is a killing machine. Until one day — they seemed to laugh a little less. And it happened again the next day. And for the next two weeks he was a good act, but not a great act. The Big Red Flag went up.

A Trick So Dangerous
"Before I go, I would like to share with you a trick so dangerous that the late Harry Houdini himself would not even perform it — stopping the bullets!" Last year I closed 109 performances with those exact words. I estimate that I have performed this trick over 300 times. The carefully scripted words are in a constant state of readiness, primed for delivery. One hour before a corporate show in Fremont, Nebraska, on Saturday, December 15, 2012, with the gun and paintballs neatly arranged onstage, I made the decision to cut it, as 36 hours earlier, tragedy surprised our country again when Sandy Hook Elementary school in Newtown, Connecticut, experienced one of the most horrific school shootings in history.

Y Magic?
Hollywood is rife with big name stars who were also magicians. Yet none of them became famous for performing magic. Instead, they achieved their fame as actors, writers, singers, dancers, and musicians — but most of all, comedians. Peruse the list of well-known celebrities who were also magicians and you'll find a large percentage of comedians, which suggests to me that the branch of magic they probably were most attracted to was that of the comedy magician. The curious thing is, if we take the word "comedian" out of the phrase "comedy magician," we're left with the very interesting question "y magic?" Why do we apparently have to give up magic on the way to stardom?

We're All TV Magicians Now
Put a good-looking trick on the market and all the old guard magicians will ask you the same question: "Is it a worker or just a TV trick?" A TV trick looks good on video, but isn't practical to perform in the real world, whether due to lengthy setup or extreme angle restrictions. Ten years ago, TV tricks were useful only to — well, to magicians who actually appeared on TV. That was before Facebook and YouTube.
Questions about this product