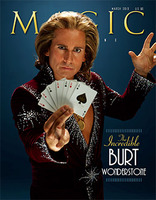 Today, when you order "MAGIC Magazine: March 2013 ISSUE", you'll instantly be emailed a Penguin Magic gift certificate. You can spend it on anything you like at Penguin, just like cash. Just complete your order as normal, and within seconds you'll get an email with your gift certificate.

COVER: Looking at Magic with a Magic Eye By Shawn McMaster

Magicians are the focus of Steve Carell's latest comedy, The Incredible Burt Wonderstone, which opens in theaters this month. Shawn McMaster discovered that the folks behind the film have something of a history with magic, and a love for it that allows them to both honor and parody the art.

He's a performer, dealer, manufacturer, lecturer, and creator of magic. But Mark Mason is first and foremost a pitchman. Countless hours running carny games and extolling the virtues of household products have honed his spiel and audience psychology — useful assets in the magic business.

Taking Advantage of the Opportunity By Jaq Greenspon

Doug McKenzie is a magician with an international upbringing and a technological bent. This combination of background, skills, and interests serves him well as a performer and as a consultant to several high-profile conjurors around the world.

That's How It All Began By Mark Kalin

If a magician is fortunate, he or she might become known for a signature piece — an act that is immediately associated with a particular person. How do these career-defining routines come about? There is no one answer, but Mark Kalin asked half a dozen magicians "how it all began."

Twenty-five of the United States' finest professional close-up magicians — and one from England — entertaining Medal of Honor recipients at an Inaugural Ball.

A reunion of some of the more than 2,000 graduates of the Magic Castle Junior program.

MAGIC Magazine's listing of "Conventions at a Glance."

Reports on La Grande Magia competition in Italy and Magic Outlaws on the Travel Channel, plus remembrances of Imam Hossain and Kees Schoonenberg.

Woodyland by Woody Aragon
Pack Small, Play Big: The Tradeshow with Dan Harlan
Quadrant by Brandon David and Chris Turchi
The Ultimate Control from Happie Amp
Wayne Dobson & Friends by Wayne Dobson
A Baxt, a Boy, and a Bucket with Robert Baxt
Angel by Chris Knudsen
Modern Intricacies by Yoann
The Dance with Brain Platt
Profile and Skewer by Garrett Thomas
iProject with Alan Rorrison
The Evolution Deck by Bob Solari
Milbourne Christopher: The Man and His Magic by William V. Rauscher
Lotto Square by Leo Smetsers
Seeking the Bridge by John Born
The Multiple Revelation Project by Andi Gladwin and Rob James
Dunninger's Complete Encyclopedia of Magic by Joseph Dunninger. Out of print.
Shirt Pulling Trick from Abbott's Magic Co.

Discipline
This month, we explore a fabulous interlude with ESP symbols, suitable for close-up or stage, as well as Curtis Kam's new take on a prop you probably haven't used since you first started in magic: the Ball & Vase. J.K. Hartman, Jesse Rijpkema, and Zane Kinkade round out the issue with powerful card routines.

The Psychic Gift
This month's slice of mentalism is simple, direct, and lots of fun. A spectator is given over two dozen sealed greeting cards. Inside each card is a message promising a gift of some kind. With the cards in her own hands, the spectator freely chooses whichever card she wants. The cards she did not choose are opened and read out, and all the gifts they mention are absurd or humorously unpleasant! When the spectator opens the card she selected, she sees that you predicted she would choose that card, and she wins the nice box of chocolates that has been on your prop table all along.

Let's Not Make a Big Production Out of This
I don't have a lot of use for the "now it's empty, now it's full of silks" kind of production, but I still love the gadgetry! I also have a longstanding obsession with the most entry-level "packs flat, plays big" production prop: U.F. Grant's Temple Screen. I have come up with several routines for it, none of which involve silks. I also haven't given up entirely on productions, but they need to make sense and have an element of surprise and humor behind them. I think this month's offering fits the bill.

Nobody's Pirfict! Fun and Follies
My late brother, Bill Larsen Jr., always called me "Mrs. Winchester." After inheriting the Winchester rifle fortune, Sarah Winchester was told by a spirit medium that she should build a home for the spirits of all the people killed by Winchester guns — and that she would join the spirits if she ever stopped building the home. For 38 years, the round-the-clock sawing, sanding, and hammering at her San Jose mansion never ceased. I guess Bill's comparison was well founded. In the fifty years of the Magic Castle, we have never stopped sawing, sanding, and hammering.

YouTube Exposé: A Different Perspective
The most significant benefit the Internet provides us is the ability to get back to mentor-student relationships.

Who Do You Think You Are and What's the Big Idea?
Whatever type of magician you are, no matter how "real" and believable your personality, when you are onstage you are not a real person. You are a theatrical character. Your theatrical character can be a realistic character, but it is a character nonetheless.

Just a Theory
"I know how you did that," the spectator exclaims upon seeing the magician cause a coin to vanish. "It went up your sleeve." The magician mentally carves another notch in his magic wand and counts this performance as a victory. The spectator has been fooled. The coin didn't go up the magician's sleeve; he used a hook coin. The half dollar is safely hidden behind his lapel. He succeeded in deceiving the spectator. How could anyone see it any other way?

Shut Up Already About How Magic Shops are Dead
Old Guard magicians spent the last decade lamenting the creeping extinction of the brick-and-mortar magic shop. Well, I have some news. The magic shop lives. It moved. It's online now.
Questions about this product