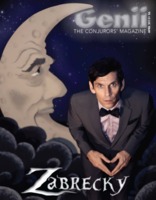 Today, when you order "Genii Magazine: April 2013 ISSUE", you'll instantly be emailed a Penguin Magic gift certificate. You can spend it on anything you like at Penguin, just like cash. Just complete your order as normal, and within seconds you'll get an email with your gift certificate.

The oldest and most respected magic magazine on the planet. This month's feature is the strange an unusual Rob Zabrecky. ORDER TODAY AND GET THE FRED KAPS "FLICK" FREE.

The Art of Switching Decks: A Guide for the Beginner and the Expert by Roberto Giobbi
Liber Mentis: Psycrets British Society of Mystery Entertainers 2007-2012 by Steve Drury
Seeking the Bridge: Further Principles and Techniques for the Sophisticated Magical Artist by John B. Born
Videos Reviewed by Joe M. Turner
The Art of Presenting Magic to Children (3-disc set) by Danny Orleans
European CoinMagic Symposium Volumes 3 and 4 by Giacomo Bertini
David Blaine: Decade of Magic (2-disc collector’s set) by David Blaine
Karrell Fox: The Legend by Karrell Fox

Be sure to check out the Rob Zabrecky PENGUIN LIVE Lecture!

CAN'T COMPLAIN ABOUT THIS FREE PROMO!!!!!!! XD Report this review
Verified buyer Pro Privacy ON (login to see reviewer names) on February 14th, 2014
Well, what can I say! As mentioned in the title, this was Penguinmagic's free promo when you spend over a certain amount (free promo back in April of 2013 when I had ordered a few things). I really can't complain about this at all! This magazine contains some fairly useful content! It has the latest news on the best tricks, reviews for some of those tricks and it even has information from other magicians, some card trick tutorials as well as advertisements for tricks so you can read about new tricks; thus this magazine will act as a guide and help magicians scan through a variety of effects (not readily available if you were to go on the internet and blindly look for anything to add to your act. Sometimes you really don't know what to look for in an effect and have to go hunting/reading every effect until you come across something good, but this magazine saves you that trouble) that they can read on and decide whether they would like to add certain effects to their performances/which effects to exclude. Overall, this is a fairly good magazine which should be considered even after the month and year of April 2013. The magic reviews and wide variety of magic trick advertisements is well worth the price of this magazine alone.
Did this review help you? Do you want to respond to this review?

update yourself! Report this review
Verified buyer Pro Privacy ON (login to see reviewer names) on May 18th, 2013
this is more than just a magazine, every month Genii Mgz shares a huge bunch of ideas and stunts. Besides, it's always giving us every-new detail in the magic world! If you deem yourself as a no-ordinary conjuror, what are you waiting for? Get it every month, or even better..Subscribe!
You'll feel like a total-pro magician while reading your magazine. I can bet that.
Did this review help you? Do you want to respond to this review?

Its OK Report this review
Verified buyer Pro Privacy ON (login to see reviewer names) on May 9th, 2013
I cant see paying money for it. Free with my last penguin order. It isnt totally invaluable. I just didnt find it impressive. 3 Stars from me because I could see this magazine being more enjoyable to someone else.
0 of 1 magicians found this helpful.
Did this review help you? Do you want to respond to this review?
Bestsellers