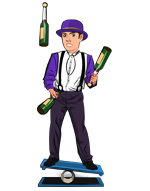 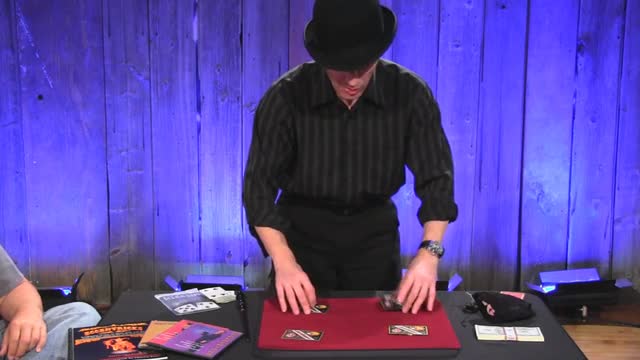 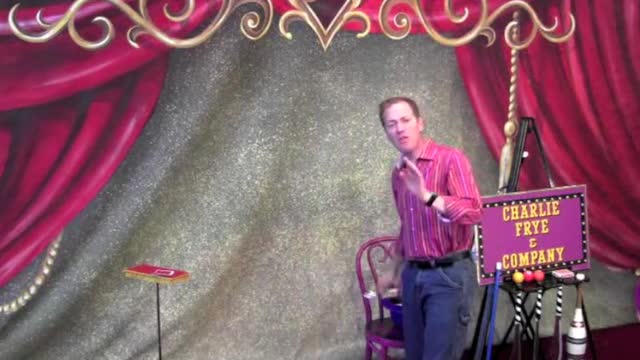 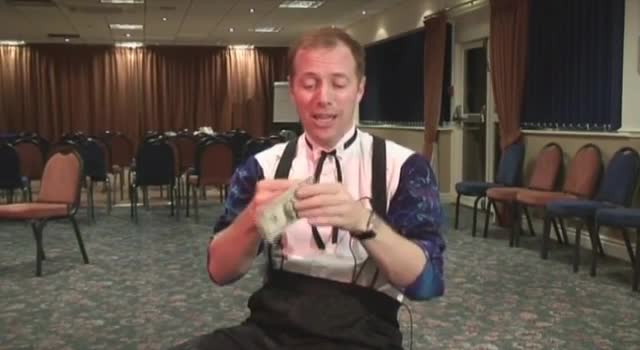 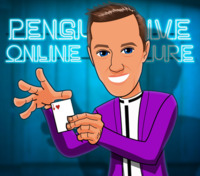 Today, when you order "Charlie Frye LIVE", you'll instantly be emailed a Penguin Magic gift certificate. You can spend it on anything you like at Penguin, just like cash. Just complete your order as normal, and within seconds you'll get an email with your gift certificate.

One of the world's most entertaining magicians is came to Penguin for an incredible 3-HOUR live event. SUPPORT LIVE MAGIC. DOWNLOAD THE FULL LECTURE TODAY.

"Simply one of the best and brightest acts ever" -Liza Minelli

"The most amazing, entertaining, and enthralling I have ever seen! Charlie Frye's skills and talents are extraordinary! I was simply mesmerized!" -Uri Geller

Acknowledging America's rich vaudeville tradition, Charlie Frye & Company synthesize virtuosic skills and a passionate love of their art into something classic yet undeniably fresh -- something that astounds even as it entertains.

For the last twenty-odd years (some odder than others), Charlie and his wife Sherry have been delighting audiences worldwide with their singular blend of silent comedy, magic, juggling, slapstick, and acrobatics. Charlie is often compared to classic comedians such as Charlie Chaplin, Buster Keaton, Stan Laurel and Dick Van Dyke.

Together, they have thrilled audiences around the world --Australia, Africa, Europe, Asia -- in many exotic venues. Return engagements are common; so are appearances before distinguished audiences such as the Royal family of Monaco, and the Sultan of Malaysia. Besides being one of the world’s most sought after American specialty acts, they are also in constant demand throughout the United States, where they were named Las Vegas’ Specialty Act of the Year for their star billing in the Folies Bergere. Other prestigious appearances have included opening for Liza Minnelli, starring in the internationally syndicated television special, "The World's Top Shows", and a featured appearance in Tom Hanks' film, "That Thing You Do."

Charlie Frye’s first desire was to grow up to be Batman. But since that didn’t work out, he chose to follow in the footsteps of his father and grandfather who were both clowns. Right away, he knew that he had some pretty big shoes to fill.

Running away and joining the circus, he soon met Sherry who was a showgirl, aerialist, and classically trained ballerina. Her studies began at age 14 when she was accepted to the prestigious North Carolina School of the Arts. It wasn’t long before she hung up her pointe shoes to join forces with Charlie, who left the sawdust behind after Lou Jacobs -- one of the world’s greatest clowns -- told him that it was time to strike out on his own.

For a short while, Charlie performed on the streets of New York City, laying the groundwork for an act that was soon to land them on the stages of Nevada’s top casinos. Shortly after arriving in Las Vegas, they became close friends with the legendary George Carl who was to become their most ardent supporter. Other inspiring friendships were soon to follow, and perhaps it is this connection to the greats of the past, and his close relationships to the best of today, that has enabled Charlie to become a variety artist of unmatched skill and mastery. Renowned throughout the world for the versatility of his talent, when it comes to combining world class juggling, sleight of hand, and physical comedy, no one does it better.

Whether it’s showrooms, television, corporate events or Lectures Charlie Frye never fails to keep audiences laughing and applauding all at once.

If you've never been to a magic lecture, theres never been a better time. Sunday May 5th at 7:00pm, were live-streaming Charlie Frye in a spectacular 2-hour interactive online lecture. Watch, ask questions and learn things you won't find in any book or DVD.

WEALTH OF TOP NOTCH MAGIC & CREATIVITY! Report this review
Pro Privacy ON (login to see reviewer names) on May 6th, 2013
Charlie and I performed in the same show in Malaysia last year for several weeks, and during that time he gave a special lecture for the magicians there. He could have performed, talked, and taught for another 5 hours beyond what he did, and the audience would still be hanging on every word and movement. His ideas are absolutely delicious and his level of magic and manipulation is quite high. His lectures range from hilarious sight gags, physical comedy bits, and easy magic effects to wonderful, well thought out routines that will take a bit of practice but are well worth it. His lecture audience went completely nuts for what he showed them with cards, balls, coins, hats, money, and more. Close-up to stage effects, and all of them winners. Highly recommended!!!
5 of 5 magicians found this helpful.
Did this review help you? Do you want to respond to this review?

DO NOT miss this lecture Report this review
Pro Privacy ON (login to see reviewer names) on May 7th, 2013
Mr Frye is not only a top Performer, but a clever thinker and skilled teacher of magic. For over 3 hours he shared his knowledge that, as Heba Haba Al used to say, GTFM ( gets the #$@$%$# money ).

Charlie has given me permission to share with you a tip I use for his Color Changing Deck:

I use a joker with a breather and have that half way down in the deck. Now I can also do it right from the table and it looks like I simply cut the pack and I go into the Frye Shuffle.
4 of 4 magicians found this helpful.
Did this review help you? Do you want to respond to this review?

Best Lecture Ever! Report this review
Verified buyer Pro Privacy ON (login to see reviewer names) on April 8th, 2015
Who doesn't love Charlie Frye? He's just amazing in so many ways...cards, coins, gags,etc...the lecture has it all. His teaching style is excellent and he makes a real effort to give proper credit where due. The guy is just a true gentleman. This is, by far, one of my favorite Penguin Live lectures. I've seen Charlie Frye lecture on several occasions and I never fail to learn something new every time. But his stuff. It really is that good. Proven to work in real world conditions.
3 of 3 magicians found this helpful.
Did this review help you? Do you want to respond to this review?

fantastic Report this review
Pro Privacy ON (login to see reviewer names) on May 6th, 2013
This is a lecture that I expect to watch over and over again. I wish that he would have just kept on going.

The format felt like a jam session. He had stuff prepared, but also shared most of the items people asked about.

His variation of 'misled' with a Swiss army knife was genius. The routine using Paul Harris' Bizarre Twist culminating to a rainbow/prism deck finish was inspired, and should not have been cut from PH's Astonishment dvd set.

He had tons of bits-of-business that at times were both entertaining and also the modus operandi. He speaks the truth when the simplest miracles tend to get more accolades from spectators.

It was fascinating to see him constantly do manipulations while being interviewed by Dan Harlan. He was very open about his thoughts and beliefs. He spoke his mind about piracy and how it discourages inventors from sharing their A+ material.

The coins to glass routine was simple and magical; it's also open to variations depending on your preferences. The billard ball routine was sweetly choreographed with hardly any body loads - and the one handed shell twist was deceiving.

I'm not a fan of dice stacking, but I appreciate his thinking behind the routine. The deck stacking for a texas holding routine is a nice one. The spoon bending is incredible and pretty with all the subtleties thrown in. His take on the Juan Hundred dollar bill switch was beautiful.

There was so much variety in his lecture and I enjoyed all of it. Even though he seemed to really push the Phoenix deck a lot - I didn't mind at all. I wish he did one more hour because this jam session was fantastic.
2 of 2 magicians found this helpful.
Did this review help you? Do you want to respond to this review?

Complete Man Report this review
Pro Privacy ON (login to see reviewer names) on April 24th, 2013
Charlie Fry got a standing ovation from a theater full of Magicians at the latin American convention Flasoma, his ovation was the same that World Champion Yu Ho Jin so what you are about to see its material from a world class magician, i cannot recommend this more, after watching this guy perform at Chile i got hooked by his talent!
4 of 7 magicians found this helpful.
Did this review help you? Do you want to respond to this review?

Brilliant Report this review
Verified buyer Pro Privacy ON (login to see reviewer names) on May 12th, 2013
Charlie Frye makes the difficult look so easy.
1 of 1 magicians found this helpful.
Did this review help you? Do you want to respond to this review?

Charlie Frye Report this review
Verified buyer Pro Privacy ON (login to see reviewer names) on May 11th, 2013
I love Charlie Frye :)
He is so knowledgeable and one gets a lot from this workshop. From gambling routines, magic, dice stackers and jugglers this lecture should appeal to everyone.
1 of 1 magicians found this helpful.
Did this review help you? Do you want to respond to this review?

1 of the best lectures so far Report this review
Verified buyer Pro Privacy ON (login to see reviewer names) on May 9th, 2013
I have seen all the Penguin lectures ,this is one of my favorites so far,a great all-round Magician,a must have !
1 of 1 magicians found this helpful.
Did this review help you? Do you want to respond to this review?

Wow Report this review
Verified buyer Pro Privacy ON (login to see reviewer names) on May 9th, 2013
I was sad when the lecture ended. The question and answer session alone was worth the price.
1 of 1 magicians found this helpful.
Did this review help you? Do you want to respond to this review?

Very clever magician Report this review
Verified buyer Pro Privacy ON (login to see reviewer names) on May 7th, 2021
I purchased this primarily to learn his coin tricks and he does perform and explain them, but too quickly for my taste .I like his bill switch sold separately a lot and he is a real force of nature with jokes and gags and nonstop tricks, but most of them I would not do so I will have to go back and rewind the coin tricks again and buckle down to learn them.
Did this review help you? Do you want to respond to this review?
Load more reviews
Bestsellers