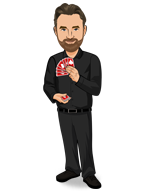 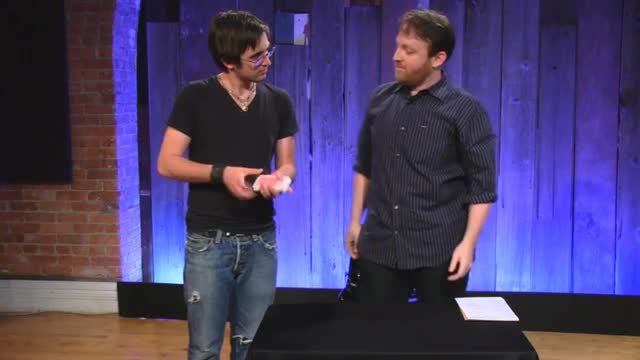 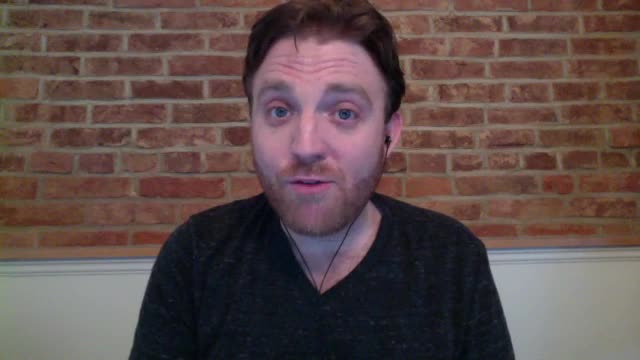 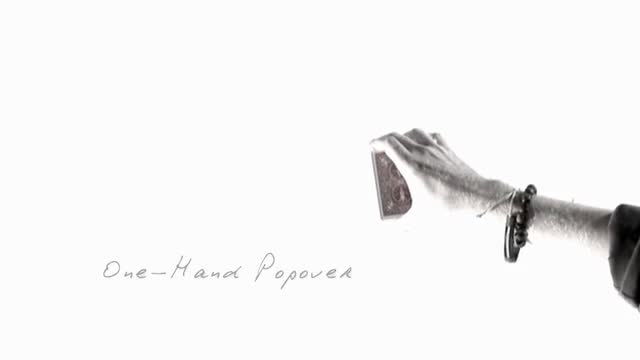 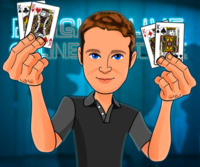 Today, when you order "Aaron Fisher LIVE", you'll instantly be emailed a Penguin Magic gift certificate. You can spend it on anything you like at Penguin, just like cash. Just complete your order as normal, and within seconds you'll get an email with your gift certificate.

One of the most best card magicians ALIVE came to Penguin for a MASSIVE 3 1/2 hour live event. SUPPORT LIVE MAGIC. DOWNLOAD THE FULL LECTURE TODAY.

"Aaron is one of the few people that have it all. Aaron does magic that even makes magicians' jaws drop. He fools me every time I see him." -Chris Kenner, Executive Producer, The Magic of David Copperfield

"One of the best card men to come along in twenty years." -Larry Jennings

"Aaron Fisher's lessons rank with the best magical instruction I've ever seen. Like a hip college prof coaching his students for finals, he teaches both moves and theory, helping all magicians to reach the next level." -Jerry Dunn

Aaron teaches card magic. And there's a simple reason why he loves to do that. It's because he loves to learn card magic. The thrill of seeing improvement, no matter how small is a thrill that never, ever fades for the serious performer.

But he discovered while he was still in high school that learning card magic can be a great deal more complex than it looks. Between the ages of 16 and 18, he met his first real card experts: Jack Birnman and Peter Galinskas. Jack taught him about creativity and its role in card magic — including the notion (unbelievable to him at the time!) that you were allowed to change, or alter, the moves you read in magic books. But you had to have good reasons for doing so. Peter taught him what those reasons were.

While he was in college at UNLV in Las Vegas, Aaron was in the perfect laboratory to continue these lessons. he studied theater during the day and worked on close-up magic the rest of the time. While he lived there, in the city that's most synonymous with our art, he learned from several of the great names in card magic: Larry Jennings, Michael Skinner and, of course, Johnny Thompson, The Great Tomsoni. From these men he learned that true creativity comes only from a solid grounding in our craft; and so they impressed upon him the rigors of study, the importance of the classics, and the need to seek that ever-elusive concept of naturalness that makes sleight of hand so beautiful.

Aaron continued learning as he continued working. In 2002, the same year that his book, The Paper Engine, was published, he decided to become a full-time entertainer. Since that time, the satisfactions he has experienced as a performer have inspired him to impart what what he has learned to a new generation of magicians.

Aaron knows all too well, after all, of the many pitfalls and missteps that can derail anyone who attempts to learn the craft of sleight-of-hand. He's read misleading books filled with bad information. He's taken advice that turned out to be wrong. He's spent countless hours learning sleights and techniques that turned out to be of no use at all. All of these experiences have convinced him that no matter how many books or DVDs we own, there is simply no substitute for an effective teacher — a living, breathing guide — to help us on the journey.

That's why, in addition to his performance schedule of corporate events, nightclubs, and stand-up stage shows, Aaron spends time every year helping card magicians improve. Each summer, for example, he works with magic campers at Sorcerer's Safari Summer Program in Ontario, Canada. He also continues to present his lecture/seminar at magic clubs, societies, and conventions all over the world. And he offers one-on-one personal coaching to serious, dedicated students.

For Aaron, it is seeing these students improve that makes teaching magic worth the effort.

If you've never been to a magic lecture, theres never been a better time. Sunday May 19th at 7:00pm, were live-streaming Aaron Fisher in a spectacular 2-hour interactive online lecture. Watch, ask questions and learn things you won't find in any book or DVD.

Outstanding lecture Report this review
Pro Privacy ON (login to see reviewer names) on May 20th, 2013
For those who are considering purchasing this, this is what was covered (I'm sure I've missed some things, and this only covers the first three hours of the lecture, not the 45-minute Q&A section that followed):

This list doesn't give a feel for the overall themes of the lecture, which are what makes it so good. At one point Aaron talked about "the intersection of technique, misdirection, structure and presentation," and I really think the lecture was a masterclass in that.
11 of 11 magicians found this helpful.
Did this review help you? Do you want to respond to this review?

Something for everyone. Report this review
Verified buyer Pro Privacy ON (login to see reviewer names) on May 19th, 2013
I've got to say that the lecture started out slowly for me--the effects that Aaron was teaching were easy in the beginning and I was looking for a good technical challenge (a mindset that Aaron went on to confront in the lecture).

As we got deeper into the 3.5 hours of information and material, the tricks became more advanced to the point where I had to put my cards down and just watch. There is something for EVERYONE in this lecture. From great tips for beginners, to tricks and theory for intermediate magicians like myself, and even for working pros like our host, Dan Harlan.

I'm sure others will post more about the content, but Aaron shared an enormous portion of his own personal material that you can buy on Penguin, or on his website. If you're interested in value, you get way more than your money's worth on this one, which was extremely generous of Aaron in my opinion.

A very fun lecture packed full with great stuff. Do it!
6 of 6 magicians found this helpful.
Did this review help you? Do you want to respond to this review?

Great For the Pass Report this review
Verified buyer Pro Privacy ON (login to see reviewer names) on November 12th, 2013
If you want to learn the pass I highly recomend this. f you have no intrest in the pass then there is really only one trick on here you will enjoy, called Search and Destroy.
3 of 4 magicians found this helpful.
Did this review help you? Do you want to respond to this review?

Okay tricks, bad instruction Report this review
Verified buyer Pro Privacy ON (login to see reviewer names) on May 21st, 2015
I have purchased a lot of these lectures, but I did not enjoy this one. Aaron drove me crazy, This is the first one I have never finished. I give it a 2 because the tricks were pretty good, as long as you have an expanded coin shell. If you don't you can skip the first hour. Of course it's my opinion but I just found him very annoying.
2 of 4 magicians found this helpful.
Did this review help you? Do you want to respond to this review?

This is a must-watch for anyone in magic, from beginner to pro Report this review
Verified buyer Pro Privacy ON (login to see reviewer names) on October 25th, 2021
This is easily the best Penguin Live lecture I've seen yet. The tricks you learn are worth the price of admission, but the sheer amount of knowledge shared during this lecture is just astounding.

This is a must-watch for any card magician and even if you aren't a card magician, I'm positive you'll learn something from this lecture- even if you never plan to touch a deck in your act.
Did this review help you? Do you want to respond to this review?

i v seen about 40 lectures.
And for card magic there are very good lectures at pinguine. For me the most important are:
-Dani DaOrtiz
-Lennart Green
-Joe Barry
-Shin Lim
-Allan Ackerman
-Andi Gladwin (for learning a good second deal, double lift)
-Paul Gordon for easy to do but very strong magic
-Michael Vincent
-Howard Hamburg

But in my opinion this is the best card magic lecture on pinguine.

Everything is doable (sometimes challenging) but possible.
There is stuff for beginners and for experts but everything is wonderfull astonishing card magic.
Did this review help you? Do you want to respond to this review?

Good material Report this review
Verified buyer Pro Privacy ON (login to see reviewer names) on April 28th, 2017
Very good information and effects
Did this review help you? Do you want to respond to this review?

Upbeat and informative Report this review
Verified buyer Pro Privacy ON (login to see reviewer names) on October 12th, 2015
Of the several Penguin lectures I have, this lecture really strikes a balance between great tricks and great theory. Definitely recommend.
Did this review help you? Do you want to respond to this review?

Plenty of good material Report this review
Verified buyer Pro Privacy ON (login to see reviewer names) on September 21st, 2015
Your going to need a couple of things,a deck of cards (obviously). But also oddly enough one coin and some house pants! As aaron brings you some awesome card material and theory not just in card magic but in presentation. Dont worry you get some awesome card tricks and sleights aswell. Highly recommended for all card monkeys!
Did this review help you? Do you want to respond to this review?

The Magicians' Magician Report this review
Verified buyer Pro Privacy ON (login to see reviewer names) on May 26th, 2014
I have to say that this, for me, was the one that changed the whole game. This Penguin Live is the one you will have to watch no less than 15 times and did I mention you will never get tired of it! Aaron Fisher is quite possibly the best card man on the planet, but moreover, his grasp of magic as a whole and the effects of structure, blocking, and attention management makes him a magician's magician. There are very few people that can hold your attention for 3 and 1/2 hours, and Aaron does it masterfully. You won't want him to stop!!! Buy this now!!!
Did this review help you? Do you want to respond to this review?
Load more reviews
Bestsellers