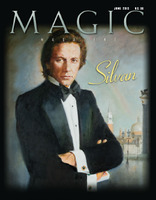 Today, when you order "MAGIC Magazine: June 2013 ISSUE", you'll instantly be emailed a Penguin Magic gift certificate. You can spend it on anything you like at Penguin, just like cash. Just complete your order as normal, and within seconds you'll get an email with your gift certificate.

When young Aldo Savoldello continued to practice magic against his father's wishes, his family had to give in to the fact that the boy would become a performer. It wasn't long before his magic and manipulations took him to television and around the world, making his one of the most famous faces in Italy.

Creating his own acts rather than copying other magicians' work resulted in some of John Taylor's strongest routines. Now he's a staunch proponent of defending intellectual property, known for his protection of his most famous illusion, Suspended Animation.

Lauded as "the thinking man's talk show host," Dick Cavett has provided wit and intelligent conversation on television and other media for five decades. But he started as a magician, and he's remained an enthusiastic promoter and practitioner of the art ever since.

Joel Ward wanted to be an illusionist, and loves close-up. His magic has taken him from table-hopping in restaurants to television to starring with Ringling Bros. circus. Lately, he has settled into a comfortable style doing fun, interactive parlor magic, with some original comic twists.

We begin "Talk About Tricks" this month with Adam Rose's intriguing coin and chewing-gum transposition, and then we explore a coin-roll flourish by Marc Simpson. Cameron Francis delivers a terrific card sequence, and the issue is rounded out with card handlings by Steve Draun and Rob Gardner.

You take a beautiful rose out of a vase, smell it, and admire its beauty. You place the bud in your left hand and hold the rose horizontally, with a hand on each end of the stem. The leaves are pointing to the left side. Concentrate on the leaves. Slowly and visibly they begin to change directions and end up pointing to the right. You open both hands to show that the bud is now on the right end of the stem!

A parlor game forms the basis of this month's routine. Four spectators join you onstage. By a random secret process, three are designated as "angels" with a clear conscience. One is designated as a "killer" with a guilty conscience. Just by asking them questions and observing their responses, you can unfailingly spot the guilty party. The routine is played for laughs rather than mystery, but nonetheless the question remains: how can you reliably spot signs of a guilty conscience from the other side of the stage?

Bent on Deception By Mike Bent
Spring Cleaning: How Not to Let Your Act Die Under the Weight of Its Own Clutter

By the time you read this, it will almost be summer. Here's your last chance to do some spring cleaning — and I don't mean cleaning out your basement (although that's probably a good idea). I mean cleaning out your act. Stand back and take a good long look at the material you're performing. Ask yourself some simple questions. Is your act neat and tidy, or is it a mess? Are you happy with all your material or are there things that really need to be fixed? Are you hanging on to jokes and bits that have no practical use? Are there old, stock, or "appropriated" bits you're only doing out of habit, even though you know you shouldn't? Depending on your answers, you may need to de-clutter your act.

The random word technique can be very effective when you need a fresh perspective on a creative problem. Maybe you're staring at a blank page and don't know where to start, or maybe you're halfway into a project when you reach a creative bottleneck and don't know how to squeeze past it. To get "unstuck," a bit of randomness might be just what you need.

50 Years at the Castle By Milt Larsen
Another Magic Castle? Don't Shake the Wagon!

Over the years, we've had many opportunities to open another Magic Castle. For one reason or another, that never happened. One very significant reason was that we were really struggling to stay afloat in the early days. Plus, we didn't have time or inclination to take on another "Impossible Dream." We came very close at times, but plans never jelled. After all this time, we still haven't gotten around to it. But there's always the future.

For What It's Worth By Mark Kornhauser
Smoke Signals

I'm no psychic, even though I sometimes play one onstage, but common sense often foretells the future just as well. By the year 2020 (or much sooner), there will be pot cabarets and pot nightclubs, pot cruises, and a pot-pourri of pot parties everywhere. Blue and red states (okay, not Utah) will legalize and regulate marijuana. Entertainers will explore the newfound limits of social acceptance and cater to a new sensibility. It may very well be that the rich sensory experience of a magic show will have a unique appeal to those people who are fascinated by mind-altering adventures. Add a munchie buffet and you might even revive dinner theater.

Paynefully Obvious By Payne
It Can Happen

I'd heard the story of magician who was so awful that whoever booked him vowed that they'd never hire another magician. I always thought it was just one of those cautionary tales. After all, it couldn't be true. Who would be so narrow-minded as to let one unpleasant experience with a magician tarnish all the rest of us? But then I learned firsthand that it can and does happen.
Questions about this product