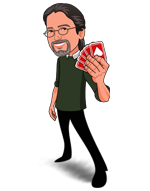 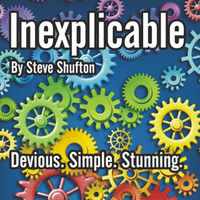 Today, when you order "Inexplicable by Steve Shufton", you'll instantly be emailed a Penguin Magic gift certificate. You can spend it on anything you like at Penguin, just like cash. Just complete your order as normal, and within seconds you'll get an email with your gift certificate.

A SINGLE card is placed in an UN-GIMMICKED envelope. A normal deck is dealt FACE-UP. They stop WHENEVER they want. Your prediction MATCHES! NOW SHIPPING. HIGHLY RECOMMENDED.

"Steve Shufton's 'Inexplicable' will deeply bother people. Its combination of principles results in a method that is straightforward, streamlined, and, above all – practical." -David Regal

"INEXPLICABLE is one of the few magic effects that really matches the description in the advertisements. I like it a lot and I think you will like it too. I can do it and you can do it. I use it and you will use it. It's really amazing magic. And that's no hype." -Steve Dusheck

"Inexplicable is an ingenious method. The hands off approach and open prediction seems impossible. I'm going to have to get a couple just to have backups. If you keep the prediction in your wallet, you can borrow a deck and pull out your prediction made before you arrived at a party for an impossible impromptu effect." -Kenton Knepper

"A prediction is placed on the table - the spectator stops on any card - the prediction proves to be 100% correct. Steve Shufton provides one of the most elegant sleight-free solutions to this plot in recent times. The deck is regular and the prediction method is ingenious, resulting in an effect that is, indeed, 'Inexplicable'." -Peter Duffie

"Steve Shufton is known for his lateral thinking and clever application of a variety of principles from magic and mentalism. Inexplicable is just that! An incredible open prediction that is fair, straightforward, and seriously baffling! This is a real worker that will go straight into the repertoire of the serious professional." -Dr. Todd Landman, PhD, AIMC, FRSA

"Inexplicable is exactly that....In fact I would have called it TOTALLY Inexplicable. Steve has come up with a radical new approach to this effect and as a result has created one of the best methods I have ever seen to achieve it." -Marc Paul

"Beyond the Inexplicable effect and Inexplicable's method, which is very well explained, there is a third Inexplicable component. The price! How can Shufton possibly sell this jaw dropper for only ? Perhaps it is because magicians so often pay more for convoluted gimmicks that will most likely end up in that dreaded box destined for the magic flea market than for a very well thought out, cunning release. Don't let the very reasonable price fool you. Properly done, exactly as Steve teaches it, you will have a very powerful card effect that really will come across as ... Inexplicable!" -Richard Busch

There is a SINGLE card in an UN-GIMMICKED envelope. She will deal cards FACE-UP from a NORMAL deck. She will stop WHENEVER she wants. Your prediction MATCHES! This will leave them stunned.


A spectator is shown a small envelope, just large enough to accommodate a playing card. In fact, it contains a single playing card. This prediction is left in full view on the table (or in her hand). This is the final prediction. It will never be switched!

The spectator is handed a normal deck of playing cards to carefully examine. In fact, you can use ANY deck - nothing is added or taken away. She can see the deck is normal, well mixed, and there is truly nothing out of the ordinary - nothing to hide!

She is told to deal cards into a pile one by one, from the top of the deck, face-up onto the table (or another spectator's hand if you would like). She is told to stop whenever she wants. It couldn't possibly be more fair!

Eventually, she stops dealing on a particular card. It was a truly free choice!

With empty hands, and with no sleights of any kind, the envelope is opened. There is a single card within - the same card that has been there from the start. The envelope is shown to be otherwise empty - as it truly is. THE PREDICTION MATCHES HER CARD!

It is so much fun, so easy to perform, and truly devastating!


You NEVER touch the cards - the spectator has full control of the deck at all times.
Questions about this product

Controversial release Report this review
Pro Privacy ON (login to see reviewer names) on July 31st, 2013
This trick has been controversial for many reasons.
First: The ad is borderline. The spectator cannot stop WHEREVER she wants. Strong spectator management skills are required to control the outcome. And like everything sooner or later it will fail, so be prepared with a proper out.
Second: the prediction card could have done better.
Third: there are better versions out there, there is really nothing "revolutionary" or "new" about this one.
You might like it, you might not, at the end is matter of taste. There are IMHO better open predictions out there.
8 of 8 magicians found this helpful.
Did this review help you? Do you want to respond to this review?

disappointing Report this review
Pro Privacy ON (login to see reviewer names) on September 14th, 2013
As already written, the blurb is misleading. The spectator can´t stop wherever he wants. Second, the prediction card can´t be shown completly and the envelope where the card is inside doesn´t look like a normal envelope. There are much better and less risky versions of the same outcome - try one of these versions they are much better than inexplicable.
5 of 5 magicians found this helpful.
Did this review help you? Do you want to respond to this review?

old methods are better Report this review
Verified buyer Pro Privacy ON (login to see reviewer names) on July 12th, 2013
After rcieving this I'm not convinced this is the best or easyist method to perform the stop prediction effect. The common Sven. deck costs less and provides a similar outcome.
4 of 5 magicians found this helpful.
Did this review help you? Do you want to respond to this review?

Worked Flawlessly First Times Out Report this review
Verified buyer Pro Privacy ON (login to see reviewer names) on July 17th, 2013
It seems a little bold at first, but the author states it has worked consistently. I can say the same for my first two times out of the gate. The author gives some tips for handling at the end which I didn't do but I plan to the next time I use this. Very pleased with the purchase.
2 of 2 magicians found this helpful.
Did this review help you? Do you want to respond to this review?

Very original effect Report this review
Verified buyer Pro Privacy ON (login to see reviewer names) on July 12th, 2014
Don't listen to the negative reviews - I've been doing magic for 20+ years and this is a great effect. Do you need to be a little aggressive? Yes. Do you need to be good with audience management? Yes. This is not a self-working / simple trick. I'd say this is similar to a Paul Harris style effect - mind blower / head scrambler, but you gotta work for it.
1 of 1 magicians found this helpful.
Did this review help you? Do you want to respond to this review?

BRILLIANT card revelation! Report this review
Pro Privacy ON (login to see reviewer names) on July 3rd, 2013
Inexplicable is a little black envelope, just large enough to hold a playing card. And inside it contains a deadly secret!

I opened it up and just smiled. BRILLIANT!

This is not a card trick. It is a mind crushing miracle that packs flat and plays BIG!
2 of 4 magicians found this helpful.
Did this review help you? Do you want to respond to this review?

Powerful! Report this review
Verified buyer Pro Privacy ON (login to see reviewer names) on July 23rd, 2013
Use this as a stand alone effect.. it'll be hard to follow with another card trick! Although if you really want to, you could, since the deck is ungimmicked. This can even be done with a borrowed deck (even though a bit of prep work will be needed - the only reason this doesn't get five stars) However, for the price, you can't go wrong!
Did this review help you? Do you want to respond to this review?

YES! Report this review
Verified buyer Pro Privacy ON (login to see reviewer names) on July 11th, 2013
The beauty of this lies in the fact the deck is 100% UNGIMMICKED! ALL the heat is on the deck in a trick like this and you can have it examined before and after the effect. I would be suspicious of the envelope and the prediction card but the handling should eliminate any suspicion in a spectator's mind. This is a very good technique for the Holy Grail type open prediction effect!
Did this review help you? Do you want to respond to this review?

Inexplicable is Right Report this review
Verified buyer Pro Privacy ON (login to see reviewer names) on July 10th, 2013
Got it, and in five minutes did it, worked perfectly. Did the trick again for another person, they picked a different card, worked perfectly. WOW I LOVE THIS TRICK
Did this review help you? Do you want to respond to this review?
Bestsellers